Cake and Hammers: Frank Underwood Has a Word for Kirsten Powers

Here we are, a bare week out of Lent, and the Christians are banging on one another, as we too often do, this time about whether or not Christ Jesus would bake a wedding cake for a same sex couple.

It all started with Kirsten Powers, writing at USA Today, declaring that Christians wanted to go all Jim Crow against gay couples, and adding “Maybe they should just ask themselves, “What would Jesus do?” I think he’d bake the cake.”

Powers followed that up with another indictment, this time in the Daily Beast, and several scolding rebuttals have thumped on her for her pieces. I think some of them are a combination of hyper-defensive, overly-emotive, and — when the persecution card is played — in need of a strong dose of perspective.

I get why people are tempted to go there, and I completely understand how threatened people of faith are feeling in the face of social upheaval — I’m a Catholic watching the government and the press collude against nuns for the sake of politics, so I get it. It is remarkable how quickly things have changed in the short time since President Obama (and, much later, Mrs. Clinton) evolved on this issue.

Still, I’d advise people to read John Allen’s excellent report on what Christians are actually enduring, world-wide, and what Powers has admirably written, herself, before they fling about the P-word.

Powers might benefit from hearing some of her Christan sisters and brothers — really hearing the uncertainty that underwrites their noise — before using that other P-word, too.

We are all Pharisees and Publicans in our turns, after all.

I’ve likely spent too much time watching House of Cards, but when I read her first piece, I heard Frank Underwood drawling in my head, “but Kehsten, you caint sway uthuhs to yo’ way of thinkin’ by swingin’ a hammah with Jim Crow written awl on it, not with such ughleh his’treh. It’s just a rhetorical bridge too faahh, now you’ve got to trust me ohn this…”

I think it was, too, even though I agree with her that the bills under consideration, particularly in Arizona, seem rather broad, and that Jesus — if the choice came down to serving or excluding — probably would bake up a fine old Lane cake (with enough shinny to make ever’one tight) for a same-sex couple. I say so in my piece over at First Things, today.

While Jesus socialized with those the temple priests would condemn, and healed the “unclean” lepers, he used those opportunities to teach about the love of God and the wideness of God’s mercy. A soul opened to God’s love begins to love God in return, and — for the sake of that love, and in honor of that mercy — eventually conforms life and manner to God’s will.

Jesus’ service, then, was a means to gentle evangelization and that is perhaps something these Christian businessmen and women should consider, even if it seems counterintuitive to the character of evangelization, as Americans understand it.

Powers ends her piece writing, “‘What would Jesus do?’ I think he’d bake the cake.”

Perhaps he might; it seems to me that baking a cake for a same-sex wedding, even if one does not agree with the concept, may well come under the heading of walking along a road for two miles with someone who “presses you into service” for one.

But perhaps he wouldn’t; all we can do is make our best guesses.

My piece isn’t really about Powers’ argument, though. It’s more about how lost we have become as we have sought out “tolerance”, and how we might deal better with each other, if we reacquainted ourselves with what we used to know:

It’s too bad that laws and courts must become involved with what used to be the simplest of lessons: Not everyone thinks the same way, but everyone is entitled to their opinions; if that kid won’t play with you—or that baker will not make your cake—someone else will, so just kiss them up to God, and move on. Or, as Jesus told his apostles when he sent them off to preach the good news, “Whatever place does not welcome you or listen to you, leave there and shake the dust off your feet, in testimony against them.”

And it is a caution against too-quickly dismissing the notion of an individual’s right to his or her own conscience.

The right to honor one’s individual conscience is no small thing to be shrugged off, or misconstrued as an excuse for ignorant behavior in the face of prevailing law. Who among us would blame a launderer (of any creed or background) for refusing to clean the sheets of a KKK member? Would anyone suggest that Rosa Parks had no business thinking for herself when a bus driver told her to get up from her seat?

I actually cover a lot of ground in the piece, both literally and metphorically, so you might want to read the whole thing.

As Frank Underwood might say, “Ah promise, ah’m not tryin’ tah make anyone mayad. Least of all Jesus.”

Except, you know…I mean it.

February 24, 2014
Harold Ramis and the Touch of the Mensch
Next Post 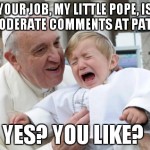 February 26, 2014 Culture Wars: It's all fun and games until someone gets hurt
Browse Our Archives
get the latest from
Catholic
Sign up for our newsletter
POPULAR AT PATHEOS Catholic
1

A Virus of a Film: A...
Steel Magnificat
Related posts from The Anchoress