Douglas-to-Dust: Feeling Helpless About the Homeless

Douglas-to-Dust: Feeling Helpless About the Homeless May 19, 2014 Elizabeth Scalia

New York City is such a microcosm of every aspect of the human experience — and the human condition in all its vagaries of darkness and light — that if one is halfway awake and paying attention, it is impossible not to, at some point, have your world-view challenged, or your spiritual bell rung. I recently related how getting clocked at Penn Station has changed everything for me, though not always in a good way.

Recently, Tom Zampino, a lawyer working in the city, had one of those moments, and he writes about it, here:

Truth be told, the homeless have always frightened me. They cross my line of vision and I become defensive: is this guy on drugs? Is she drunk? Will he turn violent if I stop to give him some spare change, in a less-than-heroic effort both to assuage my guilt and, perhaps, earn for myself some cheap “karma”?

This Easter season finally drove home to me the reality that I have good reason to be frightened, but of my own failings. Every person out on the street is a flesh and blood reminder of my constant failure. We are charged, after all, to find Christ amid them: “Whatever you did not do for one of the least of these, you did not do for me” (Mt 25:45).

Well, their numbers are surging again here in New York. The homeless cannot be avoided and they shouldn’t be ignored.

As a practical matter, for every street person that I may stop to talk to, or manage to throw a quarter at, or for whom I buy a cheap cup of coffee, there are at least ten more whom I choose to ignore, and many, many more that I don’t even see. I can’t think of anything more frightening.

Here is just one true story. I am compelled to record it as a reminder to myself that every street person has been, and may well still be, loved by someone; each was a child with a future; each retains no small amount of dignity, no matter how or why they ended up here on the streets. It is also my small tip to Dorothy Day, who witnessed so much more than this every single day.

I asked his name, and he responded, “Douglas.” Not Doug. He had worked in construction and looked as if the last shred of pride had been pounded out of him some time ago. Originally from Chicago, he found himself in New York for love—a love that had rejected him, a love that “didn’t even wait” for him.

Reeking of booze at eight in the morning, Doulgas would attempt to shut out the world by sleeping in a CVS delivery doorway, on Third Avenue. Lacking a small bill, and not wanting to part with a twenty that he would probably just spend on more alcohol anyway, I walked past him, but slowly enough so that I could hear him asking for help, and read his handwritten plea. I had only recently learned that in New York City, a handwritten sign declaring their misfortune could protect the homeless from being charged with panhandling.

Two blocks away, I ordered a takeout breakfast for myself, still thinking about Douglas. With a five-dollar bill among my change, I felt compelled to walk back to him. By then, his eyes were closed and his head was resting on his dirty yellow backpack. Rousing him—he had no cup or box in which to leave money—I said, “Hey buddy, I have something for you.” He opened his eyes, and he gratefully received the small treasure. He blessed me: “May you have many, many children. And may all of your children have many, many children.” I thanked him.

In a gravelly, smoke- and drink-wrecked voice, he told me that he was completely alone. “Look at me—I have no one. No one loves me. My mom loved me. But she was the only one.”

Read the rest, here. It may go down like medicine, but it’s necessary medicine. 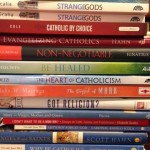 May 17, 2014
Blegging What to Read, Retreat Topics, Book Subjects
Next Post 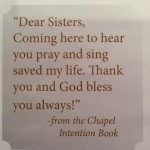 May 20, 2014 A Joyful Community of Intercessors Needs a Bit More Space - UPDATED
Browse Our Archives
get the latest from
Catholic
Sign up for our newsletter
POPULAR AT PATHEOS Catholic
1

Guilt Tripping and Manipulation: A Catholic Campaign Strategy?
If someone's go-to political strategy is to warn people that they are...
view all Catholic blogs
Copyright 2008-2020, Patheos. All rights reserved.