So, I owe some apologies. If you’ve asked me to review your book, or to read your pdf, or to write a book for you, and I haven’t gotten to reading it, or offering assessment, or um, writing the thing due in August, I am really, really sorry.

I truly intend to do all of those things, or most of them, and have them done by the end of summer. Right now, there is just an awful lot of material coming in, breaking stories, very long workweeks, exercise regimes, prayer hours, boatloads of email, a recent family wedding (Elder Son and Kitty got married!) lots of traveling/speaking, a husband who likes to spend time with me. You know, life — poorly time-managed and in need of a personal assistant. As Darcy says on A and E, “I will conquer this!” 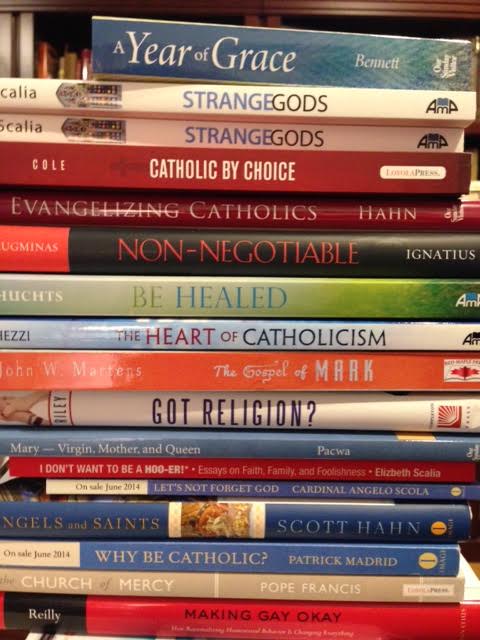 Toward that end, I’m hoping to take one or two of these with me to read on the long flight to Israel that is already haunting my dreams, and not in a good way:

I know, Strange Gods is in there, too — just forgot to shelve the new ones that contain the study guides, which I’m really happy about.

Speaking of which, If I did a weekend retreat on Idols and Prayer, would you attend?

Anyway, I don’t want to have to think about this, so I’m asking your help: which book should I read? I already know that I want to bring Richard Cole’s Catholic by Choice, which the Patheos Book Club covered and several friends have personally raved to me about, and my kindle is already loaded with Fr. James Martin’s most apt book, so let’s choose another two from the pile:

Looking from the bottom up, we’ve got Robert Reilly’s Making Gay Okay:How Rationalizing Homosexual Behavior Is Changing Everything which is pretty timely. The way my schedule is running I may not otherwise get to it until October, when Eve Tushnet’s book releases. That’s called Gay and Catholic: Accepting My Sexuality, Finding Community, Living My Faith is a very good book that will challenge many. I wonder if reading them together might be an interesting idea?

Pope Francis’ The Church of Mercy looks like a pretty pithy read, and I think it was Kathy Schiffer who told me that His Holiness writes a lot about idolatry within it, so you know it’s up my alley. And mercy, of course. I need to learn mercy.

The prolific Patrick Madrid, who was once sneered about as “someone named Patrick Madrid” by someone who should have known better, is doing what he does best with Why Be Catholic?: Ten Answers to a Very Important Question. He’s hoeing the rows for the New Evangelization.

I’m seriously considering bringing Scott Hahn’s Angels and Saints: A Biblical Guide to Friendship with God’s Holy Ones, because Madonna mi, I do really hate to fly and if I’m going to be calling on all of the angels and saints to be with me, I might as well study befriending them!

“Let’s Not Forget God” writes Cardinal Angelo Scola, and hey, if we’re talking angels and saints, yeah, let’s not forget him, or the foreword by John L. Allen in Let’s Not Forget God: Freedom of Faith, Culture, and Politics. (And if you still haven’t read Allen’s book which I rave about, here, why haven’t you? It’s not beach reading, so get to it!)

I noted to some friends today that I’m really very pleased with how I Don’t Want to Be a Hoo-er turned out, and I’m considering collecting all of my writing on gay issues and publishing them in a similar fashion. What do you think? Should I bother?

May is Mary’s Month and she has been a very good mother to me and to my sons, into whose care I placed them when they were born, perhaps I should bring Fr. Mitch Pacwa’s Mary — Virgin Mother and Queen.

Got Religion?: How Churches, Mosques, and Synagogues Can Bring Young People Back looks interesting, but I am currently reading Christian Smith’s Young Catholic America: Emerging Adults In, Out of, and Gone from the Church, and too much of this at once might make my go ‘splody.

John W. Martens’ The Gospel of Mark is definitely one I want to read — I love his writing — but I can’t help feeling like I want to read it on a deck, in summer, when fireflies are flitting and a glass of something refreshing is nearby…

Bert Ghezzi is a writer whose work I’ve often encouraged you to read, and I’m strongly inclined to take his The Heart of Catholicism: Practicing the Everyday Habits That Shape Us, for several reasons, including because I think it will push me in the right direction on a stalled project of my own!

Be Healed: A Guide to Encountering the Powerful Love of Jesus in Your Life. I could use that. You?

Sheila Liaugminas is such a busy woman that even though we catch up frequently on her wonderful, energetic radio show (to which she invited me back, even though I went feral on another guest one time, she’s never mentioned to me that she’s also found time to write a book! When I saw this hit my mailbox my jaw dropped! Non-Negotiable: Essential Principles of a Just Society and Humane Culture. Those principles are vigorously, exuberantly counter-cultural, and so while the book is just released it has already garnered a dreaded “one-star” review from a true-believer of the “establishment.”

This is a good thing. As Mark Twain said, “Whenever you find yourself on the side of the majority, it’s time to pause and reflect.” I do wonder, though, particularly when it comes to life issues, if the establishment really is the majority. I think it’s not.

Another Scott Hahn book, Evangelizing Catholics. I like that title. We need it!

I love these day-by-day books like A Year of Grace, but it looks kind of thick; I like to travel light. That reminds me, though, that I’m still waiting for the day-by-day book that Margaret Rose Realy is writing!

Finally, since I’m blegging advice and recommendations, what do you folks think of the Chromebooks?

May 16, 2014
Heading to Holy Land: May I Take Your Intentions WIth Me?
Next Post

May 19, 2014 Douglas-to-Dust: Feeling Helpless About the Homeless
Browse Our Archives
get the latest from
Catholic
Sign up for our newsletter
POPULAR AT PATHEOS Catholic
1