Sometimes you read a piece like this and you want to be nice, but it takes all you got. All you got. Then you say, “Lord, save me from myself…”

And sometimes, the Lord says, “got my hands full over here in the Third World with real issues, so just be a dude and abide! In me.”

And you really try, but then you read another version of the piece, and realize that no, you cannot abide.

I cannot abide this nonsense a moment longer. I thought the IRS telling us that Lois Lerner’s hard drive and not one, not two but six other hard drives had all crashed and burned and lost every bit of data explaining why she might plead the fifth before Congress was the height of elitist contempt for the intelligence of both the citizenry and the press.

And then I read this utter nonsense from Chelsea Clinton: “I’ve tried really hard to care about things that were very different from my parents. I was curious if I could care about [money] on some fundamental level, and I couldn’t. That wasn’t the metric of success I wanted in my life.”

I want to be charitable, I do. I remember the “Hands off Chelsea” buttons people wore when the Clintons first got to Washington, and I endorsed the idea — and still do — that the children of politicians, particularly when they really are children, and not nearly middle-aged adults, are not to be treated roughly because a parent chose to enter politics. But Chelsea Clinton is 34 years-old, now and her famously tough parents have hopefully taught her how to roll with a little push-back because, yeah, she’s earned it.

Do not follow in your parent’s footsteps and try to convince the world that money means nothing to you. Money never means “nothing” to the people who cannot stop talking about it, and between your poor “not truly well off” mother, and your dad who is forever telling us that he’s happy to be a rich guy paying rich guy taxes, and now this…just stop it.

You tried really hard to care about money? And naturally you couldn’t because no good or noble person actually does that? Naturally, only greedy, vulgar people would care about money. I wonder who they might be? And do they know how offensive they are?

Come to think of it, I might know some of them, and I can hear them grumbling a bit at the moment, can you? Listen…cock your ear over here, away from Nobu, and listen to that single mom:

“She’d bloody well care about money if every time the gas and food prices go up it’s another supper of macaroni and cheese for us!”

Maybe, from your $10 million dollar pad in Gramercy Park you can hear the young couple weighed down with college debt: “She’d freaking care about money if she was living in her mom’s basement while trying to find a real job and carrying $45,000 in college loans.”

Perhaps on your way to the Hamptons this summer you can lean out — but not if you’re taking a chopper, of course — and hear the family that will be stay-cationing it for the fourth year in a row, because the “recovery summer” hasn’t reached them yet. You should be able to hear them, because the grumbling is getting pretty loud in those neighborhoods.

When you mewl in blissful ignorance about trying “really hard to care about money” all you do is emphasize that money worries are a non-issue for you. You insult every man and woman who are forced to “care about money” as they struggle to pay their bills and sacrifice so their kids can join a baseball league or take a dance class (like you did); you diss everyone who is forced to “care about money” because they haven’t had a raise in a couple of years, though costs keep rising — or because they are retired and aren’t seeing the interest income they’d planned on, and so the house is falling into disrepair, and they can’t sell it because young couples weighed down with student loans aren’t buying those fixer-uppers the way they used to.

No one minds your being rich, but have a little class about it. Don’t sit in your ivory tower — justifiably excited to be expecting the best-connected-baby in the world, with access to the finest doctors and no worries about what sort of school environment or teachers your child will have to endure — and suggest that none of it matters, as though you’d be just as happy living in a garage apartment next to 7-11 and with no immediate plans to board a private jet.

None of us should be overly concerned about money — the love of money is the root of all evil, after all, and (as Christ Jesus so beautifully put it) “Take therefore no thought for the morrow… Sufficient unto the day is the evil thereof” — and that is certainly meant for all of us to take to heart.

But with all due respect, lady, gain some self-awareness; understand what has been handed to you through very little effort of your own. Before you talk about how much you can’t bring yourself to care about money, why don’t you…check your extraordinary .0000001% of the .0001% privilege.

June 23, 2014
A culture of priestly vocation on campus
Next Post 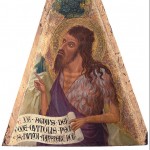