The Burke and Kasper Videos: Epic Fail All Around – UPDATED

If you’re not already fully repelled by everything in our world being politicized, this might do the trick.

Seriously, when I watched these two videos — which take a page from the political propaganda playbook — my stomach turned. I actually had a visceral reaction to the overt manipulation at work, here. Propaganda videos, complete with dark music and heavy messaging on one side and fluffy light and goo on the other, are repellent enough in in the political arena. To see them being produced as “news” for Catholic consumption — to see church teaching being subjected to slick marketing — is off-putting and insulting. Perhaps the bias was unconscious, but there it is.

I have often (and often!) said that too much Justice, unbalanced by Mercy, or too much Mercy, unbalanced with Justice, tears down the cross by we know come to know Christ Jesus and journey with him, for he is the balance of Justice and Mercy by which all things stand erect.

The upright cross, in fact, is the centering pole for the tent of our civilization, the beacon bringing light to the world. If and when the cross — which the church is charged to guard — becomes unbalanced and falls, only darkness will remain.

These videos eliminate all of that necessary balance. We see here Cardinal Burke presented as “all-[in]justice-no-mercy”: the hand with the heavy, hierarchical hammer! And clearly, we are being prompted to dislike the teaching of the church! Boooooo, Catholic church and churchmen, who want to stop debate!

Burke holds the church line, here, noting that Jesus Christ articulated the doctrine of marriage — that a man who leaves his marriage for another commits adultery, etc — and in these excerpts he comes off as being wholly against any sort of discussion as to pastoral realities. This video opens with him walking through traffic at the Vatican and his remarks are interspersed with clerical scenes: all the men giving out communion! All the be-robed men meeting and deciding! All those out touch men! There is no mercy here — no human feeling! And if Burke had any thoughts about the possibilities of annulment reform, they did not make it into this cut. The messaging is very clear: you are expected to stop thinking, to feel very deeply, and to boo Cardinal Burke!

On the other hand, Cardinal Kasper is presented as the laid back “all-mercy-what-need-for-justice-it’s-all-good” purveyor of a goo we are supposed to swallow and call sweet.

This video opens with traffic, too, but it’s ordinary people, the laity, who are walking through it. As Kasper lists the “elements of marriage” more people are walking — this time on a beach!

The messaging is again very clear, but this time you are expected to stop thinking, to feel very deeply, and to cheer Cardinal Kasper, who does acknowledge something important: that we must recognize real love as love. He says, “There is love, there is commitment, there is exclusivity, it is forever. There is a prayer life, there are children, they’re well-educated in Christian faith…”

Well, that last bit is arguable: the number of people who think a divorce instantly excommunicates them from the church — or that an annulment renders their children “illegitimate” — is shocking (and those misunderstandings destroy faith) but that’s an ignorance that should be laid directly at the church’s door. Our doctrines and teachings are sound; they are transmitted very, very poorly, particularly at the parish level, but I digress.

We see more happy families in the video — no awful clergymen in sight! Kasper does not mention Jesus at all, but appears to find his teaching uncomfortable: “to tell them that that, adultery, permanent adultery, I think they would feel insulted and offended.” As a lovely, rather WASP-y, upper-class family enjoys breakfast we hear “we must be very careful in our language [not to say] ‘you are living in a permanent adultery.”

Because…Jesus never made anyone uncomfortable?

A church that doesn’t provoke any crisis, a gospel that doesn’t unsettle, a Word of God that doesn’t get under anyone’s skin, what kind of gospel is that?
— Archbishop Oscar Romero

Kasper rightly continues that second marriages can have “positive values” but that’s not balanced out with any sense of how both positive and negative values affect the spirit. He is also correct that within the church our first word, “in every situation, is ‘yes’.” I wholeheartedly concur. But in this case, the “yes” should be — “there is always a place for you in the church, and healing in her remedies, which can bring you to the fullness of grace and restoration.”

Any other message — and in particularly the “aw, we don’t actually need to follow rules, because of Mercy” — is actually the church saying “no” to the balancing effect of Justice. And as I wrote in Strange Gods, “nothing grows in ‘no'”

We are a church of “yes”. We are also a church of great balance, and of restoration. God planned, in the fullness of time, to restore all things in Christ. Why would we not want to help our divorced and remarried brothers and sisters to move toward the fullness of that restoration, through sound catechesis — through an honest examination of how many marriages really may not be sacramental because our catechesis has been so lacking — and through the encouragement of the saints:

I know the power obedience has of making things easy which seem impossible.
–Saint Teresa

Cardinal Kasper is getting a lot of praise in social media for the allusion to a shipwreck, and his suggestion to look past our doctrine in order to give people a “plank” to hold on to.

I understand why some would find that appealing, but it’s a point-negative appeal. It suggests that there is insufficient mercy for divorced Catholics, and no place for them in the church (which is false) and pleads that they be given “a scrap” from the table, to be received upon their “plank”. I find it very troubling. Why does the Cardinal give no mention of the fact that when you have been in a shipwreck, the church does have a process by which you can have more than a plank — you actually can have a whole new ship! The process is flawed and needs reform (and yes, ideas are out there, being proposed by the laity, itself), but Kasper, like Burke, completely ignores it.

Kasper’s remarks — for all that they are encapsuled in the gooiest feel-good visuals possible — are leaving me colder than I would have expected. We are not promised a plank. We are not called to live upon a plank. We are actually called to live upon a cross, but that cross is created through the joining of Mercy to Justice. Seems to me if we are to err, we ought to err on the side of Jesus’ own words which are never wrong, and on the side of the cross.

I’ve spent more time on Kasper because his video is the more troubling of the two. It seems almost willfully disingenuous of him to say that while “this is not the fullness” of a sacramental marriage, he would suggest that a couple “follow their consciences”, which we all know can be self-deluding. Why wouldn’t he suggest that a couple work toward that fullness? Why wouldn’t he offer to walk with them through that particular part of the journey?

Why does he seem so content for people to have something that is incomplete?

But I find both videos, and both churchmen to be — as as Joanne writes, here, “unhelpful” and for a very simple reason: neither Burke nor Kasper mention a word about the healing power of annulment, or the need for annulment reform.

Why is that? I suspect that in Burke’s case, though he means well, he fears annulment reform may render meaningless the serious issue of divorce and remarriage. I think he’s wrong about that, but understand his worry.

Perhaps in Kasper’s case he too means well, fears annulment reform will put a coda to the issue and render impossible a means of addressing the serious issue of same-sex couples unable to receive Holy Communion, which eventually will have to be addressed.

We are a church seriously in need of a sustained and honest exploration of the mysteries and depths of agape love, which would in fact, have relevance to both questions — of marriage and divorce, and of same-sex unions — and which is real love, as sacrificial as any other, only barely understood by any of us.

In any event, watching the Burke video, one can understand how some would believe the church simply rejects all divorcees, without mercy, which is a harmful, damnable lie of an idea.

Watching Kasper, however, one can understand why some, running wholly on emotion, might easily believe that the Reality of the God of Second Chances negates the need for any tiresome disciplines, or teachings of the church. Again, a harmful, damnable lie of an idea.

These videos are toxic for the church, and within them the egregious politicization of a deeply pastoral issue is complete. 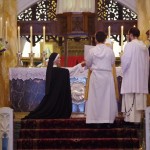