In the Land of No, “Yes” is a Most Dangerous Word 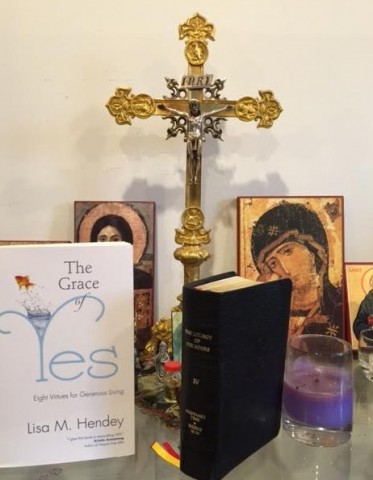 Its so much easier to say “no,” isnt it?

Its is such a “safe” place, the Land of “No.” You never have to step out of a comfort zone.

It’s very safe, but also very sterile. Here is what I wrote about the word “no” and its impact on the spiritual life, in Strange Gods:

What has “no” ever created, besides Hell? And what is Hell founded upon but the “no” born of a prideful idea of self that became an idol and drew beings, willfully, away from God. Having been offered the breadth and depth of vast creation, having lived with and for truth that is bright, alive and sometimes scary in its ever-newness, angelic beings settled for the stultifying sameness of self, and then we humans did it, too. We settled for ideas that do not grow and opportunities that do not appear. We settled for atrophied potentialities, which, perhaps, seemed safer to hoard to the self rather than offer to God, who with our every consent expands creation.
Nothing grows in “no”.

Because this is so true, I am so grateful for the release of Lisa Hendey’s new book, The Grace of Yes: Eight Virtues for Generous Living, where she lays out the power of the word “Yes” in our lives. As noted so well in the title, it is a word that springs from generosity, and unleashes it upon the world. The world itself was formed on the very “Yes” of God’s own intention, which continues to sustain it.

It was Mary’s “Yes” that began the whole pageant of Salvation in Christ. It was Jesus’ anguished “Yes” in Gethsemane that brought it to fulfillment. It was the “Yes” of the apostles, terrified and awestruck at Pentecost, through which the Church began to mission, and to grow.

Everything grows in “Yes.”

Lisa asked some of her friends to help raise awareness of the book by posting a picture of it next to a personal “Yes” in their lives. For me this was a no-brainer. Standing beside Fiat the Goldfish — who, yes, is jumping out of a martini glass, because (in my humble opinion) he is willing to jump out of his comfortable place, trusting that it he’s headed toward something better than the safe-but-sterile — is my breviary; the book containing the prayers of the Divine Office, which we are all invited to pray, daily, and which is the centering pole of my Benedictine life.

To make an oblation — and to become an Oblate — means to make an offering of one’s whole self. My oblation, made before the altar of the Lord, was a “Yes” that I had looked forward to with gladness, but which suddenly became terrifying in the distinct moment that I pronounced the words:

I offer myself to Almighty God
through the Blessed Virgin Mary
and our Holy Father Benedict
as an Oblate. . .
and promise to dedicate myself
to the service of God and humanity
according to the
Rule of Saint Benedict
in so far as my state in life permits

I had been practicing prayer and service for years in preparation for the moment, and yet when it came, that was suddenly a very scary “Yes” for many reasons, mostly because within that promise I suddenly felt very small; very unable; very unworthy.

And I am unworthy, everyday.

And it is within the willingness — articulated and demonstrated within our very act of assent, within that word “Yes” — that God finds room to work, and to bestow his graces upon the world, continually.

Such a little word.

For me, saying “Yes” changed everything. Slowly, almost imperceptibly, and continually. And thanks be to God for that, because even with all of the graces He has bestowed upon me line-by-line, day-by-day, psalm-by-psalm, I am still such a complete and utter wreck of a girl.

Imagine what I would be if I had remained in the land of “no.” Not just a wreck, but a smoldering one, threatening explosion and major damage to all surrounding me!

“Yes” has been so much better.

Read Lisa’s book; it is personal, and wise, and vulnerable. I’m just getting to the part where she relates learning about a breast cancer diagnosis. Can we say “Yes” to things like that? Does actual grace really manifest in such circumstances? In jobs that do not come, friendships that fail? Humiliations that teach?

November 15, 2014 Techno/Science Geeks Should Not be Made to Cry - UPDATED
Browse Our Archives
Related posts from The Anchoress