Well, America — pitching between lunacy and sorrow — seems to be reaching a tipping point.

The Indiana RFRA story has inspired hypocritical businessmen to declare they won’t sell their wares to the Midwestern rubes who won’t settle down and think right.

It has lured dependable establishment shills into bravely expressing the exact moral outrage guaranteed to get a cheer from the audience.

It has assured some in the press that cutting off the microphone of a guest who will not buckle down and submit is righteous and justified “journalism.”

It has tempted ambitious small-time “reporters” to survey small-town businesses until they can find someone naive enough to give an interview and thus become identified as the next-big-bigoty-bigot whom all the good people may safely hate, ala 1984. A celebration of “tolerance” ensued, wherein the “right-thinking” people rained down death threats at such a rate that the business had to close it’s doors, declaring it might never reopen.

And yesterday — egged on by the crassest of political opportunists, the gleeful media, and the endless angst of establishment-beloved-and-celebrated people who have decided that “either/or” will have no truck with “both/and” — we reached a point where a high school coach felt secure enough in the strength and sympathy of the mob to tweet out an invitation to burn down that small business, for the high crime of not thinking the same thoughts as the coach (who, apparently, with her mind on destruction thinks correctly.)

We are on the cusp of an American Kristallnacht — that tipping point where either cooler, more rational and sane heads will prevail, or the craven and the cowardly and the men who just want to watch the world burn will have their day, and a permanent underclass of lessers — judged guilty of non-conformity of thought and therefore deemed hate-permissible — is created.

Thankfully, there are a few cooler heads in media who are speaking up for “both/and” over “either/or”. Check out this column by Matthew Dowd at ABC News:

We are hungry for leaders who can say we need both anti-discrimination laws as well as laws to protect people’s religious freedom — and who make the argument that those don’t have to be mutually exclusive values. In fact, they go together, as Jesus taught us long ago.

At Commonweal, Peter Steinfels challenges the people who call themselves “liberal” to be liberal enough to tolerate some freedom of religion:

All my life liberals took the lead in defending and enlarging freedom of religion. Now they seem to have shrunk into silence, indifference, or, worse, disparagement. Contrary examples anyone?

It is ironic that the baby-boomers, who lived a conceit of non-conformity and would not permit anyone to tell them what to do, or how to think — and who brought us many decades of instruction on the meaning of “tolerance” and the notion that “diversity should be celebrated” — have been the generation to bring us to this point, where only politically correct thought is permitted. So, this week, we seem a clarification of meaning. Turns out “tolerance” and “diversity” were limited concepts, after all.

They have become the establishment, holding the reins of government, media and the academy, yet they, and the best-indoctrinated of their children, would pretend that they are still outside of it. “We are the change we’ve been waiting for”, indeed.

I am actually rather heartened to see all of the masks come off in this Holy Week, when Christ Jesus shows us his Reality. A clash of supernatural forces is always going on among us. This week, we see a little of how very ugly it all is. Reason enough to want to find some Triduum liturgy and take part in it.

Remember this? What was Auschwitz? “I don’t know.”

Related:
It has been interesting to watch Ace, who is not religious, give close and sympathetic attention, even down to noticing where the scare quotes go, to the Christians. He seems frustrated that for us withholding charity is not an option.

Twist!: Would Jesus just go to another baker? That’s actually one point I made in this essay:

It’s too bad that laws and courts must become involved with what used to be the simplest of lessons: Not everyone thinks the same way, but everyone is entitled to their opinions; if that kid won’t play with you—or that baker will not make your cake—someone else will, so just kiss them up to God, and move on. Or, as Jesus told his apostles when he sent them off to preach the good news, “Whatever place does not welcome you or listen to you, leave there and shake the dust off your feet, in testimony against them.”

Also, I’m reading tweets, from some activists urging a fast end to tax-exempt status for “uncharitable” churches. As Glenn Reynolds often says, “all is proceeding nearly as I predicted.” 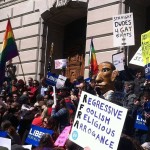 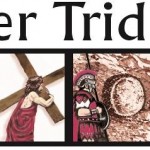 April 2, 2015 Triduum Arrives Just in Time for a World in Need
Browse Our Archives
get the latest from
Catholic
Sign up for our newsletter
POPULAR AT PATHEOS Catholic
1

Clarifying Catholic Teaching on Vaccines re:...
Through Catholic Lenses
Related posts from The Anchoress

What's Past Is Prologue
In November 1900, a fashionable, urban Polish poet from an upper-class background...
view all Catholic blogs
Copyright 2008-2020, Patheos. All rights reserved.