In the genre of “de-conversion” books, there is a Jewish sub-category of “OTD” memoirs. “OTD” is the English acronym for “Off the Derech [the path or the way]” and refers to Orthodox Jews who leave traditional observance behind. Not all of them love that appellation, but it is what’s generally stuck.

There have been many fine memoirs from formerly Orthodox Jews, most of them written by people reared in one of the Haredi varieties. One of the best is Leah Vincent’s Cut Me Loose: Sin and Salvation After My Ultra-Orthodox Girlhood. Leah appeared last year at my congregation and blew us all away. You can see her talk here.

The latest addition to this genre is the outstanding new memoir by Shulem Deen, All Who Go Do Not Return. 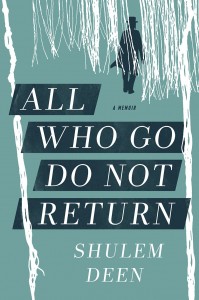 While Leah’s book gave us a glimpse into her Yeshivish Haredi upbringing, its main focus was on life after leaving. Shulem Deen comes from a completely different corner of the Haredi world, the highly insular Skver Hasidim. His story is about crumbling faith as he slowly confronts modernity. It is also one of the most interesting glimpses into Hasidic Judaism that you will ever read.

Skver Hasidim are based primarily in their own little theocratic village, New Square, located in Rockland County, New York. Deen gives a first-hand, sometimes horrifying look, at this community and its hideous value system.

We learn how many of them disdain the law, ranging from committing fraud to physically harassing heretics. We discover a level of sexual repression that is almost unimaginable. And we learn about the extremes to which its leaders will go in order to shelter members from interactions with the outside world. I thought I was pretty sophisticated in my understanding of what goes on in these communities. Based on Deen’s descriptions, I’ve been sorely underestimating them. They are much, much worse than I imagined.

Deen’s slow but growing separation from the Skver was painful. He suffered tremendously for his decision to live a life of integrity. The price he paid was heartbreaking. The most distressful part of the book comes toward the end as he describes the myriad ways in which his relationship with his five children was destroyed by his wife and her handlers. He eventually lost almost all contact with them due to a combination of faith-fueled fear and hatred. This part of the story brought me to tears.

Overall, the book presents a story of great courage in the face of unrelenting pressure to conform. In the end, he was bowed but not broken. He is a talented writer who has written a most impressive book.

I hope that some day his children will be liberated and reunite with their loving dad. He is a brave and remarkable man.

May 22, 2015 Hypocrisy, Thy Name Is Duggar
Recent Comments
0 | Leave a Comment
Browse Our Archives
Related posts from The Atheist Rabbi