Personal Reflections on a Great Day 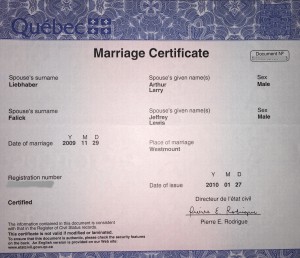 Those were the years when a woman named Anita Bryant led an attack on gay rights in my hometown.

Back then homophobic bigots like her were not condemned. Civic leaders, respected broadcasters, clergy from liberal denominations all heeded her cry to “save the children.”

I was one of those children. She didn’t save me.

Instead, what she and the narrow-minded, ignorant and unthinking people who followed her did was to consign me and others like me to an adolescence and young adulthood of shame and self-loathing.

In 2009 I traveled to Montreal to marry my partner … my HUSBAND.

And on June 26, 2015 the nation that calls itself the “land of the free” recognized the dignity of our lives, our relationships, and those of millions of other people like us.

We did not suffer alone. We had our families. We had each other. We had a growing number of supporters.

We all have people to thank.

I want to acknowledge and thank my dear daughters, the only results of my closeted life that I celebrate each and every day. They have stood by their daddy all the way.

I want to tell my dear HUSBAND, Arthur, just how much I love him. We have taken this journey together, repeatedly committing to each other from a series of domestic partnerships to our Canadian wedding and right down to this magnificent day.

And finally, I want to thank the millions of people who opened their minds and hearts to the true meaning of love. Many were once among the ignorant and unthinking, but they dug deep inside themselves to discover that they possessed the extraordinary capacity to change. This is one of the greatest possibilites of being human. And, as a result, our nation has been changed for the better.

To paraphrase Dr. Martin Luther King, Jr.: The moral arc of the human condition is long, but at times it really does bend toward justice. This is one of those times. 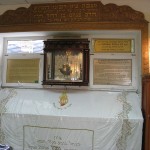 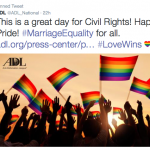