Casting and Surgery and Wheelchairs, Oh My

My youngest son, Peter, was born with bilateral clubfoot.

He was only 3 days old when he started treatment, which consisted of six sets of groin-to-toe casts (one per week for six weeks), bilateral tenotomy surgery, another set of casts, and then wearing a set of custom orthotics known as a “boots and bar.”

He wore the boots and bar for 23 hours a day for the first three months, and then 12 hours at night until he turned four years old. At that point, I thought we were done with treatment except for yearly checkups.

Unfortunately, Peter’s feet began showing signs of relapse last fall — it turns out he’s not only one out of 1,000 kids with clubfoot, he’s also among the 5% of kids with clubfoot who relapse after their initial treatment. His orthopedist prescribed SMO orthotics, and we tried those for six months. They kept his feet from getting any worse, but they didn’t correct the issue.

The next step is to repeat the treatment he had as a newborn — six weeks of long leg (thigh-to-toe) casts, Anterior Tibial Tendon Transfer (ATTT) surgery, six weeks of non-weight-bearing long leg casts, and then wearing AFO orthotics for 6-12 months.

As you can imagine, this is going to be a challenging process. Having a newborn in casts and then the brace wasn’t easy, but he didn’t seem too terribly bothered by it at the time. Now, however, I don’t think my rambunctious five-year-old is going to be very happy about needing to wear leg casts for three months.

To further complicate matters, Peter is on the autism spectrum (he was diagnosed at age 3). I’m currently making a social story to help explain to him what’s going to happen, but I’m not sure how much he’s going to understand.

He just started kindergarten earlier this month, and he’s in a self-contained autism classroom with several peers. I’ve informed his teacher about his upcoming medical procedures, and she’s on board with doing whatever they can to help ease his transition, so I’m grateful for her support.

I took Peter to a pre-op appointment just this past Thursday. He had his feet X-rayed and his doctor and I discussed his upcoming procedures. He gave us a prescription for a rental pediatric wheelchair, and that’s already set to be delivered on Monday.

Peter will get his first casts on September 11, new casts every week for the next six weeks (skipping one week because his doctor is out of town), and the ATTT surgery is scheduled for October 29. All will take place at Phoenix Children’s Hospital, where he has been receiving his clubfoot treatment since birth.

He’ll have to stay in the hospital at least overnight, possibly two nights, and will miss school most of that week. Trick-or-treating on Halloween will be dependent on how he’s feeling, and if he’s still in the hospital, etc.

In the meantime, I’m making him social stories and researching the best ways to help a five-year-old with autism in a wheelchair. My biggest worry right now is managing the bathroom. I’m hoping I’ll have the upper-body strength to lift him on and off the toilet.

We’re planning to have him sleep downstairs on our pull-out sofa bed so we don’t have to worry about going up and down the stairs, and his older siblings have already volunteered to have “slumber parties” with him every night so he doesn’t get lonely.

I’m also not sure what we’ll do about showering/bathing. All of our tubs and showers are upstairs. (We have a half-bath downstairs.) I might just do sponge baths for the duration of treatment and hope that he doesn’t get too stinky.

On the bright side, we’ll be able to apply for a temporary disability placard for our car, which means we’ll get premium parking whenever we take him anywhere. And I won’t have to worry about his tendency to elope for a few months (unless he gets really proficient with the wheelchair… then I might have bigger problems). And we’ll definitely meet our insurance deductible this year!

So, yes, September-December, at the very least, are going to be interesting months in the Wahlund household. I’m thankful I don’t have a new job yet, because having to navigate PTO and FMLA and so forth would be an extra layer of stress. As it is, Collin had to cancel plans to go on a business trip that was supposed to occur the same week as Peter’s surgery (thankfully, his bosses were very understanding about it), and he has enough PTO to take the week of Peter’s surgery off.

If you’ve read this far and are now thinking, “Wow, that sounds like it’ll be tough, how can I help?” then God bless you. I’m going to be completely honest and vulnerable here and say that I very much appreciate all the help we can get.

First off, please pray for us. St. Alphonsa is the patron saint of kids with clubfoot so she’s a good one to ask for intercession. St. Raphael is good too (patron saint of bodily ills as well as nurses, physicians and medical workers), and St. Luke (patron saint of doctors). I plan to ask our priest to give Peter a special blessing prior to his surgery.

Second, if you have any experience or advice or hacks or resources for kids in casts and/or wheelchairs, lay them on me. Comment on this post, or Facebook, or Twitter, or e-mail me. Bonus points if they are hacks for kids with autism who are in casts/wheelchairs.

Third, Peter has an Amazon wish list here. I’ve added some items we’ll likely need during/after casting and surgery, as well as toys, games, and activities he’d enjoy. Ideally, I’d like to have a new toy or book to present him with at every casting appointment, in hopes that the novelty will distract him, and I’d like to have some surprises for him immediately after surgery as well.

However, what with increased medical costs coming up (every appointment is likely going to be approximately $200 out of pocket until we meet our deductible, and the surgery itself will cost a few thousand out of pocket), I have to limit our spending to necessities and can’t afford many extras.

So if anyone wants to send a spunky little boy who’s got a lot to deal with some extra love in the form of a gift from his wish list (or any gift at all — email me for our mailing address), this mama would be very grateful. Regardless, prayers and good wishes are always needed and appreciated. 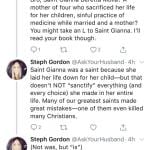 August 18, 2019
Was St. Gianna's Life as a Working Mother Unrelated to Her Canonization?
Next Post 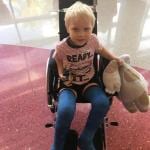 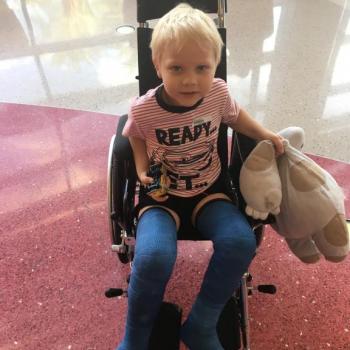