… Do you ever feel like Catholics are the ones fighting the majority of the battles lately? Maybe it’s because we like to fight about everything, being members of the Church Militant and all. Or maybe it just seems that way because blogging affords me the luxury of surrounding myself with passionate Catholics of the more orthodox ilk. Oh, I know… it’s probably because politicians have no qualms picking fights and hurling insults at Catholics. Yeah, it’s probably that last one.

So there I was minding everyone’s business, making sure enough people knew about the petition to request the HHS Department’s mandate requiring Catholic employers to provide contraception and abortifacients to their employees be rescinded when someone asked me …

“Why the hell should Catholics care about this when sixty MILLION Catholics use birth control?”

Why the hell indeed. My first reaction was, wow, sixty million. Prove it. And he did. So I thought on this and thought on this some more. If the majority of Catholics have no issues with contraception and abortifacients how can we make them care about this mandate enough to sign a petition?

There aren’t enough hours in the day to write about how pathetic it is that so many Catholics are ignorant of Humanae Vitae and where our Church went so drastically wrong. Equally, I can’t change the minds of sixty million Catholics in a matter of weeks even I talked till I was blue in the face and passed out on the floor. I’m just not that influential or eloquent.

This past weekend my parish priest gave a fantastic homily on the mandate and told his flock “quit cooperating with the culture of death“. He was so impassioned and forceful it made us all squirm – the good kind of squirm that indicates a pricking of the conscience. I had never heard the Profession of Faith recited so weakly after a homily. Awkward.

Again, why should we care? Because contraception and health care insurance is just one part of the issue, the other has to do with the deliberate stripping of Catholic’s civil liberties. This mandate is directed specifically at Catholics and is seeped with religious intolerance. We are simply asking that we be respected enough to live our faith without moral compromise and government intervention. I believe the term is “religious freedom” and “free exercise” which can be found somewhere in here. 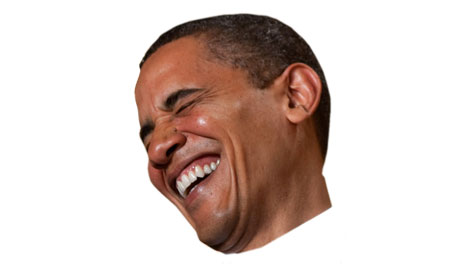 Really this is only the beginning. Who or what is next on their agenda? And finally, just because sixty million Catholics choose to do something wrong doesn’t negate our obligation to do something right, to quote a very wise woman. So to that, I invite the Big B.O. and his cronies to engage in the physical act of love with themselves.

HHS move on contraception mandate amounts to ‘to hell with you’; bishops’ protests mount

Bishop Peter J. Jugis: We must stand up and protect religious freedom

Will the ACLU protect Catholic’s civil liberties; not a chance in hell. Read their love letter to B.O.

And for your reading pleasure, some quotes dripping with bad-assery…

“Not only can women get contraception elsewhere, but there exists utterly no “right to contraception.” And why would there be? I know our world is idiotic and sexist to the point of the embarrassing belief that women cannot prevent pregnancy without pills, but as it turns out, they can. In fact, if you’re a woman reading this, chances are you’re preventing pregnancy right now. (If not, rethink your sex life.) Thus a health-care provider not providing free access to artificial contraception does not damn women to pregnancy — oh, the horror — any more than not providing diet-pills would damn them to obesity.” – Marc Barnes

‎”The Amish do not carry health insurance. The government respects their principles. Christian Scientists want to heal by prayer alone, and the new health-care reform law respects that. Quakers and others object to killing even in wartime, and the government respects that principle for conscientious objectors. By its decision, the Obama administration has failed to show the same respect for the consciences of Catholics and others who object to treating pregnancy as a disease.”
– Archbishop Dolan of NYC

January 31, 2012 In case you missed the happy news...
Recent Comments
26 Comments | Leave a Comment
Browse Our Archives
Related posts from The Crescat