Atheists.org, be honest. It’s just Christians you have issue with, not religion in general…

… I’m not one to typically get all bent out of shape over the phrase “happy holidays” instead of “Merry Christmas”. I also don’t take it as a personal slight to hear the former over the latter. I have high blood pressure and I’m not about to let that one little thing kill me. How ever I’ll take the risk for this… 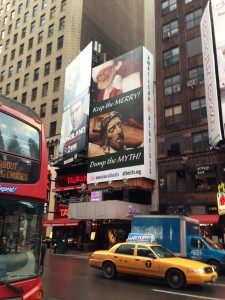 I think the word they’re looking for is “anti-theist”, not atheist.

David Silverman, President of American Atheists stated, “We know that a large population of ‘Christians’ are actually atheists who feel trapped in their family’s religion. If you know god is a myth, you do not have to lie and call yourself ‘Christian’ in order to have a festive holiday season. You can be merry without the myth, and indeed, you should.”

Mr. Silverman continued, “We encourage people to be honest with themselves and their families this year. If you don’t believe in god, tell your family—honesty is the greatest gift, and they deserve it.”

Teresa MacBain, Communications Director and a former pastor stated, “The true beauty of the season—family, friends, and love—have nothing to do with the gods of yesteryear. Indeed, the season is far more enjoyable without the religious baggage of guilt and judgmentalism. Dump the myth and have a happy holiday season.”

Truly, this is a sniveling cowardice “campaign” they’ve got going and it’s hidden behind false concern for poor suffering closet atheists living in fear of retribution from their Christian families. I think they’re confused. They have Christianity mistaken for something else.

Where is their sense of concern for large populations of Muslims “who feel trapped”? Namely, women beaten for not wearing burqas and young girls being given away as child brides to fifty year old men. Where’s the “Mohamed was a pedophile” billboard encouraging Muslims to come out the closet to their families during Ramadan? Allah is a “MYTH”? My, oh my. Can you imagine. But that would require an ounce of testicular fortitude on their part and an admission that they aren’t in fact targeting Christians for discrimination during the second holiest time of the year. Someone alert the ACLU! [I just made myself laugh.]

And if you want to get down to technicalities, your billboard is false. For an organization lauding itself on “truth” this anti-Christian campaign of yours is loaded with hilarious inaccuracies. The word “myth” should actually be under the Thomas Nast version of Santa Claus. He would be the one responsible for creating the modern image of Santa you stuck up there in Times Square. Thomas Nast, you know him right? The notorious anti-Catholic responsible for cartoons like this… 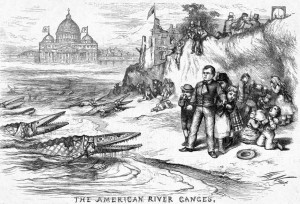 No, he certainly wouldn’t have any ulterior motive to altar the Catholic traditions associated with the very real St. Nicholas, Bishop of Myra.

If you wanted to run an accurate advertisement for your organization there, might I suggest you flip things around. Santa is the myth, and Christ is the source of merriment.

And finally, a party without all the “religious baggage of guilt and judgmentalism” is commonly referred to by most normal thinking people as a typical Saturday night. Get your own damn holiday. Just make something up. I hear your pretty good at that.

PS- what’s an atheist post without a little Steve Martin. Courtesy of Dwij.

December 13, 2012 Jennnifer Fulwiler's Minor Revisions...
Recent Comments
0 | Leave a Comment
"Pithy and so, so, true. If it were possible, I'd post a million of these ..."
Vicky Hernandez #whyIstayed Why Women Stay In Domestically ..."
"All the best to you, Katrina! We'll miss you. Thanks for sharing your journey with ..."
Lori Ten Years is a Long Run…
"Bon voyage on your new endeavours. And thank you."
Cordelia Ten Years is a Long Run…
"I will miss your unique, funny, honest voice. Thank you for all the years of ..."
Jim Vogel Ten Years is a Long Run…
Browse Our Archives
Related posts from The Crescat 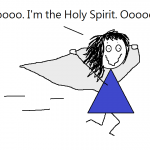