Setting Aside Our Differences to Fight Abortion, Can It Be Done …

Setting Aside Our Differences to Fight Abortion, Can It Be Done … January 26, 2013 Katrina Fernandez

… Abortion is evil. It is the evil that’s the root of modern society’s problems. As long as abortion exists human life with be valued by arbitrary measures like convenience and quality. Life will be conditional; conditional on if you are physically or mentally competent, a nuisance to family members, or if someone wants you or not. This devaluing of human life leaves no room for treating all people with equal dignity.

It is because of my strong feelings towards the evil of abortion and the harm it’s done that I want to see it end. I want to see an end to abortion above all else. In my very adamant and vocal opinion, ending abortion is the most important thing ever. That’s why pro-life groups who place their religious differences in front of ending abortion are groups that do more harm than good.

Imagine a scenario where you must either (a) oppose a person or organization that supports a cause you deeply and fully support or (b) disregard insult and injury toward your religious faith for the sake of the cause you support.

He does pose an interesting scenario that’s not hard to imagine at all, especially in light of the anti-Catholic agenda of a group of pro-life activists called Abolish Human Abortion. Some have criticized my tone in this post as too harsh; however, I view the tone I used as completely apropos for the insults hurled at my beliefs. You can’t call someone’s mother a whore and than complain when you get your ass handed back to you on a platter. It’s basic playground rules that even school kids understand and accept.

So Sam poses his scenario. To which I reply, it wholly depends on whether or not there exists an understanding between both parties to lay those differences aside to seek a common goal. Which brings me back to Abolish Human Abortion. They’ve made it abundantly clear they do not consider Catholics real Christians and therefore do not want to ally with us on this matter. They mock our practices, like marches and praying the rosary, and jumped on any chance to stomp on our character. The hubris involved in arguing religious purity over the importance of saving babies detracts from the mission at hand. So in this instance, I answer Sam with a “No, I cannot place these differences aside”. Largely because AHA refuses to.

Yes, it is a shame. They are a popular group with a large following, but they aren’t the only group around. To me it’s not worth the aggravation to be associated with them or support their group. Not when there are so many other pro-life groups who are big enough to lay personal & religious differences aside for the issue at hand. And yes, they have neat graphics and that drop card idea of theirs is pretty sweet. But look what you can do in this modern age of technology… 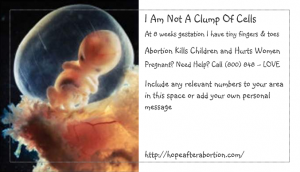 I made this at Vista Print in under two minutes. Of course it looks like it took me two minutes to slap together but you get the idea. You can tailor your own cards to include the local numbers of area pregnancy support centers or your own parish’s pro-life ministry, all without promoting a group that spreads anti-Catholic bigotry.

Related Link: The Untold Story of the Ecumenism of the Trenches

January 19, 2013
How The Nine Days Of Prayers Comforted Me While I Fought Demons...
Next Post

January 26, 2013 March For Life 2013...
Recent Comments
0 | Leave a Comment
Browse Our Archives
get the latest from
Catholic
Sign up for our newsletter
POPULAR AT PATHEOS Catholic
1

What If Someone You Love is...
Public Catholic
Related posts from The Crescat