Things you aren’t supposed to do – ask questions about Islam…

Things you aren’t supposed to do – ask questions about Islam… August 16, 2014 Katrina Fernandez

… Something totally expected happened when I decided to ask fellow Patheos bloggers at the Muslim channel their thoughts of the atrocities being committed in the name of their religion.

But not from who you’d think.

Turns out most of the bloggers on the Muslim channel just don’t write as prolifically as we do here in the Catholic channel. They have entire weeks between posts. We have hours; a single day at most.

So the chances of anyone over there even seeing what Sam Rocha and I wrote are pretty slim. Fair enough. Not necessarily an excuse for remaining silent, but understandable since it appears to be a considerably less active channel of Patheos. So I decided to let it go.

What I can’t let go is the backlash I received from non-Muslims for even daring to ask. Cries of H8 and Islamaphobia filled my facebook page and inbox. Sadly, the majority of my critics were other Catholics.

Nothing can develop in the way of dialogue if we continue to act like Islam is above scrutiny. If we are afraid to even ask questions of Muslims then how in the world will we ever find our courage to stand up to them, when the day comes here in the US. And it’s coming.

I find this very troubling, the way we’ve decided as a collective whole, to not be able to ask even the most basic questions. Is the most dangerous Muslim an offended Muslim? 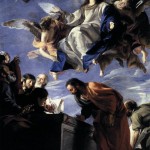 August 16, 2014 Mark Steyn on the "narrative" of Ferguson...
Recent Comments
0 | Leave a Comment
Browse Our Archives
get the latest from
Catholic
Sign up for our newsletter
POPULAR AT PATHEOS Catholic
1