AFTER speakers, including Donald Trump, stood on a stage that resembled a Nordic rune adopted by the Nazis and used later by white supremacists, social media users went wild at the weekend, demanding to know whether the design was deliberately created to represent the Republicans as fascists.

According to the Huff Post, the Conservative Political Action Conference (CPAC) stage in Florida bore:

A striking resemblance to the ancient Norse Odal Rune adopted by the SS unit.

And the Anti-Defamation League noted that after World War II the Odal (or Othala) Rune became commonly used by white supremacists in Europe and North America.

In response to some 100,000 tweets about the issue “and climbing,” CPAC organizer Matt Schlapp angrily blasted the “stage design conspiracies” as “outrageous and slanderous.” He touted CPAC’s 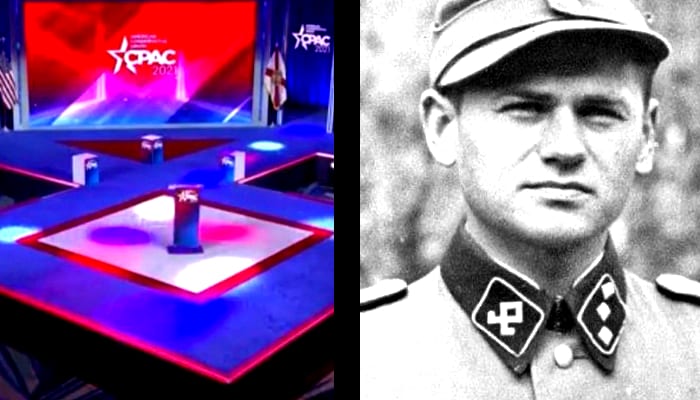 The images above was shared numerous times on Twitter and other platforms to show how closely the stage resembled the rune.

Jewish news site, Forward, reported that the company that hired to set up the stage in Orlando has taken full responsibility for the design.

In an exclusive statement to the Forward on Tuesday evening, Design Foundry, a stage design firm based in Hyattsville, Maryland, said it:

Had no idea that the design resembled any symbol, nor was there any intention to create something that did.

At the conclusion of the event, Hyatt Hotels released a statement saying that it had addressed the concerns with the conference organisers and denounced the use of such symbols as “abhorrent.”

Ian Walters, Director of Communications fo ACU and  CPAC, told the Forward that the design firm:

Provided several options for us to choose from and what we ended up with was the most workable of the options they submitted.

ACU and CPAC have no interest in promoting antisemitism from our stage, whether it’s what happens on the stage or the design of the stage itself. It’s clear that the company we retained designed a stage that has become an unwelcome distraction. As a result, we will not be using that company’s services going forward at future events.

Design Foundry said it was:

Saddened and horrified at the accusations that this was a deliberate act. Design Foundry denounces all hate speech and acts of racism, prejudice, or bigotry in all forms.

By accident or design, the stage’s shape certainly fit in well with some of the unsavoury messages that came out of the main and subsidiary events such as the America First Political Action Conference event that drew CPAC patrons to a nearby hotel where organiser, far-right political commentator Nick Fuentes, above, delivered a speech filled with white grievance and far-right anti-immigration rhetoric.

If [America] loses its white demographic core … then this is not America anymore.

The dopey, hate-fueled Fuentes went on to praise the Capitol attack, boasting about it leading to a delay in the certification of the election results. He was applauded when he said:

While I was there in D.C., outside of the building, and I saw hundreds of thousands of patriots surrounding the U.S. Capitol building and I saw the police retreating … I said to myself: ‘This is awesome.’

March 4, 2021 Fewer gays are cowering in closets; worried Christians want answers
Recent Comments
0 | Leave a Comment
Browse Our Archives
get the latest from
The Freethinker
Sign up for our newsletter
POPULAR AT PATHEOS Nonreligious
1