THE head of the Catholic League, Bill Donohue, above, has seized on a new religious freedom report to warn that Christians in the West need to fear rapidly encroaching secularism.

In a piece penned for the Eurasia Review, he said:

They are the ones advocating, or imposing, a secular agenda on religious institutions.

For religious liberty to thrive, it must be afforded a wide scope and not be suffocated by restrictive norms and laws. It is not only offensive, it is downright insulting, to tell the faithful that they can pray in their house of worship. Faith that cannot be exercised in the public square is faith denied.

To be sure, no right is absolute, but efforts to narrowly define religion’s reach are stifling.

There would be no liberty, anywhere in the world, had it not been for the Western vision of individual rights and justice before the law. These ideas did not spring from Africa, the Middle East or Asia.

It is the West that gave birth to liberty and equality, and it is our Judeo-Christian ethos that shaped it. That is why the movement to secularize our religious institutions makes no sense historically, logically, or morally.

He pointed out that the 2021 report on Religious Freedom in the World, issued by Aid to the Church in Need, details two genres of religious persecution. The first is the most familiar one: violence against people and property (houses of worship).

The second is a more subtle way of persecuting the faithful, typically relying on restrictive measures encoded in public policy and law.

Pope Francis calls it ‘polite persecution.’ He is alarmed by the spike in ‘new rights,’ cultural norms or laws that relegate religion ‘to the quiet obscurity of the individual’s conscience, or that narrowly confine them to ‘the enclosed precincts of churches, synagogues or mosques.’

The report found that the most persecuted religion in the world is Christianity. As in years past, Muslim-run nations and Communist states continue to be the worst offenders. The evidence shows that Africa, Asia and the Middle East remain hotbeds of Christian persecution in its most violent form.

The report cites by way of example violations of the conscience rights of those in the medical profession. Forcing doctors to end life (euthanasia), or to stop it from developing (abortion), is a growing threat to people of faith in many nations.

Laws aimed at curtailing the rights of religious schools are also a problem. Graduates of some religious colleges and universities are being discriminated against in employment. Parents who object to classroom instruction that explicitly runs roughshod over their religious beliefs (e.g., sex education) are being summarily ignored by administrators. ‘Hate crime’ legislation is being used to criminalize the beliefs of those who hold to traditional moral values.

Another variant of ‘polite persecution’ are attempts to limit the scope of religious liberty, or that undervalue its role in a free and democratic society.

‘Polite persecution’ of religion may not put us in imminent danger, but in the long run it can accomplish the same end. Campaigns to subvert it are in everyone’s interest.

When a report was published last year by Humanists International detailing the persecution of non-believers across the world, Donohue responded thus:

The report said that non-religious people in Colombia, India, Indonesia, Malaysia, Nigeria, Pakistan, Philippines and Sri Lanka are often ostracised, and some women are forced into marriages.

Evidence is growing that humanist and atheist activists are being targeted on the basis of their rejection of a majority religion or their promotion of human rights, democratic values and critical thinking.

A range of tactics is used against humanists, atheists and non-religious people, said the report, which was funded by the UK Foreign and Commonwealth Office. They include the criminalisation of blasphemy and apostasy, impunity for attacks, social isolation and discrimination. 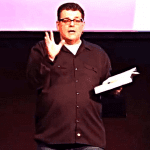 April 23, 2021 Paunchy pastor regrets castigating women who 'let themselves go'
Recent Comments
0 | Leave a Comment
Browse Our Archives
get the latest from
The Freethinker
Sign up for our newsletter
POPULAR AT PATHEOS Nonreligious
1