Islamic leader demands release of ‘holy’ tiles seized in the US

TILES bearing “holy” koranic verses – intended to used as part of the construction of a new mosque in Virginia – were recently seized by a Customs and Border Protection officer because they were made in Iran, a country from which imports have been banned since 1979.

This has infuriated Imam Abolfazl Nahidian, above, of the Manassas Mosque in North Virginia, who – according to Religion News Service – is now calling on the Biden administration to release the magic tiles.

A letter from Customs and Border Protection informed the mosque that the tiles – which arrived at Dulles International Airport  – must be shipped back to Iran or destroyed.

Iran-born Nahidian, who supported Ayatollah Khomeini’s seizure of power in Iran, and believes the 9/11 attacks were a conspiracy led by Israel, said:

Destroying the tiles is the same as destroying verses of the Quran, or the whole Quran itself.

Nihad Awad, above, Executive director of the Council on American-Islamic Relations (CAIR), added that whatever one’s views are of the Iranian sanctions, it makes no sense to enforce the rules on benign pieces of religious art.

They are not weapons of mass destruction. We believe the government should have common sense.

At a news conference at the Manassas Mosque earlier this week, Nahidian said the custom-made tiles were shipped in June from the Iranian city of Qom, to be used in construction of a new mosque a few miles away.

He said the tiles were a gift and he paid no money for them, but a Customs and Border Protection officer at the airport blocked the mosque from claiming the tiles, citing the sanctions.

Nahidian said he has received other tile shipments throughout the years without incident, including one shipment that arrived eight months ago.

A spokesperson for Customs and Border Protection confirmed that the tiles were placed on hold on June 21 and that on June 30, the Treasury Department’s Office of Foreign Asset Control determined that, under the sanctions imposed on Iran, the tiles could not be imported.

The spokesperson said no final determination has been made on the tiles’ disposition.

Speakers at the news conference suggested that “anti-Islam sentiment”  may be responsible for the confiscation.

If this were a statue of the Virgin Mary, would we be here discussing this?

Nahidian has led the Manassas mosque for nearly three decades, and has occasionally drawn scrutiny from critics who say he is anti-Israel and was a supporter of the ayatollahs in the Iranian Revolution.

In 1979, he and others chained themselves to the railings of the Statue of Liberty after climbing to the top and unfurling banners criticising the shah of Iran, who was overthrown.

Nahidian said his history of radicalism is irrelevant to whether the tiles should be imported.

May I suggest to Nahidian that he could avoid similar run-ins with US Customs and Border Protection by getting his religious crap from a country that freely supplies billions of dollars of goods to America – China, home to the Fuzhou Sanrui Building Materials company. 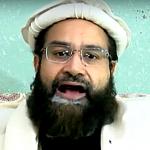