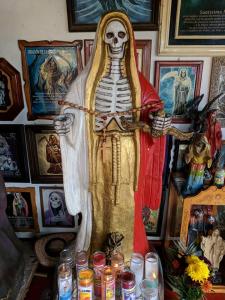 What prompted your interest in the Santa Muerte phenomena?*

I am a specialist in the religious landscape of Latin America and was conducting research for a book project on the Virgin of Guadalupe when in March 2009 I saw the news that the Mexican army had demolished 40 Santa Muerte altars on the border with Texas and California. I have more than 3 decades of experience in Mexico so I was already familiar with the Mexican folk saint of death but had no idea that she had become religious enemy number one for the then Calderon administration. I saw that very little had been published on Santa Muerte, particularly in English, so I decided to put the Guadalupe book project on hold and write the first book in English on “Saint Death,” which I did. Devoted to Death: Santa Muerte, the Skeleton Saint was first published in 2012 and the second edition in 2017.

You note that it is the fastest growing religious movement in the West – why do you think it is so appealing to so many?

With an estimated 12 million devotees, the majority in Mexico but also large numbers in the US and Central America, Santa Muerte has become the fastest growing new religious movement in the West for several reasons. Most importantly she has the reputation for being speedy and efficacious in performing miracles, the great majority of which are related to health, wealth, and love. Over the years I don’t know how many times I’ve heard devotees tell me they had been asking a Catholic saint for a miracle, often Saint Jude in Mexico, but their petition was ignored. In that context a friend or relative recommends they try Santa Muerte and within a week or so the saint of death grants the miracle in question, such as a better job or healing of a sick family member.

A second important reason is her reputation for being nonjudgmental, the saint who never discriminates. Thus for those who have suffered discrimination, such as LGBTQ folks, a supernatural figure who accepts them as they are is most appealing. Another signficant factor in her meteoric growth is the paroxysm of violence in Mexico since 2006 which has resulted in more violent death, more than 200,000 victims, than any other country except Syria. In the context of the bloody Drug War many turn to Santa Muerte for a few more weeks, months or years in the iconic hourglass that she holds. The idea is who better to turn to for more life than Death herself? On the flipside, other devotees, particularly narcos, ask her to visit death upon their enemies, rival cartel members and law enforcement. Here I must point out that Santa Muerte also has a robust following among Mexican law enforcement, especially municipal police who are on the front lines of the interminable Drug War.

I don’t see that happening in the near future. The rise of Santa Muerte must be seen in the context of the growth of religious pluralism in Mexico and Latin America in which one’s religious identity is no longer necessarily inherited but actively chosen among scores of alternatives which include New Age groups, Pentecostalism, African Diasporic faiths or increasingly no religious affiliation at all, which is a major trend across the Americas.

The Catholic Church has condemned Santa Muerte, but the Church’s pronouncements seem to have little effect – why do you think this is the case? And are there clergy or vowed religious who you’ve found secretly embrace Santa Muerte?

The Church’s condemnations have not put the brakes on rapid growth primarily because most devotees, especially in Mexico, are nominal Catholics who have only infrequent contact with the institutional Church, so many don’t care or know about the Church’s rejection. There’s also the issue that several Catholic saints, as my research partner Dr. Kate Kingsbury and I have documented, also serve as narco-saints for Mexican drug traffickers, such as the Holy Child of Atocha for El Chapo Guzman’s son, Ovidio Guzman.  No, I have not come across Catholic clergy who venerate her, though I’ve heard unconfirmed rumors.

What do you think is the most misunderstood aspect of the Santa Muerte phenomena?

The most misunderstood aspect of Santa Muerte devotion is that the majority of devotees are narcos and that she’s nothing but a narco-saint. Most of her devotees are working class folk trying to make ends meet and believe that the Skeleton Saint helps them do that. It is true that she has a significant following among narcos but several Catholic saints do as well.

What do you think the Catholic Church can learn from all this, if anything? The Church has a complex history of both incorporating pre-Christian practices into its own as well as crushing them – why do you think this particular practice has drawn such strong condemnation?

Santa Muerte devotion has drawn such rapid and frequent condemnation because of both religious competition and theological reasons. The Church in Mexico and across Latin America was already in a state of panic over stiff Pentecostal competition and now has to contend with what it views as a heretical folk saint. The  theological argument is that veneration of death is anathema to the promise of eternal life made possible by the ultimate sacrifice of Christ on the cross. Moreover only human beings can be saints which means it’s heretical to consider death a saint.

Here, however, I must point out that the other translation of Santa Muerte is Holy Death, which derives from the Good Death of Christ. I believe the Church would do better to explain why it views Santa Muerte devotion at odds with Catholic beliefs rather than issuing acerbic denunciations that only serve to alienate, and as we see have had no effect in slowing growth of the fastest growing new religious movement in the West.

How much of this phenomena is rooted in Indigenous people wanting to reclaim their spiritual roots from Western Christianity, which suppressed many “pagan” practices?

Yes, that’s part of it as Dr. Kingsbury is documenting in research for her book on Zapotec female devotees in Oaxaca.  However veneration of Santa Muerte is even more prevalent among Mestizo Mexicans who constitute approximately three-quarters of the Mexican population. Many devotees in Mexico view Santa Muerte as the reincarnation of the Aztec death goddess, Mictecacihuatl who presided over the Aztec month of the dead before the Spanish conquest and colonization in which the Church imposed All Saints and All Souls Days, the current Days of the Dead in Mexico. Some of these devotees reject Catholicism as a faith imposed by the Spanish colonists and thus try to detach Santa Muerte devotion from its roots in folk Catholicism.

Is the Church and the Mexican government making a mistake trying to suppress this devotion?

Since 2012 the Mexican state has been more tolerant of devotion. However since 2005 all Santa Muerte temples and associations that have applied for legal recognition have been rejected. Continued suppression of the fastest growing new religious movement in Mexico by Church and State will not put a damper on growth and will only increase its appeal among the criminal element. Because there is greater freedom of worship in the US there is more institutional space here for expansion.

*The journalist who interviewed me several months ago didn’t publish my interview. 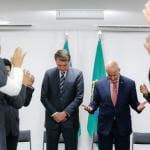 November 26, 2019
Why Have Evangelical Churches Gained So Much Political Influence in Latin America? Expert Points to 5 Factors in BBC Interview
Next Post 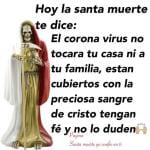 March 24, 2020 Life and Death in the Time of Coronavirus: Santa Muerte, the 'Holy Healer'
Recent Comments
0 | Leave a Comment
Browse Our Archives
get the latest from
The Global Catholic Review
Sign up for our newsletter
POPULAR AT PATHEOS Catholic
1

Fetal Cell Lines Are Not Continual...
Through Catholic Lenses
Related posts from The Global Catholic Review