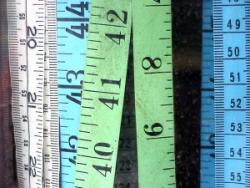 I’ve been known to straighten a picture or two when my host isn’t looking. My office is a wreck, but when it comes to doing something the way it’s supposed to be done, I have a strong inclination toward excellence.

An office doesn’t have to be straight, but pictures do, right?

I’m like this with editing, writing, painting (walls, that is) and manicuring my lawn. When I’m on hands and knees extracting a strawberry weed, my 82-year-old neighbor says, “Sam, you worry too much.” My spiritual director echoes, “It’s okay to let go a little.” My supervisor affirms, “Don’t pull an all-nighter trying to make better what is already great.”

As much as I’d like to hear their counsel, I can’t help but ask, Don’t they care?

The thing is, I know they do, so the problem must be with me. But am I really obsessed with details, or is this merely a healthy avoidance of mediocrity? Merriam-Webster includes this example of this usually distasteful word: “The dinner was delicious, but the desert was mediocre.” Could you imagine asking, “Waiter, might I have a piece of your Key Lime pie? I’ve heard it is simply mediocre and I can’t wait to try it!”

Hardly. So what’s going on?

Heather Holleman from Live with Flair got me thinking about mediocrity in a slightly new way. She’s a college writing teacher and she shared this recent classroom interaction:

“Sometimes I go around the room and ask students to introduce themselves by telling me what they were known for in high school…. A few days ago, one incredibly bright student said:

Here’s the part that got me:

My first thought was that this kid must be apathetic, lazy, or both. But Heather goes on:

“He wants to excel, but he knows his limits. He rests in what he can do well, even if it won’t win a Nobel Prize or put him as quarterback on the team. He’s thinking of who he can serve in his career, what he can contribute, and what he can change–even if he’s not the star of the show. His identity has nothing to do with rising to the top….

He’s working at top capacity despite the odds.”

I’m not sure how much of my inclination toward excellence is a personality trait, an important principle of my Christian faith, or the result of a father who corrected nearly everything I did as a child. But I do know this: The fact that these probable sources collectively contain good and bad elements indicate that there is a level of dysfunction in my approach to excellence. For starters, I don’t know how to say something is good enough when I really know it is but my insides scream, “Not yet!”

Because maybe they’re all trying to adjust a slightly crooked picture.

How often in your daily life do you think, “I wish I could do better”? It’s the feeling you get when you realize you aren’t really trying. Your job, your family, even your hobbies: they are worth working harder. But what does it take to move beyond mediocrity? How do you quit using your education, your upbringing, your circumstances, even your faith, as an excuse to keep you from doing your best? Join us at The High Calling for a series on Moving Beyond Mediocrity where we are discussing giving it our all in our workplaces and our homes, in our communities and our churches, for the common good and for the glory of God. 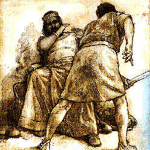 April 2, 2014 [VIDEO] Another Good Job Done by Me
Recent Comments
0 | Leave a Comment
Browse Our Archives
Follow Us!