You Can Create Things to Restore Your Community

You Can Create Things to Restore Your Community October 24, 2014 Marcus Goodyear 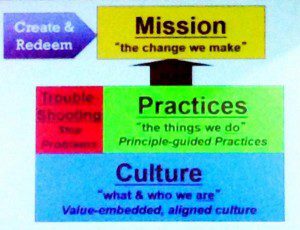 David Gill moved the conversation from devices to decisions, inviting Christians to be proactive in their approach to ethics. Gill has made a career studying ethics, consulting with numerous businesses in addition to his academic work at starting at Berkeley to his recent work at the Mockler Center.

Practicing ethical principles requires discipline, as he explained in his most recent book, Doing Right.

“Ethics of Character or virtue (‘becoming a good person’) is like physical conditioning for athletes. Without adequate physical conditioning, the best-designed football plays will fail to lead to victory…. Without character, principles and rules are impotent. Many of us profess allegiance to moral principles, and yet these principles do not guide our behavior when the going gets tough. We do what we know is wrong, and we fail to do what we know is right. We lack the strength of character to recall, interpret, and apply our own principles when a challenge comes our way.”

Businesses understand the importance of ethics, but they address it from the perspective of damage control. Most ethics case studies begin with major failings—oil spills, whistle blowers, known defects in products. But this is primarily reactive and it doesn’t address the source of these problems.

It is like a man who falls into a river and goes over a waterfall. Most ethics discussions today talk about what to do after he has already gone over the waterfall.

So what can we do to help people avoid going over the waterfall in the first place? Ethics standards can provide warnings, but God must be calling us to something more than just create more rules.

David Gil suggested that we might need to create fences around the dangerous opportunities and ethical challenges that people face in their work. We create disincentives in the workplace that help people live better.

Best of all though, Gil suggests Christians create positive alternatives. Do more than mop up the damage of ethical failures. Do more than create more rules and limiting structures. Create a mission that will draw people and shape their behavior.

Good ethics begin with the right motivation. When people are coming to work for a purpose greater than their own self-advancement and success, then they will be much more likely to be ethical in their work. Leaders must create a strong, compelling, and positive vision, then align the culture of their organizations with the vision. Because the world is broken, we will still need to trouble shoot problems that are going to come up and help people focus on the practical and positive things they can do to serve the greater good.

Katherine Leary Alsdorf asked, “How do you teach the beatitudes or the ten commandments to people who don’t share the Christian faith?”

Gil believes there is a law written on the hearts of people in the community. He doesn’t talk about worshipping the creator and redeemer. Instead, he says, I believe in your people. I believe you can create things that help heal and fix and restore your communities through your work. That kind of talk doesn’t necessarily cite Jesus as our creator and redeemer, but people often ask where they can learn more. And then Gil tells them.

This post is part of a series on Applications of Faith at Work, covering session 3 at the Faith@Work Summit in Boston: 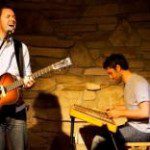 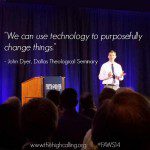 October 24, 2014 What Technology Would You Take with You to Heaven?
Recent Comments
0 | Leave a Comment
"I'm a Human Resources professional, with 40 years in the field. I've been born again, ..."
Jay Sunderland Five Ways to be a Christian ..."
"Well the irony of your article certainly is fascinating. It seems Spurlock created a production ..."
Trevor Working for Free: Interning at the ..."
"If Jesus can't draw all men unto him, surely the alternate Savior, C.S. Lewis, can ..."
Father Thyme Serving God in the Business of ..."
"Great interview and perspective!"
Nancy Anderson French Serving God in the Business of ..."
Browse Our Archives
get the latest from
Best of Patheos
Sign up for our newsletter
POPULAR AT PATHEOS Faith and Work
1

Our model for leadership is a...
Charting Church Leadership
Related posts from The High Calling