“We Need To Get Jesus Ascended!”

Almighty God, we praise you for the exaltation of your Son our Savior Jesus Christ to your right hand. Through his Incarnation, earthly ministry, crucifixion and resurrection he has conquered sin, evil and death and by his glorious ascension he is triumphantly reigning over all of creation. Grant us the ability and desire to follow our Sovereign King, that one day we may be exalted to where he is: living and reigning with you and the Holy Spirit, now and forever. Amen. (Collect by the Rev. Porter C. Taylor) 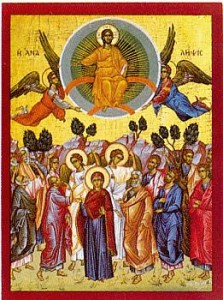 “We need to get Jesus ascended!”

I will never forget the words spoken by my Systematic Theology professor (and now friend) at Fuller Theological Seminary during our class session on the Ascension. The course was “Systematic Theology II: Christology” and up to that point we had covered a robust range of topics: Jesus’ incarnation, earthly ministry, crucifixion and atonement theory, and the resurrection. We had finally arrived at the ascension and Doctor Okholm said, “We need to get Jesus ascended. He can’t stay here, he needs to be at the Father’s right hand reigning over all things.”

Today we commemorate Jesus’ last moments and words on Earth before being exalted to the Father’s right hand. This is known as the Feast of the Ascension. In the midst of our Eastertide celebrations and Pentecost preparations, we pause to share in a Feast Day and rejoice that the Crucified and Risen One is also the Ascended and Exalted One.

The Feast of the Ascension takes place 40 days after the Feast of the Resurrection. According to the Gospels, Jesus appeared to some 500 people after rising from the dead. He ate with his followers, he spoke with them, he revealed himself through the breaking of bread, and he taught them by opening up their minds to the Scriptures. Before his death Jesus told his followers that he would, “go and prepare a place” for his disciples (John 14:3) but that he, “I will not leave you as orphans; I will come to you,” (John 14:18).

It was therefore necessary for Jesus to leave his followers and to ascend to the Father. Practically it meant that the Holy Spirit could and would be sent to minister to, in and through the church.

The ascension is not only the final word on Jesus’ first advent, it is also the last move to ensure the sending of the Holy Spirit. Jesus had promised that another would come, one who would be an advocate, comforter and guide. Ten days after the ascension is the church’s celebration of Pentecost when the Holy Spirit descended upon those gathered in Jerusalem and spread the Good News of Jesus Christ throughout Judea, Samaria and to the ends of the earth.

Many theologians refer to Jesus’ ascension as his exaltation. The theological emphasis or action in the Exaltation belongs to the Father. Jesus does not exalt himself but rather the Father exalts him to His right hand after his voluntary death and resurrection.  Even in the act of ascension Jesus still submits to the Father’s will, for it is only the Father who could vindicate the Lord after the Crucifixion and it was only He who could then exalt his Son after the Resurrection.

In Matthew 28 we read Jesus’ last words and commission to his disciples. We rightly focus on the charge that Jesus gives to teach and baptize as you are going, but we often leave out the words that immediately precede: “When they saw him, they worshiped him; but some doubted. And Jesus came and said to them, ‘All authority in heaven and on earth has been given to me,’” (Matthew 28:17-18). The Father gives authority to the Son and then exalts him as evidence of such gift and power.

The disciples joined their Risen Lord on the hilltop and they worshipped him. Our encounters with the triune God should always result in worship first. If the resurrection is the triumphant vindication of the Crucified One then the Ascension and Exaltation is the exclamation point at the end of the Christological sequence. Jesus is risen and now he is reigning over all things!

Hundreds of millions of Christians celebrate the Ascension on a weekly basis through the proclamation of the Nicene Creed. We believe:

He ascended into heaven

and is seated at the right hand of the Father.

He will come again in glory

to judge the living and the dead

and his kingdom will have no end.

It his from his Ascended and Exalted place that Jesus intercedes on our behalf, that he rules over all creation, and from which he will come again to consummate his kingdom and new creation.

The Ascension means that Jesus is King.

The Ascension means that our Great High Priest intercedes on our behalf.

The Ascension means that the Good Shepherd watches over his flock from the Father’s right hand.

The Ascension means that the one whom we worship is Exalted.

The Ascension means that the Holy Spirit will be sent to his church.

The Ascension means that we are awaiting Christ’s second advent.

Imagine being one of the disciples. You have spent the better part of three years following an itinerant preacher only to watch him be executed by the Roman government. You’ve witnessed him healing, casting out demons, bringing the dead to life, and proclaiming the “year of the Lord’s favor.” You then discover that he is risen from the dead and he comes to break bread with you. After all of that you follow him to the top of a hill where he instructs you and then he ascends to heaven.

The answer for the disciples was actually quite simple and it should be the same for us: they gathered together in prayer, received the Holy Spirit at Pentecost, and began boldly proclaiming the Good News of Jesus to a broken, lost and hurting world. The Lord had just commissioned his followers with the greatest call to evangelism: go and make disciples of all nations! I imagine that the disciples stood together in awestruck silence after Jesus ascended, but I’m guessing they didn’t stay there long…they had a job to do! We also have a job to do!

The Ascension is therefore yet another call to deeper discipleship. In the ascension and exaltation of Jesus Christ we are urged to follow his commands and commission in every area of our lives and with every fiber of our being. We remember this charge weekly through our celebration of the Eucharist when we say, “We remember his death. We proclaim his resurrection. We await his coming in glory!”

We live in that pause between “resurrection” and “awaiting his coming in glory.” Just as Jesus’ ascension occupied the time in between resurrection and Pentecost, so too are we called to proclaim the Lord’s death and resurrection until he comes again by the power of the Holy Spirit.

As much as we want to we cannot keep him here. We need Jesus to ascend in order for him to later descend once again and to come in the glory of his kingdom. He is crucified. He is risen. He is ascended. And he’s coming back again!

May 6, 2015
Proper Preface or Collect for the Seventh Sunday of Easter
Next Post 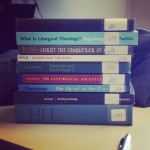 May 15, 2015 Resource Round-Up for Weekend Reading
Recent Comments
0 | Leave a Comment
Browse Our Archives
get the latest from
Evangelical
Sign up for our newsletter
POPULAR AT PATHEOS Evangelical
1

How Should Churches Respond to Cultural...
Cranach
Related posts from The Liturgical Theologian 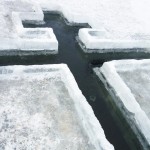 Evangelical
Sent Out in Love - Pentecost 7 Sermon
The Liturgical Theologian 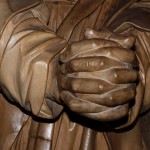 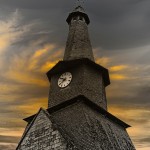 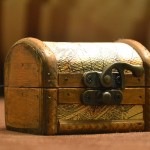