The Spirit of Albion: a new pagan film! 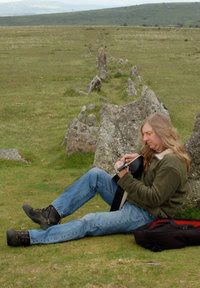 A number of years ago, I met a pagan musician named Damh Smith (also known as Damh the Bard) at a summer solstice ritual at the Rollright Stones in Oxfordshire, England. That’s when I first heard the song “The Spirit of Albion” from his third CD of the same name. We struck up an occasional email correspondence, and when I learned he would be playing in Glastonbury while I was going to be there, he offered to put me on the guest list. little did I know this event was nothing less than the annual OBOD Eisteddfodd! It was grand, food and drink everywhere and some of the best bardic performances, both singing and spoken word, I’ve seen by pagans anywhere. Damh’s music is well-loved among UK pagans and finding an audience in the U.S. Plus, Damh is just a cool guy.

Damh is now involved in making a pagan-themed film called THE SPIRIT OF ALBION with producer-director Gary Andrews. Gary graciously agreed to an email interview about the project.

TWH: How did the idea for making THE SPIRIT OF ALBION come about? Is it mainly based on Damh’s song of the same name? 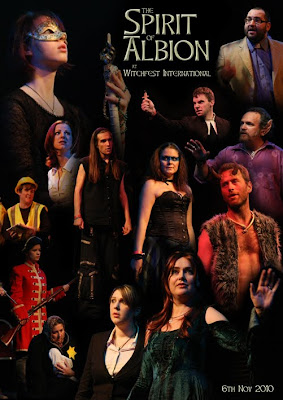 GA: The film began life as a devised theatre piece for a Youth Theatre Workshop that I run. Every summer we put on a show and in Sept 2009 we decided we would like to do a ‘musical’ for performance in July 2010. I have been a long time fan (and friend) of Damh and have always found his work to be very inspiring so I played some of his stuff to the group and they instantly fell in love with it. We decided to choose 10 tracks (5 for each act) that when we put them in a certain order told a story. From these we developed characters and improvised scenes and slowly put together the final script. It was performed for three nights in a tiny studio theatre and went down very well, especially with the members of the pagan community who came to see it. It was their suggestion that I should take the show further that got me thinking about adapting it into a film. We also did another ‘live’ performance of the show in November, this time at Witchfest International, at the Fairfield Halls, Croydon to an audience of around 200. Again – it met with a very positive response.

The song ‘The Spirit of Albion’ itself is used as the finale in the play – a summing up of the joy and energy of the story and as such seemed a fitting title for the show itself.

TWH: What kind of challenges are you facing making this independent film?

GA: I guess the usual challenges faced by all independent film-makers, the main one being how to get the best results of a very low budget! I am very lucky in that I have many friends who are actors and artists of all sorts, as well as many student friends studying media and so on – so casting and crewing has been fairly straightforward. We have given the film a fairly lengthy pre-production period in order to make sure that all the details are well in place so that once filming begins, things can go as smoothly as possible. Another challenge will be dealing with the British weather through the summer (we start shooting on 30th April and wrap on 11th Sept, with 20 shooting days dotted about in there) as much of the film happens outside. We shall just have to hope that the Gods are smiling on us!!

THW: Do you think your work might inspire more pagan filmmakers?

GA: I hope so. It would be lovely to think that people would be inspired to go out and be creative themselves having seen our film. And not just film-makers – playwrights, singer songwriters, painters too. We (Damh and I) have chatted about how there really aren’t that many films out there that show the modern pagan lifestyle in a true or positive light, so the sense of responsibility on our shoulders whilst making this film is ever present!

TWH: What makes the story told in this film relevant to contemporary pagans?

GA: Well, the 3 main characters are young, modern people with the kind of problems that are very real today. One, Esther, is working in a high powered, pressured job with no real life outside of work and has reached breaking point. The second, Annie, is a damaged young woman who works in a job she hates (animal testing) and has taken refuge in drugs and casual sex rather than face her reality. Finally we have George, an anti war activist who is fighting the guilt that his soldier brother was killed in Afghanistan and the last time they spoke they had a fight about their life choices. All 3 of them, on the same day (Oct 31st) have a meeting with a stranger who turns out not to be what they first appear. Added into the mix is Annie’s brother, a Christian priest who is having doubts about his vocation. All of these characters are given a chance to see things a different way, through the filter of the Pagan perspective and all of them have a life-changing experience, although not everything turns out as you might expect!

Our aim was, first and foremost, to tell a good story – if at the same time the ‘message’ gets across too, then that is a bonus.

TWH: What are your plans for exhibiting and distributing the film?

GA: Well, first and foremost it will be a DVD release (both PAL and NTSC) and will be available to buy online via the official website. DVD will be the best way to experience the film as there will be plenty of extras on the disc (commentaries, behind the scenes and more). I am also starting to turn my thoughts to film festivals and so on. Perhaps later on we will also look at other online outlets (itunes, DVD baby etc) but right now I am mostly focused on making the film to the best of my abilities!

Stay tuned for more updates on this exciting project. And be sure to check out THE SPIRIT OF ALBION website for great photos of the locations and actors, and more information on the production.

March 3, 2011 The History of Pagans in the Media: A Cautionary Tale
Recent Comments
1 Comment | Leave a Comment
Browse Our Archives
get the latest from
Pagan
Sign up for our newsletter
POPULAR AT PATHEOS Pagan
1

Hoodoo How We Do: Underwear Spells
Voodoo Universe
Related posts from The Witching Hour