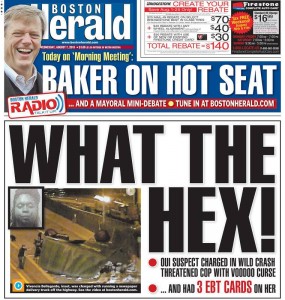 Leave it to the Boston Herald…well, actually, it is a Boston Magazine piece that explains the characterization of a drunk driver by the Boston tabloid known for its sensationalist headlines.

A drunk driver who drove a Boston Globe delivery truck off a highway (How many Boston newspapers can this story involve? Stay tuned!) was described as having raged at a state trooper when caught out in a welfare benefits scam. But it’s the “voodoo cursing” that may be of interest to The Media Witch’s readership….

Now, this woman does indeed sound like she has some issues. But threatening people with voodoo curses does not sound like something any self-respecting voodoo priestess would do (not any of my acquaintance, anyway).

Sigh. Media sensationalism? Or just an unfortunate case of an unbalanced person claiming to be of a spiritual tradition she is not really knowledgeable of?

Living the Liminal: Successful Spellcrafting
The most common thing I see occur is friends and acquaintances struggling...
view all Pagan blogs
What Are Your Thoughts?leave a comment
Copyright 2008-2020, Patheos. All rights reserved.