A Cinema of Evil: Hollywood’s Love Affair with Witchcraft & the Occult

There can be no denying that contemporary culture is fascinated by horror. This popular genre of literature, film and TV has many sub-categories: supernatural, paranormal, monsters, ghosts, the undead, serial killers, and, of course, the occult.  Witches and witchcraft are a common topic: but do they fall into the category of the occult? The supernatural? Monsters? I find myself asking this question often, as I witness the ebb and flow of witchy storylines in movies and TV.

Certainly the last few decades have included some memorable media stories about witchcraft and the occult, with this topic becoming very popular beginning with the mid-1960s occult revival: ROSEMARY’S BABY (1968), THE DEVIL RIDES OUT (1968), THE EXORCIST (1973), THE WICKER MAN (1973), THE OMEN (1976), SUSPIRIA (1977), THE BELIEVERS (1987), THE WITCHES OF EASTWICK (1987), THE CRAFT (1996), PRACTICAL MAGIC (1998), and THE BLAIR WITCH PROJECT (1999).  That last one, the indie miracle that changed horror cinema ever after by popularizing the “found footage” conceit, has been inspiring some comparisons lately, too: and another indie movie about witches approacheth, anything but stealthily. But more on that in a moment.

And of course there’s the wondrous Harry Potter franchise! The books that got kids reading again, and convinced some of the sadder souls residing in our less-enlightened communities that book burning needed to make a come back. Sigh. The movies were well done, too, increasing in sophistication with every episode, just as the characters did.

If you make a habit of reading my blog (and of course, you should!), you know I’ve been hinting lately that we may well be on our way to another Satanic Panic. I say this because the news media seems to sensationalize the tendency of law enforcement to turn to Satanism or the occult as a motive or methodology in horrific violent crimes, and the imagery and trappings of this phenomenon are drawn nearly directly from popular media texts (like the films mentioned above), and this unfortunate tendency has been with us for some time, with devastating impact (do a search on “The West Memphis Three“).

Television is adding to this problem, perhaps inadvertently, with dramas and crime procedural series that feature occult themes (like the excellent first season of TRUE DETECTIVE, or, more recently, AQUARIUS, which explores the early days of the Manson Family). We’ve seen it before, too, on THE X-FILES, MILLENNIUM, and various crime procedurals like CSI. Satan sells. And evil is sexy. Just ask the millions of viewers who tuned in to watch AMERICAN HORROR STORY: COVEN.

This week, the imminent opening of the independent (i.e., non-Hollywood) film THE WITCH, whose director Robert Eggers won the Director Award at the Sundance Film Festival for his debut film, has the internet and blogosphere in a tizzy. Despite the fact that the film has not officially opened, dozens of reviews have already appeared, and in perusing their headlines (I am not reading any actual reviews until after I write my own, which I will do after I see the film tomorrow–ETA: My review is now online! Check it out here), I have seen the words “Satan” and”Satanic” a number of times (as in: “THE WITCH is Satan-Approved“; “Nature is Satan’s Church“; “Satan Yawns“; etc.). And the use of that word is on a strange continuum ranging from positive (the endorsement by the Satanic Temple of Detroit is seen as good publicity for the film, and the descriptive use of the word “Satanic” is being equated with scary, and scary = big box office) to concerned but neutral (controversy over the timing of the film’s release to coincide with the biblical story RISEN–oh, and I have really been enjoying my Patheos colleague Chris Williams’ take on the publicity generated by this whole “cinematic holy war”). So far, negative reviews focused on the film’s Satanic themes are nonexistent; but that may change by the weekend when the film is available to the general public. It’s also getting raves for its feminist storyline.

In years past, after a film about witchcraft or the occult becomes popular in the United States, we’ve seen a concomitant rise in interest in the occult, both by would-be practitioners (THE CRAFT brought teenage girls to Wicca in droves) and by those who see the occult as a dangerous path. Protests abound, fuelled by the fear that evil might be taking over our fair nation. Then cooler heads prevail, and we realize it’s a tempest in a teapot, and we see some articles about how witchcraft isn’t so bad, really, and paganism is a life-affirming path, and we forget all about it until the next movie about witches comes along. But as television continues to give the movies a run for their money, it does appear that the future of cinema might just happen in our living rooms and not at the multiplex.

In an era of 24-7 news, streaming video and constant conversation via social media, popular culture affects the national mood as surely as politics or current events. Media *is* news, and what movies make us think and feel can strongly influence public opinion on just about anything. Morning-after-broadcast “water cooler” conversation has been replaced by instantaneous and ongoing discourse powered by memes, blogs, and constant electronic access. It is not surprising to realize we’re obsessed with fictional narratives; binge-watching is a form of compulsive, addictive behavior we’re only beginning to understand. We no longer partake of the pleasure of letting a story remain with us for a few days, puzzling out the mystery, wondering how that cliffhanger will turn out, enjoying the intrigue of relationships as they spark and smolder. We want to know, now. This constant consumption parallels the unfurling of the 24-7 news cycle and the two forms of media blur together. Facts and fantasy become enmeshed and jumbled. It’s an ouroboros, eating and, perhaps occasionally, poisoning itself. Nourishment and poison become indistinct.

As an interesting aside to all the “Satanic” hoopla this week, there is an odd story out there in the right-wing blogosphere that suggests that Judge Scalia’s death was the result of an occult ritual performed by President Obama, apparently in honor of the pagan festival of Lupercalia. You can’t make this stuff up. I predict a growing sense of panic, or at least nervousness, in the current zeitgeist. THE WITCH is poised to make box office history. RISEN will probably get a religious conversation going. How will these two films, squaring off in theaters across America beginning tomorrow night, elevate or enflame the conversation about good and evil in America? Stay tuned. 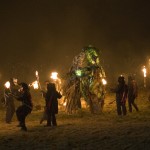 February 20, 2016 THE WITCH: The Media Witch's Review
Recent Comments
0 | Leave a Comment
Browse Our Archives
get the latest from
Pagan
Sign up for our newsletter
POPULAR AT PATHEOS Pagan
1

Green Witch Plant Profile: Rosemary For...
3 Pagans and a Cat
Related posts from The Witching Hour 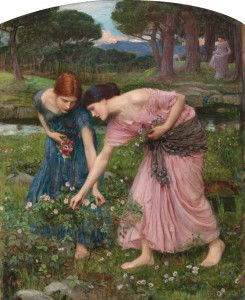