The Impossibility of Being President and Following Jesus 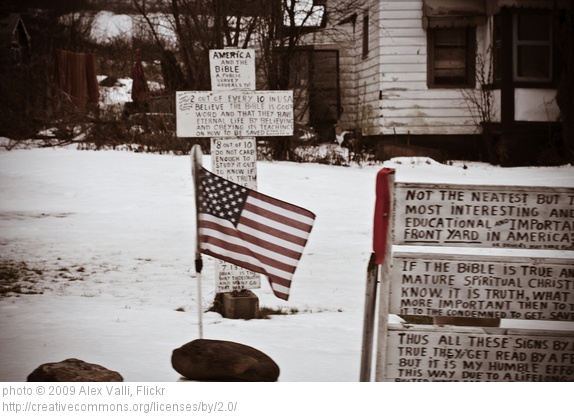 Content Director’s Note: This post is a part of our Election Month at Patheos feature. Patheos was designed to present the world’s most compelling conversations on life’s most important questions. Please join the Facebook following for our new News and Politics Channel — and check back throughout the month for more commentary on Election 2012. Please use hashtag #PatheosElection on Twitter.This article responds to the question: Does a Candidate’s Faith Matter?

It’s impossible to be the president of the United States and to follow Jesus.* This is a radical claim in this heated election season, without a doubt, but is why I couldn’t care less what religion a candidate claims to adhere to.

I’m going to demonstrate why the personal faith of our candidates doesn’t matter. I do this at the risk of offending some fellow Christians who don’t hold my same viewpoints on the following issues. This certainly is not my intention as I always try to approach divisive issues with passion balanced by charity. I hope what I say is full of both love and zeal.

Growing up, I was taught that America is God’s second chosen nation. We are a country that provides liberty for all who believe in the holy institution of democracy. When we fight wars, its always so that oppressed peoples can be liberated, just like Jesus would want them to be. War leads to peace, which yields freedom for all.

This nation emerged in history at the appropriate time to modernize the barbaric and to be an example of Christ to the nations, at least this is the impression I had as a child and young adult. Interestingly, when issues like the genocide of Native Americans came up, it was mourned and quickly left in the past. The same was true of slavery. These things took place in our early history because people simply didn’t know better. Nevertheless, the logic was that this nation was founded on Christian principles by devout godly men – sincere followers of Jesus. I now see this glossy story as a legitimizing myth. It is impossible to found, maintain, defend, and expand a nation while following Jesus’ teachings. Here’s why.

Early Christians, in the few hundred years following the New Testament period but before the Constantinian Shift** (which eventually led to the marriage between the cross and the sword), refused to be connected to any profession connected governmental leadership. For instance, consider these words from Hippolytus around 218 CE (one of many examples of this conviction):

The professions and trades of those who are going to be accepted into the community must be examined. The nature and type of each must be established…brothel, sculptors of idols, charioteer, athlete, gladiator…give it up or be rejected. A military constable must be forbidden to kill, neither may he swear; if he is not willing to follow these instructions, he must be rejected. A proconsul or magistrate who wears the purple and governs by the sword shall give it up or be rejected. Anyone taking or already baptized who wants to become a soldier shall be sent away, for he has despised God (as quoted in: Jesus for President).

The early church, convinced as it was that Jesus commanded his followers never to resort to violence, understood that certain jobs were inconsistent with being fully devoted disciples of Christ. Of course, working as soldiers or magistrates were not the only ways to have one’s commitment to the faith called into question. Any profession that promoted actions and attitudes inconsistent with holiness were deemed opposed to following Christ. This wasn’t some sort of fundamentalist legalism, but rather quite obvious ways to not be in line with the way of the Kingdom (similar to how we might view blatantly sinful jobs such as: willful prostitution, pornographic film producers, or drug dealers).***

Having a career that placed oneself in a position to use violence (directly or indirectly) always makes it impossible to fully follow Jesus. Violence is opposed to the way of Jesus. In fact, state sanctioned violence crucified the incarnation of God. And according to the Scriptures, God raised Jesus from the dead and exposed the governmental powers of their evil. Colossians 2.15 says:

And having disarmed the powers and authorities, he made a public spectacle of them, triumphing over them by the cross.

Jesus’ resurrection disarmed the powers (both visible and invisible) of their ultimate weapon – death via capital punishment. The greatest violence of the state couldn’t hold down the true Son of God!

Of course, the question of executing criminals may not be as big of a deal for a modern day leader. The President, under the right policies could oppose the death penalty. And if that were the only access to violence that our President had, then perhaps he (or she) could in fact faithfully follow Jesus. But we know that the President of the United States functions as our Commander-in-Chief (head of the military). He is at the top of the military hierarchy. When drones strikes occur under the President’s watch as innocents are unjustly killed, those actions are a direct extension of his authority. When Osama Bin Laden was shot in the head by a Navy SEALs team, the blood was on the hands of the President (as well as the soldiers and all who were involved).

Jesus taught: “But I say to you: don’t use violence to resist evil!” (Matt. 5.39, KNT). In the same breath he added: “love your enemies and pray for those who harass you” (Matt. 5.44, CEB). The New Testament is clear: you cannot follow Jesus and carry the sword of vengeance. Some will argue that God allows the government to use the sword to “punish evildoers.” This is true, not to the extent evangelicals often think; but yes, the governments of the world are here to maintain order.

Yet, even in the passage that is often appealed to, Romans 13, we clearly see that the church and the state are never thought of as blending roles. In other words, a “church person” would never simultaneously be a governmental leader (at least, not for long) as Paul saw things. You can’t wear two hats, a religious one and a secular governmental one, and follow Jesus. Jesus invites us to count all things as rubbish besides knowing him.

So, in this heated election season, I’m convinced that any discussions about which candidate is more “Christian” is mere folly. On the surface, Obama clearly wins this discussion (even if some conservatives would consider his faith as outside the bounds of orthodoxy). I personally don’t doubt the sincerity of Obama’s Christian faith, but when it comes to following Jesus, he fails on all issues pertaining to his role as Commander-in-Chief (head of the military). Perhaps here we need to make a clear (grace-filled) distinction between being a Christian and following Jesus in all areas of discipleship.

Faithfully following Jesus in all obvious areas of discipleship and being President is impossible in our current system. For this reason, I don’t think we need to worry about which faith a candidate subscribes to. If you vote, which I’m still uncertain about, cast a ballot for the person who will do a better job for the most vulnerable in our world. See a vote as the lesser of two evils and nothing more. Don’t waste time worrying about if the candidate is Muslim, Christian, Jewish, Mormon, or unaffiliated. Remember, it’s impossible to follow Jesus in this one basic matter of discipleship (nonviolent love) and to be the President of the United States.

*To be clear, I am not saying that it is impossible for someone to serve in a violent profession and to be a Christian. I know many Christians who are in the Army, Navy, police force, and in government office. I think they are wrong on how they read the Bible on this issue, but I would never call them non-Christians. In this article I try to make a distinction between being a “Christian” and being a follower of the way of discipleship in Jesus Christ. Someone is neglecting an element of discipleship if they resort to violence. That is my point. It is not a judgmental point, but one that comes from a posture of grace and love.

**I realize that this shift, although drastic, was gaining momentum in some sectors of the church prior to Constantine. However, those endorsing violent professions were considered outside of the mainstream of the fold.

October 19, 2012 Did Jesus have a wife? Ben Witherington chimes in...
Recent Comments
69 Comments | Leave a Comment
""
Ixire What is the Kingdom of God? ..."
""
I8UrBeans Cosmic Signs Don’t Signal a Rapture ..."
""
AMENOLITY Cosmic Signs Don’t Signal a Rapture ..."
""
StayBlessed Love is the Only Way: Why ..."
Browse Our Archives
Related posts from The Pangea Blog