Is preaching nonviolence bad for evangelism?

Many in the evangelical realm, especially pastors and lay leaders committed to church growth, believe that proclaiming the revolutionary vision of nonviolence and Kingdom allegiance is antithetical to evangelism. In other words, some folks (with good intentions) worry that emphasizing an Anabaptist (peace and justice) ethic might make the Gospel unattractive in our American context.  I’m quite sympathetic to these concerns but sometimes wonder if we church leaders would be willing to apply this logic elsewhere?

Are the following areas bad for evangelism? –

Every example above, and countless others, can hinder evangelistic efforts. One of the tasks of discerning what the Apostle Paul called “stumbling blocks” is to first discern the underlying motives and assumptions that fuel them. How we communicate our values is just as important as defining them in the first place. Many of the convictions listed above have hindered evangelism, most of which are driven more by cultural values than Kingdom ones. The things that the church does regularly can in fact block outreach efforts within certain demographics. This matters in every part of the message and movement of Jesus that we mediate to the world around us.

Jesus and the Apostles did little in their preaching to soften the cost of discipleship. The price only goes on sale when we promote our own agendas rather than the priorities of the reign of God. One central element of the gospel of the Kingdom is peace. Why would we worry about proclaiming something that is so beautiful, but be content to expound other ideas that are not motivated by following Jesus? May we count the cost afresh in our day!

The realities of post-Christian America invite us to salvage the Christian radical roots of nonviolence, empire subversion, and justice for the poor. My conviction is that the moment the Anabaptists (and like-minded folks) have been waiting for is right now. The day has come when the church and the Christian story is no longer at the center of public discourse, in many ways because of the way evangelicalism engaged in politics without a peacemaking agenda.

Many in our society, who continue to see the destructive effects of militarism, are ready for an alternative paradigm. Hearing Christians preach peace is actually a bridge to Jesus and not a blockade for some people who have been turned off by “organized religion.”

As a church planter, the message of enemy love, justice for the poor, and a suspicion towards the agendas of empire, will be part of the Gospel that we preach and live in the Seattle area. Those of us with Anabaptism in our history (or who share similar values for peacemaking) have the opportunity to carry our cross for the sake of the world.  In the days ahead, we may discover that the way of peace, justice, and empire subversion is actually a bridge to leading many in this post-Christian culture into a relationship with Jesus Christ.

We ought to do all we can to not allow the cultural garb of evangelicalism to block our access to those unacquainted with Jesus. This should never come at the expense of core convictions of Christian living, especially ones that have the potential to turn the world upside-down.

How should we navigate the tension between evangelism and proclaiming our values? How have you seen this done well? Any “horror stories?” 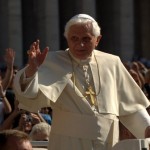 March 12, 2013
Oremus: A Catholic Friend Brings Us His Prayer Request for the Papal Conclave
Next Post

March 21, 2013 Parenting Reimagined Podcast: Dreaming of a Daughter Liberated and Loved
Recent Comments
9 Comments | Leave a Comment
"big fan of Boyd"
Owen W Recommended Resources: "Spiritual Warfare" Series by ..."
"Wait"
Julia 2 Reasons NOT to ‘Keep Christ ..."
"What"
Julia 2 Reasons NOT to ‘Keep Christ ..."
"Only having come cross this blog today, as a South African, I would like to ..."
Keith McLachlan Name Change Myth: Saul Never Became ..."
Browse Our Archives
Related posts from The Pangea Blog