Politicized Christology in Christianized Politics: “Constantinianism” of “Right” and “Left”

This is a guest post to get us thinking about political discourse as Christians. Thanks to Darrin W. Snyder Belousek for this great guest submission!

In a recent essay at The Week, Damon Linker responds to several writers in First Things who lament the triumph of “secular liberalism” and the demise of “civic Christianity” in American politics, evidenced acutely by the (anticipated) victory of same-sex marriage in the arena of constitutional law at the Supreme Court.  Linker writes:

“I’d like to suggest that they should get over it — that, rightly understood, Christianity can be most fully itself when it relinquishes political and cultural rule, when it ceases to identify itself so closely with any particular political order…

“It is a perennial Christian temptation — one growing out of that most distinctively Christian doctrine, the bodily incarnation of God — to sanctify (and to see God embodied in) the political order that prevails at any given moment of history.”

I agree with the overall trajectory and tenor of Linker’s argument—not because I am a theological liberal who is skeptical of the church’s ethical teaching, but precisely because I am an orthodox confessing Christian.  The quest to see Christ embodied in a particular political order, which has been dubbed “Constantinianism” by theologians, should be seen as a distortion of Christianity.

That said, I think Linker’s analysis does not go deep enough.  He writes:

“Whether in the Middle Ages or the contemporary United States, it is a betrayal of Christian ideals to give in to the incarnational temptation. In mistaking one particular political community for the city of God that always lies beyond any earthly city, it makes eventual disappointment inevitable.”

Linker’s critique, which echoes Augustine, is correct as far as it goes.  His Augustinian critique, however, needs to be supplemented with (if you will) an Ephesian and Athanasian critique.  Yielding to the “incarnational temptation” gives way not only to political disappointment but also to ecclesiological corruption, soteriological deviance, missiological confusion, and, ultimately, Christological error.

First, Constantinianism points toward a corrupted form of the church: if Christ can be embodied in a particular political order, then the politeia (political community) can supplant the ekklesia (church community) as the unique sacrament in and through which the soma Christou (body of Christ) is fully present in history (cf. Ephesians 1).

Second, Constantinianism suggests a deviant doctrine of salvation: if Christ can be embodied in a particular political order, then we can make salvation for ourselves through works by the accomplishments of our activism or by identifying with our causes rather than receive salvation from God through faith by the grace and peace of the cross (cf. Ephesians 2).

Third, Constantinianism leads to a confused mode of mission: if Christ can be embodied in a particular political order, then the church can fulfill its commission to make known “the wisdom of God” by promoting our “agenda for America” rather than proclaiming “the mystery of Christ” revealed through the gospel (cf. Ephesians 3).

If, on the one hand, Christ is “begotten not made” and so has eternal supremacy over all creation (per the Nicene Creed), then Christ as Lord stands in judgment over every political order such that no political order within creation can ever claim to instantiate the reign of Christ.  Every political order within creation necessarily falls short of Christ’s reign precisely because Christ, though incarnate, is no mere creature—and thus no mere creature, not even the highest of the “rulers and authorities,” can ever share the place of Christ as Lord of all. Thus, the “high” Christology of the Nicene Creed is actually anti-Constantinian at the same time as it is anti-Arian.

If, on the other hand, we seek to merge the rule of Caesar with the reign of Christ and so sanctify the rule of Caesar as the will of God (per Constantinianism), because we cannot credibly elevate Caesar to the status of Christ (“begotten”), then we must demote Christ to the status of Caesar (“made”). Thus, the Constantinian project requires that we make Christ a creature elevated by God to first status in creation under God, parallel to Caesar a creature elevated by God to second status in creation under Christ, so that we can then link the throne of Caesar with the throne of Christ. That is, Constantinian politics requires an Arian Christology.

The irony here is that conservative Christians who would otherwise insist on maintaining doctrinal orthodoxy, by desiring to see Christ embodied in American politics might actually be (unintentionally) tinkering with a new-age variant of ancient heresy.

An even bigger irony, in my view, is that I see much the same coming from American Christians on the political left, including some “social action” Evangelicals and “peace-and-justice” Anabaptists, many of whom see themselves as opposing the “theocratic” tendencies of the Christian “right.”  Many on the Christian “left” seek to directly translate (their interpretation of) the gospel into progressive policies and thereby effectively reduce Jesus to liberal ideals (“tolerance,” “inclusion,” etc.).  Accordingly, we often hear from the Christian “left” claims of this form: “Jesus was for <fill in liberal ideal>, therefore we should support <fill in progressive policy>.”  Consequently, when the Christian “left” is faced with skepticism from other Christians, we often hear responses to this effect: “If you don’t support policy X, then you are not a true follower of Jesus.

So, if you cannot imagine Jesus passing judgment on your favored political agenda (whether of the “right” or of the “left”), then you just might be a new-age Arian after all.

Darrin W. Snyder Belousek teaches philosophy and religion at Ohio Northern University and is the author most recently of The Road That I Must Walk: A Disciple’s Journey (Cascade Books 2014). 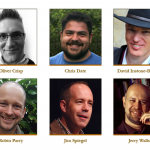 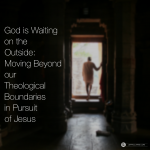 March 23, 2015 God is Waiting on the Outside: Moving Beyond our Theological Boundaries in Pursuit of Jesus
Recent Comments
16 Comments | Leave a Comment
"I am a seminary student and I do not see concrete proof in a Rapture. ..."
Charles Owen Why the Rapture isn’t Biblical… And ..."
"Good luck on trying to politely tell those who favor Patriarchy or complementarianism that you ..."
esbee Mutuality in the Church for the ..."
"yup, have you ever heard a Hungarian pronounce Gyorgi? George is WAY easier. I've never ..."
RMS Name Change Myth: Saul Never Became ..."
"The usual strawmen and abysmal research from someone with an axe to grind...and still manages ..."
Sojourning Whyman Why the Rapture isn’t Biblical… And ..."
Browse Our Archives
get the latest from
Progressive Christian
Sign up for our newsletter
POPULAR AT PATHEOS Progressive Christian
1

QAnon and Gullible Christians: The Devil...
The Thoughtful Pastor