Giving Up on Nonviolence: For Those Who Want to Believe Peace is Possible

Giving Up on Nonviolence: For Those Who Want to Believe Peace is Possible October 20, 2015 Kurt Willems

The more I watch the news, scroll through my Twitter and Facebook feeds, and listen to NPR, the more I wonder if peace is possible.

The idea that we are progressing as a human race is simply folly. American bombs kill innocent aid workers in hospitals. ISIS displaces large segments of Iraqis and Syrians. Regular folks are being beheaded. The tension between Israel and Palestine hasn’t a hint of slack. Peace feels futile.

You grew up in a Christian culture that told you that violence was a bummer, but often needed. Violence was given support from the Hebrew Scriptures. Violence was justified with the New Testament by reading Romans 13 in isolation from its literary and historical context. And you bought it: hook, line, and sinker.

When 9/11 hit, you welled up with sadness and anger. No one kills innocent people on our land… no one!

Then, as Bush announced that we would be going to war with our so-called enemies, you cheered him on in the name of Christ. You may have even applied the passage from John 15.13 to soldiers: “Greater love has no one than this: to lay down one’s life for one’s friends.” [If you are reading this and saying, “so,” the problem is that this passage has zero to do with using violence while laying down one’s life. In fact, crucifixion is about laying one’s life down for one’s enemies.].

oh, in case we forgot, America’s at war…

You began wondering: Why? Is this war even justified? Does this war have anything to do with 9/11, actually?

The questions took on a life of their own from that point. Then you started reading your Bible with fresh eyes and noticed something: The New Testament never teaches that violence is allowable for followers of Jesus.

So you wrestled with the implications. What about innocent people? What about a child? A spouse? A puppy? Kitties (Oh, never mind)?

And when you came out the other side, even with some ambiguity and theoretical shades of gray, you knew that to be a Christian was to believe that peace is possible. In fact, you came to believe that creative nonviolence paired with prayer was the only way Christ taught his disciples to engage with evil in the world.

Militaries will do what militaries do, but we who follow Jesus will do something different. In fact, most Christian pacifists believe that pagan force (when used with restraint) can be the lesser evil in some limited circumstances, but we aren’t to promote or participate in that. We follow Jesus.

In Christ, you came to believe, peace was possible: even if it meant risking unarmed death to accomplish that end.

And then came ISIS.

And the continued work of the Taliban.

And the destruction of Syria and parts of Iraq.

And children being molested and crucified.

And men being beheaded.

And women being forced into sex slavery.

And bombs being dropped both from Gaza and even more so in Gaza.

Now you don’t know what to think. Me neither.

Giving up on nonviolence seems like the only way forward. You feel guilty. So do I. But… ISIS, et al.

And at the same time, deep in your bones, you still want to believe that peace is possible. So do I.

And it is the hope that peace is possible that keeps me trusting that Jesus’ way can make a difference. It is hope both lures me to face the evil and pain of this world, while also embracing the dream of a better world. The world will not always be like this. A day will come when evil is dealt with once and for all and when peace and justice will flow through the cosmos refreshing every square inch of reality with the love of God.

Those of us who see this dream must choose to imagine the world as it ought to be. With imaginations activated, even in the a world of ISIS and fear we can see possibilities for peace. Where the worst rivalries exist, in places like Israel/Palestine, peace can show its lovely face. Followers of Jesus (and anyone likeminded in the cause of peacemaking) must not lose hope. We can be part of making a better world, sometimes we just need inspiring reminders.

One of these reminders connects me back to a life changing trip I took to Israel/Palestine in 2014 with The Global Immersion Project (if you care about peacemaking, these folks need to be on your radar!!!). A new film, which is about 5 mins long, is called “Drop Makers.” It features three amazing men who nudge me forward in the midst of my nonviolent doubts. Here’s the description from the Humdinger Pictures website:

The Drop Makers short film looks at the heart of peacemaking in Isreal/Palestine.  Milad, Husam, and Muhmoud give shape to the appearance of a life lived fostering peace in an endless cycle of violence.  Where true strength is found not in the application of power, but in the restraint to use it.  Where hope lies in small deeds that may indeed be the very seeds of effective change.

If you need inspiration, start with this film.

But even more, if you need inspiration, look to Jesus. When violence would have saved his life, he chose to relinquish it: the ultimate model of a peacemaker. Jesus died for his enemies to make peace with them. May we carry our cross and make peace in our neighborhoods and advocate for peace in our world. Peace is still possible, but only if we do not give up hope.

THIS WEEK ON THE SERMON PODCAST: “We,” a series about the core values of Pangea | Communities in Seattle, Wa. In the first talk of the series we looked at our core value “Transformation: We choose the subversive path of knowing and following the crucified Christ.” In the second talk, we explored “Hope: We choose to imagine the world as it ought to be.” In that second talk, we also introduced our “Offering Hope Initiative,” in partnership with Mennonite Central Committee in their work for peace and justice among the refugee crisis of Syria and Iraq. PangeaCast: iTunes, Feed. 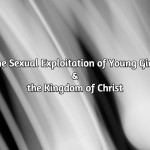 October 20, 2015
The Sexual Exploitation of Young Girls & the Kingdom of Christ
Next Post

October 23, 2015 New Conservative Christian Documentary Calls Out Guns as Anti-ProLife
Recent Comments
6 Comments | Leave a Comment
"I agree with this article, to me anything man made is pagan worship and idolatry ..."
Susan Koesters Just Jesus & Unjust July 4th: ..."
"Message needs to be heard everyday! Going thru some older emails.lol"
Douglas McCall Jesus’ Radical Kingdom Reformation within Judaism ..."
"I am a seminary student and I do not see concrete proof in a Rapture. ..."
Sagacious0ne Why the Rapture isn’t Biblical… And ..."
"Good luck on trying to politely tell those who favor Patriarchy or complementarianism that you ..."
esbee Mutuality in the Church for the ..."
Browse Our Archives
get the latest from
Progressive Christian
Sign up for our newsletter
POPULAR AT PATHEOS Progressive Christian
1