Why Studying the Apostle Paul Matters | In fact, it’s a matter of life & death!

As I announced a couple of weeks ago, my latest project is The Paulcast: A Podcast all about the Apostle Paul. After my introduction episode, titled “Surprised by Paul,” I launched straight into a series called Entering the Conversation. Here’s why.

In my experience, many people talk about the things Paul wrote down without doing the hard work of entering the world Paul lived in. So, without knowing it, we read this statement or that in one of his letters and hear something totally different than those first century church communities would have heard.

We also have the challenge of trying to catch up on a theological conversation that has been going on for about 2,000 years. Augustine had an opinion or two which Luther [traditional view] built upon and the New Perspective rejected and the radical New Perspective has pushed even further. What I’m referring to specifically is the way that interpreters of Paul’s letters have framed his famous interaction with his heritage as a Second Temple Judaean in the first century.

The only way to know how best to answer these questions is to dive into the historical study of Paul. And this, well…….

Time that many folks do not have.

But, some of us have made studying Paul (and other sacred texts) part of our career and education. Since this happens to be the case with me, I want to save you hours on all of the reading that would be needed to get “caught up.” Thus, this first #ThePaulcast series is all about distinguishing the broad views of Paul in scholarship, so you can decide for yourself how to answer questions, like those above, about Paul’s relationship with the Law/Torah.

I invite you to share with your friends about this new podcast. If you like it, please review it on iTunes as well!

Here are the links to find this series: iTunes, Stitcher, Feedburner.

Here are all the titles for Entering the Conversation:

A Matter of Life & Death

I want to add that how Christians refer to Jewish practices matters greatly. Historically, as I explore in the first episode of the the series, Christian rhetoric about Jewish folks has been horrendous at times. A lot of this had to do with how folks talk about Paul’s letters. In many streams of thought, Christianity trumps Judaism as though our religion is superior and theirs lacking. Of course, those who follow Jesus believe that following Jesus is the best way to spend one’s life. But lest we forget: Jesus is Jewish. Paul was Jewish. To lose sight of this, or to say that only ‘certain Jews’ were good, takes us on a dangerous path.

Martin Luther really struggled with this tension. His experience led him to read Paul as though the Apostle was against Judaism. In other words for Luther, the Law was about ‘works-righteousness’–earning favor with God. Christ is about recognizing (even with the Law’s assistance) that one can’t earn a thing from God. Thus, Judaism was the warm-up act, a failed one at that, for the real thing: Christianity. Eventually, this bias leaked out in anti-semitic ways that would be used to justify the Nazi regime (as I discuss on #ThePaulcast in detail, with quotes and context included).

Studying Paul matters because when we get him wrong (at least seriously wrong), we risk setting up a trajectory that looks contradictory to the way of Jesus. Jesus, as Paul understood him, taught that the Law was good and that love is the centerpiece of the Law. If we are committed to the “law of love,” then we must take our approaches to Paul with the utmost seriousness. Talking about Paul in intelligent ways isn’t something for only the ivory tower of academia; it is something that has profound ramifications for our ability to love others as Christ commanded and Paul upheld. Studying Paul really does matter. In fact, it’s a matter of life and death. 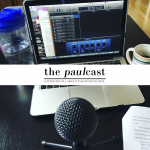 May 2, 2016 Entering the Conversation on Paul and Judaism (Podcast Episodes)
Recent Comments
1 Comment | Leave a Comment
"Message needs to be heard everyday! Going thru some older emails.lol"
Douglas McCall Jesus’ Radical Kingdom Reformation within Judaism ..."
"I am a seminary student and I do not see concrete proof in a Rapture. ..."
Sagacious0ne Why the Rapture isn’t Biblical… And ..."
"Good luck on trying to politely tell those who favor Patriarchy or complementarianism that you ..."
esbee Mutuality in the Church for the ..."
"yup, have you ever heard a Hungarian pronounce Gyorgi? George is WAY easier. I've never ..."
RMS Name Change Myth: Saul Never Became ..."
Browse Our Archives
get the latest from
Progressive Christian
Sign up for our newsletter
POPULAR AT PATHEOS Progressive Christian
1

The true fix is not education
slacktivist