Protestants Don’t Know What to Do with Mary

Protestants Don’t Know What to Do with Mary December 22, 2017 Kurt Willems 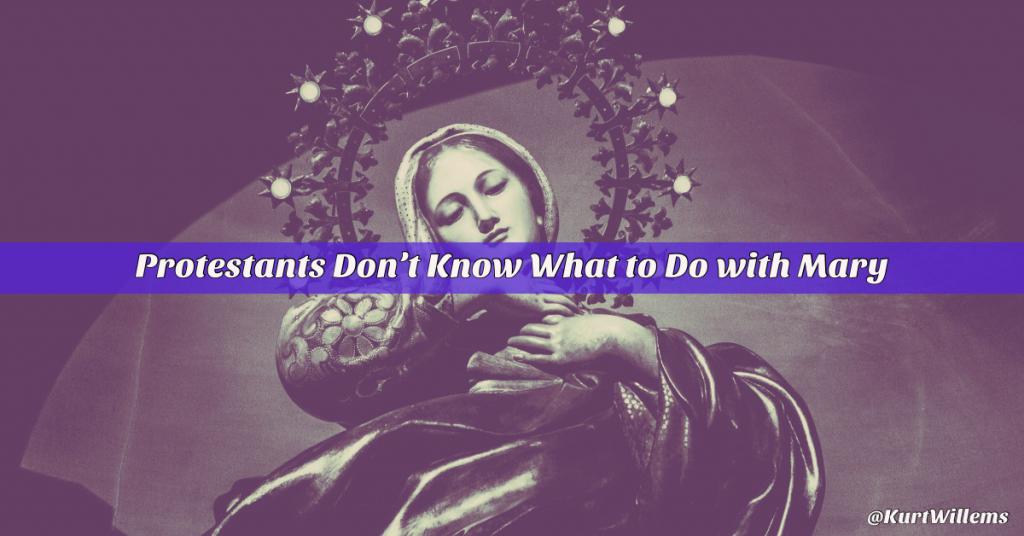 Mary. There’s something about her, so they say. Protestants haven’t known what to do with her. I’ve seen two basic trends.

2) Protestants who run from Mary’s miracle.

Both of these trends are troubling. Many “traditionalists” ignore Mary (for the most part) because of the “Catholic” thing (insert eye roll here). In their ignorance, beyond the images in Christmas cards and in attempting to prove Jesus was God due to the miraculous virgin conception, they lose the power emanating from Mary’s song and testimony about God’s good work to overthrow the powerful and oppressive of this world. She was a prophet who took a stand with the powerless, empowered by her powerful God. The Romans and those like them, do not stand a chance in the grand scheme.

Many “progressives” (interestingly, although I write for this channel on Patheos, I’m likely the most “evangelical” of the bunch 😉 ) resist the idea that God miraculously impregnated Mary. They write deconstructive blogs and books about how this is irrational and attempt to show that the text in the Hebrew Bible that Matthew appeals to—Matthew 1.23 / Isaiah 7.14—is about a young woman in its original context, not about a virgin. Well, as Pete Enns wisely demonstrated, this argument assumes that Matthew is ignorant of this ‘original context’ and was clearly misinformed when he wrote his gospel. In fact, the author of Matthew knew exactly what he was doing: using the Hebrew Bible as a tool for understanding reality in light of the life, death, resurrrection, and ascension of Jesus. The writer of the Gospel makes this connection in a creative way, but his argument isn’t dependent upon it. The author of Luke makes the same claim and doesn’t need a “proof text” to seal the deal. Nor did Matthew.

I have major issues with both of these polarities when coming to Mary as a Protestant Christian.

So, let’s look at these a bit more. First, Mary’s subversive joy. She says:

48 He has looked with favor on the low status of his servant. Look! From now on, everyone will consider me highly favored 49 because the mighty one has done great things for me. Holy is his name. 50 He shows mercy to everyone, from one generation to the next, who honors him as God. 51 He has shown strength with his arm. He has scattered those with arrogant thoughts and proud inclinations. 52 He has pulled the powerful down from their thrones and lifted up the lowly. 53 He has filled the hungry with good things and sent the rich away empty-handed. 54 He has come to the aid of his servant Israel, remembering his mercy, 55 just as he promised to our ancestors, to Abraham and to Abraham’s descendants forever. (Luke 1.48-55, CEB)

This passage, amongst many other themes, contains within it a declaration about God’s commitment to right the wrongs of this world, especially for those within God’s covenantal family. Mary is, of course, situated within the Roman Empire which has annexed the Land from the Jewish (and other inhabitants). Everyday, they see Roman soldiers with weapons and the authority to do basically whatever they want to local people. The gap between rich and poor continues to widen, with little chance of finding yourself in a “middle class.” Violence and subjugation are the reality of God’s people at this time. And in the midst of this, Mary—a young woman (and yes, a virgin)—declares that the Roman thrones (and those who sit on thrones under that structure like Herod, etc.) do not have the final word. God is on the move to lift up the lowly.

Why does Mary sing with joy? Because her God is on the move through this miracle in her body. Her body bears the solution to the suffering of this world. Her people’s cries have not been ignored. God hears her. God sees her. God is with her. God is with all who are under the oppressive power of this world. Protestants who run from Mary, because she is part of the bath water we tossed out in the Reformation, have missed why the baby she bore was such a source of joy and hope For this impoverished Jewish woman in the first century. Scot McKnight captures how this prophetic bearer of God spoke into her context and how she might speak into ours:

Mary’s… words form an announcement, a voice from the bottom of society, that justice has finally arrived. This means the powers are being subverted. For others sitting with her at the margins of society, her words could only mean that Herod the Great, king of Israel, who had his own family members assassinated and who had taxed Israel well beyond her means, would be overthrown. When Mary declared that God “has brought down rulers from their thrones,” anyone listening at the time would have heard implications for Herod the Great and Rome. When she proclaimed that God has “lifted up the humble” and “has filled the hungry with good things,” Mary’s listeners would have turned their attention to poor people like Mary herself. …The Magnificat was for Mary’s world what “We Shall Overcome” was to the African American community in the USA in the 1960s and 1970s: We shall overcome, we shall walk hand in hand, we shall all be free, we are not afraid, we are not alone, the whole wide world around, we shall overcome. (Scot McKnight, The Real Mary, 17-19)

The marriage between certain American Christians and American imperial politics have created a situation where Mary’s joy is coopted to prove that God is on the side of particular agendas that favor the very sorts of structures Mary preached against! We need more subversive joy in our day among Christians who say that we aren’t defined by the power-brokering of the right-left spectrum of politics, but by the subversive King who Mary joyfully bore, birthed, and nurtured. Yes, she experienced a miracle, a virgin conception which led to the birth of the incarnate God, the Savior of all. But she also did so in a way that spoke against the thrones of the powerful.

Yet, a trend I see among other Protestants is to run from Mary’s miracle. This is equally a tradgey, originally funded by the Enlightenment project and carried forward by certain forms of postmodern deconstruction impulses. As I already stated in the introduction, there is no reason to force the author of Matthew to fit the original context mold of Isaiah. The way the New Testament utilized the Hebrew Scriptures was often creative in light of the inbreaking Kingdom of God and its King. Neither do we ignore the context, but we read it where it needs to be read, depending on the issue at hand. Here, both Matthew and Luke agree: Mary became pregnant by the Holy Spirit, not by Joseph.

Ignoring this is tragic. Mary’s miracle, although not central to Christian identity or belief, is certainly important. This is the means through which God became human and walked among us. God didn’t adopt or choose Jesus. God, through the Spirit, became human miraculously. God worked outside of nature’s normative rules. And God can do this without being coercive. Mary was willing and ready to bear the Divine.

And personally, I don’t see the need to deconstruct this beautiful story. It is beautiful—too beautiful to be anything but a reflection of reality. Beyond the amazing narrative qualities, I see no reason why a Christian who—1) believes in a real and living God, 2) believes that this God in some way became human, 3) believes that this God literally rose from the dead after being executed by the Romans—has any reason to cast doubt on the miraculous virgin conception. For me, the resurrection of a human (who happens to be God, but all of us in the future) is the greatest intellectual leap to be made by a Christian. If we can affirm that wild historical event as true, the virgin conception and birth, the miracles of Jesus in the gospels, the reality of demons and angels, and so many other miraculous elements of Christian faith aren’t huge leaps. If we buy the resurrection, the rest of the biblical narrative isn’t much of a challenge by comparison.

Embracing All of the Biblical Mary

I know that what I’ve said about Mary is going to frustrate many people: people I love and respect. Please know that I don’t say these things to pick a fight or draw lines in the sand about who’s ‘in and out.’ By no means! Rather, I am sharing my own process into embracing a more robustly biblical and human Mary. She is the mother of God. This was a miracle. And this was subversive to the powerful. My hope is that we can affirm all that the Scriptures say about Mary! 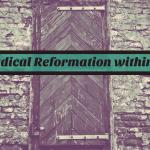 December 11, 2017
Jesus' Radical Kingdom Reformation within Judaism (and some stuff about The Reformation)
Next Post 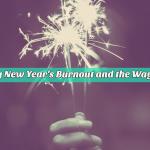