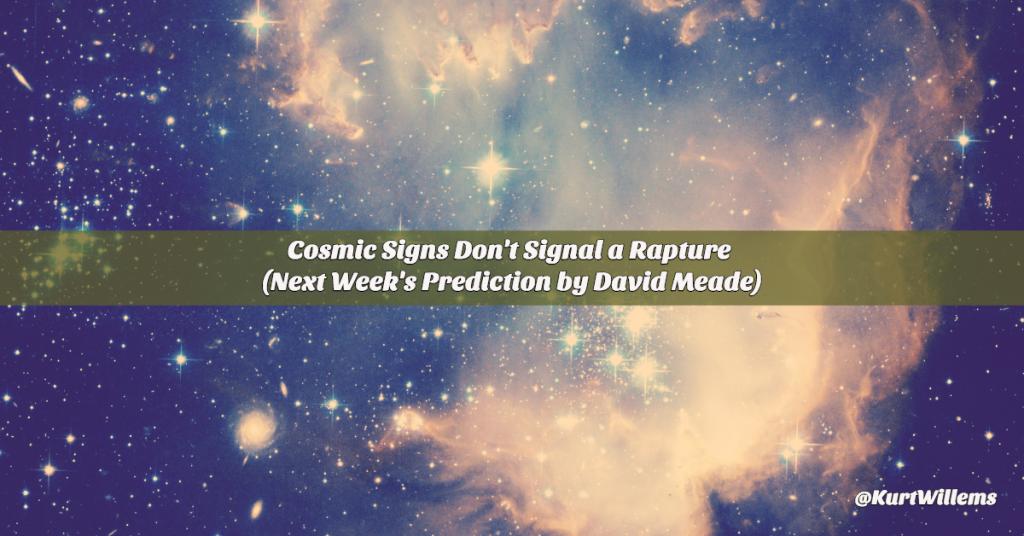 I thought you might want to know that the rapture is set to occur on April 23rd.
According to Christian Numerologist David Meade, we all need to be ready.

<<<By the way, this reflection is based on podcast episode #4 from, Rapture Drill: Reframing Revelation, the End Times, & Our Weird Obsession with the Apocalypse.>>>

Planet X, which isn’t a thing according to NASA, is set to appear as a sign to bring about the rapture and tribulation. This will lead to the eventual destruction of the planet. One article summarizes it this way:

On April 23, the sun, moon, and Jupiter will align in the constellation Virgo to bring on the start of the biblical Rapture, according to the latest claims.

And, that night, it’s said the mysterious planet Nibiru will appear in the sky, followed by the onset of World War III, rise of the Antichrist, and seven years of Tribulation…. The claims center on passage 12:1–2 from the book of Revelation, which states: ‘And a great sign appeared in heaven: a woman clothed in the sun, with the moon under her feet and a crown of twelve stars on her head. She was pregnant and crying out in the pain and agony of giving birth.’

The woman in question, according to the theory, is Virgo.

While this alignment isn’t all that rare, and is said to occur every 12 years, some claim an additional alignment representing “the Lion of the tribe of Judah” is unprecedented, and will spark the Rapture.

David Meade advocates his view based on signs in the cosmos and signals in the book of Revelation.

And here’s the thing: most people across the theological spectrum agree.

However, there is one area where we do have disagreements that are quite relevant to this discussion.

How are we to read cosmic-sounding apocalyptic language in the Bible?

There are two broad approaches. ​

<<<If you find my online ministry helpful, would you consider joining me as a financial partner through Patreon for as little as $3 /month? I’m currently still in the ‘red’ with all the projects I’ve taken on [The Paulcast, Pangea Blog, Rapture Drill, and Theology Curator] and am trying to get 100 supporters in on the journey with me. Thanks for your consideration!>>>

The first is what most people do. They read passages about signs in the heavens and think: “It’s the end of the world as we know it.”

This is consistent, especially among our sisters and brothers from a dispensational background. ​Although the passage David Meade cites as support for his latest theory (shocker: he’s been wrong in the past) in Revelation 12 may not always be read as a clear passage citing the end of the world, there are other passages that use more obvious apocalyptic shock that are used this way.

I’ll cite two of them:

“In those days, after the suffering of that time, the sun will become dark, and the moon won’t give its light. 25 The stars will fall from the sky, and the planets and other heavenly bodies will be shaken. Mark 13.24-25 CEB​

I looked on as he opened the sixth seal, and there was a great earthquake. The sun became black as funeral clothing, and the entire moon turned red as blood. 13 The stars of the sky fell to the earth as a fig tree drops its fruit when shaken by a strong wind. 14 The sky disappeared like a scroll being rolled up, and every mountain and island was moved from its place. Revelation 6.12-14 CEB​

In the first passage, Mark 13, Jesus is on the Mount of Olives and is answering a question about when the destruction of the Temple will take place. Many people in this first approach will take these passages to be about the end of the world. In other words, by describing the destruction of Jerusalem primarily, Jesus takes the opportunity to also describe a sort of futuristic cosmic destruction.

In the Revelation passage, then, we have a correlative text that describes the very thing Jesus had in mind during his ministry: a future tribulation with an eventual cosmic climax that ends in the destruction of this world through judgement.

In one sense, rapture predictors and ‘futurists’ or dispensationalists share something in common: these are passages aimed at a future sort of chaos in the world. Fortunately, most people in this camp do not distort things like conspiracy theorists do.

​Then we come to a second approach, admittedly, my own (as I’ve learned from several scholars). By noticing the way that apocalyptic language of this sort functions in the Hebrew Scriptures, we see a pattern emerge: hyperbole. Jewish Scripture utilizes exaggerated language to emphasize a real-world shift or judgement that is or is about to take place.

In Isaiah 13, for instance, we get very similar language to the above passages. In fact, we even (conveniently) get language about a ‘cosmic’ woman who is giving birth, like we saw cited by David Meade in Revelation 12. By verse 17 of Isaiah 13 we discover that the various rhetorical devices that are used (stars, sun and moon not giving light, land destroyed, earth shaken, etc.) point to what God will allow the Medes (no, not “Meades, haha… but prophecy… haha… ok, seriously) to destroy Babylon. Cosmic language has a point: something dramatic–and often political–is about to happen. It will be earth-shattering!

We have other examples, like in Isaiah 34, which uses cosmic language to describe something that we know actually happened: the fall of Edom.

Both of our ‘cosmic doom’ passages in the Hebrew Bible have already been fulfilled within history. But what of the New Testament passages?

In short, both of them have seen their fulfillment as well. They both speak to massive political and experiential shifts.

Mark 13 has Jesus utilizing cosmic language to speak of the earth shattering nature of what it will be like when the Romans come in and destroy the Temple and the City. This happened in 70 CE. Jesus words about the end of the center of Jewish identify and worship do in fact come true within the generation of his hearers.

In Revelation, the rhetoric isn’t focused on the Temple (since it had already been destroyed by the Romans about 25 years earlier). But it is using the same sort of language to describe the radical nature of God’s fight against evil, specifically a new Babylon: Rome (Rev. 17 makes this clear). Like the old Babylon, this reemergence of the Beast (city), will too fall under God’s judgement.

How we, as Christians, talk about apocalyptic language matters. Is God’s future for the world doom-and-gloom or is it more like fresh gardens in bloom? I think Revelation is a book about hope, a costly hope, but hope indeed. This world will be made right. Evil will be purged. Humans will be resurrected. Creation will be renewed. It will be like a City coming down from heaven. It will be great. But, we can’t predict it by decoding the Bible or looking to the cosmos for signs.

David Meade will be wrong on April 23rd. If I am wrong, perhaps I will be writing a different kind of reflection on April 24th. ​ 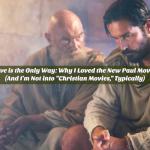 April 3, 2018
Love is the Only Way: Why I Loved the New Paul Movie (And I'm Not into "Christian Movies," Typically)
Next Post 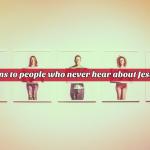 April 26, 2018 What happens to people who never hear about Jesus? (4 Views)
Recent Comments
2 Comments | Leave a Comment
"Message needs to be heard everyday! Going thru some older emails.lol"
Douglas McCall Jesus’ Radical Kingdom Reformation within Judaism ..."
"I am a seminary student and I do not see concrete proof in a Rapture. ..."
Sagacious0ne Why the Rapture isn’t Biblical… And ..."
"Good luck on trying to politely tell those who favor Patriarchy or complementarianism that you ..."
esbee Mutuality in the Church for the ..."
"yup, have you ever heard a Hungarian pronounce Gyorgi? George is WAY easier. I've never ..."
RMS Name Change Myth: Saul Never Became ..."
Browse Our Archives
get the latest from
Progressive Christian
Sign up for our newsletter
POPULAR AT PATHEOS Progressive Christian
1

Sapphira is a model of 'complementarian...
slacktivist