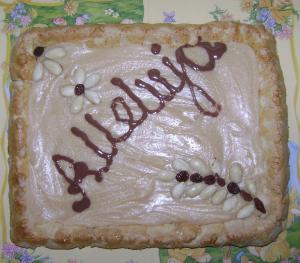 I have observed over the years that however grand and glorious the celebration of Easter may be, with all choirs on deck, the trumpets blazing, the organ pulling out all of its stops, the sermon of the progressive pastor is a bit of a mine field. Nearly all of the regular attendees will be there, of course, joined by that mysterious bunch who like lemmings to the sea find their ways to the sanctuary on this candy-strewn, bunny rabbit day. Exactly what anyone expects to hear from the preacher is frankly anyone’s guess. Do they long for the corpse resuscitation word, wherein for the first and only time in history a human being, namely Jesus of Nazareth, has flown out of the grip of death and has joined God in the heavenly mansions? Did this all actually happen in what we know as history? And if it did, then may we expect a similar flight path if we believe… something? Something like faith in Jesus’ actual victory over death or faith that he has triumphed and is alive in order that we may triumph and gain eternal life? Is that the hope of Easter? And if it is not that, then what in the world, or elsewhere, is it?

I have little doubt that something like the historical reality of Jesus’ resurrection is what more than a few have come to hear, despite their lingering doubts about their ability actually to believe it in the context of their scientific lives. Nevertheless, they imagine, if the preacher says it, then it may at least be plausible to accept the astonishing “fact” that Jesus did conquer death, and because he did, I, too, may find my way to some sort of eternal life. I may not expect an eternity of golf’s fairways, where I am finally a scratch player, or a marbled mansion, studded with golden harps, or a vast picnic with all my departed family, replete with all the fried chicken and potato salad one may consume, but the certainty that death will not be my final end is what I hope to hear, however that blissful state may be construed.

And then there are those, no small number of regular and irregular attendees, who doubt the whole thing, and are more than anxious to hear the preacher poo-poo the entire ridiculous tale as the myth that it surely is. Surely, no one in their right mind, in the 21stcentury, could possibly swallow the narrative that any human being actually sprang out of that tomb, showed himself to several astonished disciples, and proceeded to ascend to the skies, bidding his faithful believers to follow him there in their own time. They want confirmation that their rejection of all this as history is not only a good and decent thing, but is in fact the only rational approach that a progressive Christian may take. They look with some pity on their fellow worshippers who have not followed them in this way, but remain stuck in the fairy tale that continues to burden their modern minds. 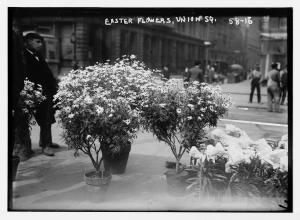 Hence, the preacher’s mine field on Easter Sunday! What is a faithful preacher to do? Let me suggest several ideas that any progressive preacher must address before ascending the pulpit on this special day.

1) Be true to what you believe about all this, and do not succumb to the siren song of “tell them what they want to hear.” The latter temptation is terrible for several reasons. You do not know what they want, as my previous paragraphs have attempted to say. To “give them what they want” may be to deny what you sincerely believe, and that is what we call hypocrisy, or more flatly lying. If you cannot preach what you have been led to believe by the God who called you, then you should find another line of work. How many funeral sermons have I heard that quite plainly lied in the face of those who grieve, imagining that by saying “words of comfort,” the preacher was doing what she was called to do. In many of these cases, I knew well what the preacher thought about life and death, and it did not resemble much of what poured out of their mouths at the funeral. Be true to what your study and prayer and reflection have led you to believe. That is basic.

2)  Do not “talk down” to your hearers, offering to them the “good old way” of some distant past, nor “talk up” to them, obfuscating the story with lofty intellectualisms so as to attempt to hide from them what you have determined about the day of resurrection. Be plain and direct, as I assume you try to be each Sunday.

3)  Take loving refuge in the story itself. In my judgment, the authors of the four gospels never intended for their readers/hearers to take what they wrote in any sort of literal way. The event of the resurrection was far too grand, far too mysterious, to be limited to a literal rendering. Each expressed that mystery in his own way, from Mark’s terrified women, to Matthew’s Cecil B DeMille earthquake and fainting guards, to Luke’s “idle tale,” rejected by Peter, to John’s loving gardener who turns out to be Jesus. It is the story that makes the claim; it is the story that holds the promise of new life and hope. “Jesus has been raised into the kerygma,” announced Rudolf Bultmann nearly 100 years ago, putting in his own unique way the truth that the story of Jesus’ resurrection has become the bedrock of the teaching of the New Testament. Note, I did not say the actual historical event of the resurrection is the center of the gospel, but the story of that event.

What Easter asks of all of us is to exchange our story of death and anger and hatred and division, our tale of rejected immigrants, ostracized LGBTQIA siblings, vast disparities between rich and poor, denial of basic rights to those different from us, denial of the obviously eroding planet, for the story of the resurrection of Jesus, that tale that announces that death is not the final word, that life can be hopeful and rich and fulfilling, that love triumphs in the end. Frederick Buechner’s Godric says it beautifully: “All the death there is, set next to life, would scarcely fill a cup.” And that is Easter. It may seem too fragile a thread to hang a life on, the “mere” story, but it is what we have been given, and it finally is enough for those willing to hear it in all its power and wonder. 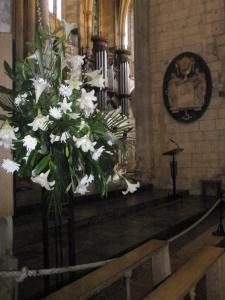