Ex 32 is truly one of the great story chapters in our Bible. The so-called “story of the golden calf” is far more than that as this brief look hopes to show. Perhaps the first thing to note is that no preacher of this material can stop at vs 14. That would be like reading only the first half of a rich novel. In fact, the entire story, begun at chapter 32, does not really end until chapter 34. But we must make some painful choices if we are not to go on all day.

The skill of the writer of this material is unmatched in the ancient world. The details of the text offer a wonderful series of human and divine insights, all of which could serve as basis for a boatload of sermons. Still, one must choose! Hence, this reading will focus on the leadership of Moses and the failures of Aaron to lead. We will be looking for a model of genuine leadership in this chapter.

In Ex 24 Moses announces to Aaron (his brother in some places in the tradition though not in others) that he, Moses, is about to ascend the spooky mountain of Sinai to converse with YHWH. He deputizes Aaron to deal with any problems should any arise while he is away. Moses no sooner disappears into the mists of the mountain, when a problem arises. The people at the mountain’s base, upon seeing Moses vanish, immediately “mob against” (the more appropriate reading of the verb in Ex 32:1) Aaron and start shouting demands. “Come on! Make us gods who will go before us; as for this Moses, the man who brought us up out of the land of Egypt, we do not know what is with him!” That latter translation may sound like 21st century slang, but it in fact is one way the ancient text can be read.

Now we might expect Aaron to respond to the enraged and anxious people’s request in the way that a deputized leader ought respond. Have they not just broken the first the Ten Commandments, the one that reads, “I, YHWH, am your God who brought you up from the land of Egypt, out of the house of slavery,” by claiming that it was Moses “who brought them out of Egypt” and by demanding some new gods to replace YHWH. Astonishingly, Aaron proceeds to break the 2nd Commandment, joining in the fun, I suppose, of rule shattering.

He demands their gold, that gold given to them by the Egyptians as they marched out of Egypt, and carefully shapes a molten calf. The people take one look at the shiny thing and announce, “These are your gods, O Israel, who brought you up from the land of Egypt” (Ex 32:4). (I cannot resist sharing with you one of Frederick Buechner’s great lines about this scene. He says, and I paraphrase slightly, that the people of Israel know what we all know; a god in the hand is worth two in the bush! Go on; you can use that sometime, I am sure—but give credit!)

Aaron, perhaps seeing the chaos he has unleashed, tries to save things by proclaiming, “Let there be a feast to YHWH tomorrow! (Ex 32:5). Dutifully, the people get up early in morning and perform the rudiments of Hebrew worship, offering both whole burnt and peace offerings to YHWH. And then in a time-honored way, they partake of dinner on the grounds, though I doubt they had fried chicken and potato salad. But what they then do is not for delicate ears. 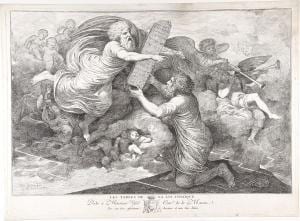 “And the people sat down to eat and drink, and rose up to revel” (Ex 32:7). Or so reads the NRSV. The older RSV read the last verb “play.” Neither quite gets to the meaning, I think. The word comes from the Hebrew root for “laughter,” most famously in the child born to the prune-faced Abraham and Sarah, whom we know as Isaac. In that Genesis story, the laughter represented by the miraculous child is surely joy and gladness. However, in another Genesis story, this word presents a very different flavor. In Gen 26, that same Isaac, now grown up and married to Rebekah, pays a visit to the land of Gerar and its king Abimelech. He, like his father before him, lies about his wife to the king, claiming that she is really his sister. The king in all innocence adds the comely Rebekah to his harem. But one day the king is gazing out of his window and spies Isaac and Rebekah “fondling” one another, as the NRSV has it (Gen 26:8). That verb is the same verb used to describe the actions of the people after they have worshipped and had their post-worship lunch at the base of Sinai. “Play” clearly is not right, and “revel” is a bit better, but what they are doing with one another ought perhaps not be further defined! Fondling on steroids? I leave the picture to you and your own mind.

The scene shifts to the top of the mountain, and YHWH is revealed to be furious, demanding Moses to descend the mountain, tell those Israelite scum that they are blasphemers and liars, no better than the stiff-necked pharaoh whom YHWH has earlier vanquished. And then YHWH says something truly terrifying: “Now let me alone, so that my anger may burn hot against them and I may consume them; but of you I will make a great nation” (Ex 32:10). YHWH has determined to “swallow” the people and then repeats precisely the phrase that YHWH first uttered to Abram in Gen 12:2. It is now Moses who is promised to be the founder of a great nation, free from the wretched Israelite refugees at last.

One might have expected Moses to say something like, “Whatever you say, boss,” or perhaps “Great idea, YHWH; I can’t stand these clowns either and you and I are well rid of them!” But he does not. He in fact saves them all with some quite incredible arguments and demands for YHWH. They are: first, the Egyptians will think you are an idiot, bringing Israel out only to kill them at the mountain; second, calm down, now, and don’t bring evil on your own people; third, do not forget that covenant you swore with Abraham, Isaac, and Israel to gain an inheritance from you forever (Ex 32:11-13). And “YHWH changed the divine mind about the evil planned for the people” (Ex 32:14).

Thus, the people still “fondling” away at the base of the mountain, Moses takes the Commandments down to them. But the sight of the fondling is apparently too much for the old boy, because he smashes the tablets and demands an accounting of the mess from his deputy, Aaron. And now comes the question of leadership. “What did this people do to you that you have brought on them a great sin?” asks Moses, and Aaron proceeds to lie wantonly and unforgettably. He says, and I paraphrase, “Cool off, Moses! Who better than you know just how trashy these people are. They wanted some new gods—can you believe it?—and so I casually asked if anybody happened to have any gold, and they brought it to me. So I tossed it all in the fire, and lo and behold out popped this calf!” (Ex 32:22-24)

Aaron hates the people and washes his filthy hands of them. In response Moses heads back up the mountain to plead—again—for their very lives. He asks for God’s forgiveness of them, but says—in one of the Bible’s great phrases—but if you will not forgive, “then blot me out of the book you have written” (Ex 32:32). This could mean two things. Either Moses refuses to live in a world where YHWH will not forgive even grave sins like this or Moses is here offering his own life for the sinful people. Perhaps both meanings are to be found here. In any case, real leaders are willing to give themselves for the people, even when YHWH appears to have rejected them. Little wonder that Moses is still remembered as Israel’s great leader and lawgiver. And Aaron? Well, he is still represented in all of us who try to have it both ways—worship YHWH and worship other gods? And when we are confronted with weakness and sin too often we try to escape and take no part of the blame. I fear that Aaron is alive and well and living in us. Would that Moses would appear in us far more often than he does! 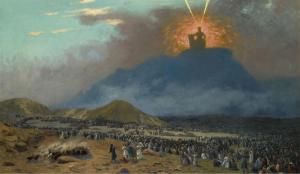