Staff at Hacienda HealthCare in Phoenix realized something was wrong with the patient when they heard her making noise.

“From what I’ve been told she was moaning. And they didn’t know what was wrong with her,” the woman said.

The source said a nearby nurse delivered the baby, noting the baby was healthy.

How Did She Get Pregnant?

It’s good that the baby is healthy but how did she get pregnant? The Daily News explains:

After a near-drowning incident, the woman was left in an unresponsive state and needed constant care, which is why the Dec. 29 birth prompted a sex assault investigation.

The patient wouldn’t have been able to consent to sex or defend herself from sexual assault — and couldn’t even vocalize she was pregnant.

The Arizona Coalition to End Sexual and Domestic Violence spokesperson Tasha Menaker is “horrified” by the allegations and worries there could be more alleged victims.

“In sexual assault cases, it’s not uncommon that perpetrators have multiple victims and so that would be a concern for us,” she said.

As this patient was in a center with many in a vegetative state, the number of those who were victimized could be very high but hard to prove.

We can’t know how long she was in labor, and thus in pain, before someone noticed.

Letting the disabled be sexually assaulted is a grave affront to human dignity. Fortunately, bringing cases like this to the light should help change the situation that many of these people live in. Just like the unborn, these people can’t advocate for themselves so need us to advocate for them. People in situations like this are facing possible euthanasia, but also possible sexual or physical assault. If we believe in the dignity of each person, we’ll work protect the dignity of the disabled like this woman. 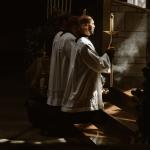 January 5, 2019
Seminarian: Why I Want to Be a Priest Despite the Crisis
Next Post 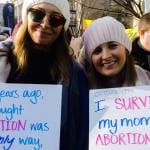 January 18, 2019 14 Mind-Blowing Signs at March for Life 2019
Browse Our Archives
get the latest updates from
Through Catholic Lenses
and the Patheos
Catholic
Channel
POPULAR AT PATHEOS Catholic
1