Patron Saint of the Internet? Carlo Acutis to Be Beatified

Ven. Carlo Acutis is the ideal candidate for the patron saint of the internet. He created a database of Eucharistic miracles on a website so people could find out about them all while he was still a teenager. If you’ve seen a traveling exhibit with displays on different Eucharistic miracles, this is based right off his site.

On Friday, Pope Francis approved a miracle in his case and this allows beatification to be scheduled. As he is the first saint to have extensively used the internet and the first saint who is most known for something he did online, I want to propose him as the patron saint of the Internet.

The Miracle for the Beatification

This morning’s press bulletin for the Vatican read (my translation from Italian):

Yesterday, February 21, 2020, the Holy Father Francis received His Most Reverend Eminence Cardinal Angelo Becciu, Prefect of the Congregation for the Causes of Saints. During the audience, the Supreme Pontiff authorized the same Congregation to promulgate the Decrees concerning: […] the miracle, attributed to the intercession of the Venerable Servant of God Carlo Acutis, Lay; born on May 3, 1991 in London (England) and died on October 12, 2006 in Monza (Italy).

Nicola Gori, the postulator (one in charge of moving the canonization forward), posted the following note on the website pushing for his canonization: “We look forward to knowing the date of his next beatification. We thank the Lord for doing wonders.”

Aleteia reported a few months back when this miracle was in the process of approval, “The miracle regards the healing of a gravely ill boy in Brazil.”

Although incorrupt bodies are not a sure sign of holiness, they definitely point to it. In that regard, Fr. Marcelo Tenorio, the vice-postulator, stated, “Dear ones, I received today from the mother of Carlo Acutis the wonderful news that the body of the venerable youth, who died giving his life for Pope Benedict XVI, is INTACT.” They also noted that given the time and modern methods of caring for bodies, it was too early to declare Acutis incorrupt.

Aleteia gives a summary of his life:

When we hear about a very young person who has been canonized—such as St. Dominic Savio or Blessed Imelda Lambertini—it’s tempting to think that such exceptional and radiant holiness must be a thing of the distant past. Yet there is no reason that a young person today cannot follow in the footsteps of Christ just as closely. […]

Carlo was born in London on May 3, 1991, to Italian parents who moved the family to Milan when he was 3 months old. It was there that Carlo grew up, attending local schools and then a Jesuit high school. Devoted to Our Lady from a young age, Carlo made the effort to recite the Rosary daily and, after his first Communion at age 7, also strove to receive the Eucharist daily and to attend confession weekly. […]

One of his most significant computer ventures was cataloguing all the Eucharistic miracles of the world. He started the project when he was 11 years old and wrote at the time, “The more Eucharist we receive, the more we will become like Jesus, so that on this earth we will have a foretaste of Heaven.” He then asked his parents to start taking him to all the places of the Eucharistic miracles, and two and half years later the project was completed.

Acutis researched over “136 Eucharistic miracles that occurred over the centuries in different countries around the world, and have been acknowledged by the Church” and collected them into a virtual museum.

Antonia [his mother] recalls clearly that “shortly before his death, Carlo offered his sufferings for the Pope [Benedict XVI] and the Church.  Surely the heroism with which he faced his illness and death has convinced many that he was truly somebody special.  When the doctor that was treating him asked him if he was suffering a lot, Carlo answered: ‘There are people who suffer much more than me!”

In Christus Vivit, Pope Francis mentioned Carlo as a model for young people:

Carlo was well aware that the whole apparatus of communications, advertising and social networking can be used to lull us, to make us addicted to consumerism and buying the latest thing on the market, obsessed with our free time, caught up in negativity. Yet he knew how to use the new communications technology to transmit the Gospel, to communicate values and beauty.

Carlo didn’t fall into the trap. He saw that many young people, wanting to be different, really end up being like everyone else, running after whatever the powerful set before them with the mechanisms of consumerism and distraction. In this way they do not bring forth the gifts the Lord has given them; they do not offer the world those unique personal talents that God has given to each of them. As a result, Carlo said, “everyone is born as an original, but many people end up dying as photocopies”. Don’t let that happen to you!

I think these words stand on their own.

A Patron Saint of the Internet

As the internet has become more and more a part of everyday life, several proposals have come about for a patron saint of the Internet. Since the late 1990s, there have been proposals to declare that St. Isadore of Seville is the Patron saint of the Internet. (I found various reports about considering him over the years.) St. Isadore wrote what was essentially the first encyclopedia so thinking of the internet as a huge collection of knowledge, he makes sense as a patron. As far as I could see, there has been no significant movement for other pre-internet saints to be the patron of the internet.

However, Ven. Carlo makes far more sense as he similarly collected knowledge but he did so on the internet. He shows us how to use the Internet in a holy way when so many use it in contrary ways. Instead of bullying or looking for inappropriate things, he used his knowledge of this technology to share Jesus with others.

So let’s hope that Ven. Carlo Acutis is a model both for young people and for all of us online. Let’s ask the Vatican to declare him the patron of the Internet once he is beatified. Let’s also ask his intercession for another miracle so in a few years we can say, “St. Carlo Acutis, pray for us.”

Appendix: Official prayer asking for the Canonisation of the Ven. Carlo Acutis

Oh Father,
who has given us the ardent testimony,
of the young Venerable Carlo Acutis,
who made the Eucharist the core of his life
and the strength of his daily commitments
so that everybody may love You above all else,
let him soon be
counted among the Blessed and the Saints in Your Church.

Confirm my faith,
norture my hope,
strengthen my charity,
in the image of young Carlo
who, growing in these virtues,
now lives with You.
Grant me the grace that I need …

I trust in You, Father,
and your Beloved Son Jesus,
in the Virgin Mary, our Dearest Mother,
and in the intervention of Your Ven. Carlo Acutis.

[Conclude with an Our Father, Hail Mary, and Glory Be]

Note: Please sponsor me on Patreon to continue writing posts like this. 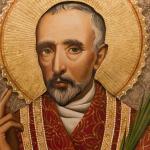 February 27, 2020 Warning: Fr. Tetherow Is Back at an Independent Latin Mass Chapel
Browse Our Archives
Related posts from Through Catholic Lenses