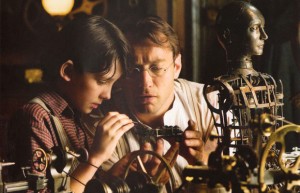 “Hugo,” the first children’s film by famed director Martin Scorsese, is one of the richest, most beautiful, most moving children’s films ever made for adults.

I’ll tell you what I mean.

The cinematography is gorgeous, from the vibrant colors to sweeping vistas of Paris, to the use of 3D that, instead of distracting or giving the audience a headache, actually makes the film deeper and richer than anything you’ve seen before.

Starting with Asa Butterfield as Hugo, an orphan who lives in a huge clock tower, the characters draw you in. After his father died, the boy tends to the giant clockworks in a 1930s era train station. He lives by stealing from the merchants that line the thoroughfares and dodges the Station Inspector (Sacha Baron Cohen). By night, he works to repair a mechanical boy his father found in a museum. The automoton is the last link he has with his father.

One merchant from which he steals, a toy peddler named Georges Melies (Ben Kingsley), has a secret of his own. He mourns a past he loved. When his goddaughter (Chloe Grace Mortez) befriends Hugo, a mystery unfolds that might lead to restoration for all of them.

It’s based on the book by Brian Selznick.

Rated PG for peril, mild thematic material, and smoking, the story is gentle, staying away from bad language, crass humor, or wink-wink jokes. While some characters are villainish, they all are sympathetic and human, a lovely feat in a childrens’ movie.

Because the past that holds their mystery is closely related to the earliest days of filmmaking, the movie plays not only as a wildly imaginative tale, but as Scorsese’s lovesong to the art of movie making.

Back in the days when audiences gasped in wonder at the most clumsy effects and flinched in terror at the sight of an onscreen train speeding toward them, a man needed only imagination and determination to make movies. They did it for the love of it, for the love of the stage, and to create something new. Cynicism had not yet infused itself into the genre, but every film was a chance to create awe, to create a transcendent moment.

“Hugo” glories in this, caressing overacted and haltingly edited footage. Hand tinted film and primitive costumes are its playground.

It’s to Scorsese’s credit that this history lesson doesn’t feel overwhelmingly boring. He focuses on the internal lives of the characters and uses the love of film as a backdrop. Yet, it’s the sort of thing that gets movie critics’ knickers in a wad. After all, we’re critics because we love movies, so an hour long homage to 1910s cinema feels like a day at the candy store to us.

I wonder if children will be quite so excited. Those who have read the book will not be disappointed in seeing their imagination brought to life. In Scorsese’s hands, the movie will draw in those who have not read the books into a world of wonder and possibility, if they give it a chance. 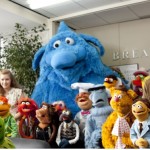 November 22, 2011 "The Muppets," The Dreamers, and Me
Recent Comments
2 Comments | Leave a Comment
Browse Our Archives
get the latest from
Family
Sign up for our newsletter
POPULAR AT PATHEOS Family
1

What Amy Coney Barrett and I Have in...
I don't typically look at Supreme Court nominees and think, Wow, we have...
view all Family blogs
What Are Your Thoughts?leave a comment