“The Muppets,” The Dreamers, and Me 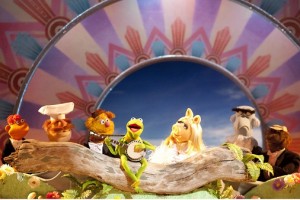 The first question any Gen X’er will ask about the Muppet movie opening today is “Did they ruin it?”

I’m happy to report no. No, they did not.

In fact, Jason Segel, in his years-long crusade to revive the Muppet franchise, has created a movie that entertains delightfully while subtly throwing down a challenge against the hyper-cynical, low-quality entertainment culture in which we find ourselves.

Like a green, gentle Batman, Kermit appears when we most need him.

Segel, the star of “How I Met Your Mother” and “Forgetting Sarah Marshall” seems to have built his Hollywood career solely for the purpose of gaining enough clout to create a Muppet movie.

When Segel wrote the script, he stuck with a storyline familiar to Muppet fans. The old Muppet studios will fall into the hands of the evil tycoon Tex Richman (Chris Cooper) if Kermit doesn’t come up with $10 million. How to do that? Put on the best darn Muppet show they can, of course.

The problem? Everyone has forgotten about the Muppets and the fuzzy performers have scattered. Echoing and sequelling 1979’s “The Muppet Movie,” Kermit finds and gathers his felty horde and sets out for Hollywood. The film introduces Walter, a Muppet raised as a human whose belief in his cloth brethren never falters, even when they lose faith in themselves. With his brother Gary (Segel), and Gary’s long-suffering girlfriend Mary (Amy Adams), Walter inspires the Muppets to rally for one more shot at making people laugh.

The focus, as it should be, is always on the characters. Humor springs organically from their personalities. We laugh with Fozzie Bear because we love him, not because we mock him. If he told actual good jokes, he wouldn’t be Fozzie Bear. The tone of the film hearkens back to the type of humor we had before mockery, shock,  and awkwardness became the main ways Hollywood elicits laughs.

The film keeps Jim Henson’s spirit alive, as well, in several new musical scenes. The opening number, a small town extravaganza of dancing and singing, just makes you want to smile. It’s called “Life’s a Happy Song” and you can hear it here sung by Kermit and composer Bret McKenzie of Flight of the Conchords.

They don’t leave it there, though, combining original music with Muppet wizardry to great effect throughout the film. In “Man or Muppet,” Walter and Gary sing about their identity crisis as the man (or the Muppet) in the mirror backs them up. Kermit’s memories come to life via paintings on the wall in “Pictures in My Head.” And the gang together performs a rendition of “Rainbow Connection” that will leave your eyes misty. Plus, Gonzo’s hens shake their tailfeathers to Cee Lo Green’s “Forget You” and Chris Cooper performs and evil oil baron rap. These pieces are everything that made the Muppets great in the first place.

They don’t stint on the laughs either. All your favorite Muppets crowd into the film and there’s plenty of zany action, especially toward the beginning. A long list of current stars pop up for cameos, including Alan Arkin, Sarah Silverman, Selena Gomez, Neil Patrick Harris, and our old friend Mickey Rooney.

The soul of the movie, however, runs deeper than clucking fowl and exploding fish. “Life’s a Happy Song” is not just a musical number, it’s a mission statement.

In a world of “Hunger Games” and “Ender’s Game” and even “Harry Potter,” popular kids’ culture has become astonishingly dark. Kermit, Segel, and the rest of them are here to proclaim hope for the future. Life isn’t all that bad, they say, all you need is someone to sing along.

The film throws down the gauntlet, as well, at cynical programming that appeals to our worst nature. In the film, the Muppets have been replaced in culture with a show called “Punch Teacher” in which kids, you guessed it, punch their teacher.

“The Muppets” aim to deliver that something and succeed wildly. You absolutely should take your children to this movie.

Rated PG for some rude humor (although I can’t figure out what), the film is refreshingly innocent, clean, and beautiful. There aren’t intensely scary parts, either.

November 25, 2011 Have a Little Faith
Recent Comments
3 Comments | Leave a Comment
Browse Our Archives
get the latest from
Family
Sign up for our newsletter
POPULAR AT PATHEOS Family
1

10 Things Your Husband Wishes You...
The Not So Excellent Wife
Related posts from Tinsel

Analyzing My Ability to Analyze
Just about every choice we make is a cost/benefit analysis. Our brains...
view all Family blogs
What Are Your Thoughts?leave a comment

3 responses to ““The Muppets,” The Dreamers, and Me”