The Rollicking ‘Adventures of Tintin’ 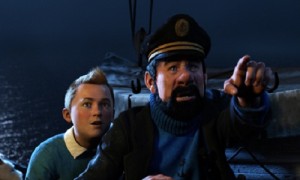 “The Adventures of Tintin” may not be well known in America, but in Europe, they are Bloom County mixed with Calvin and Hobbes and a dash of Superman. Translated into more than 50 languages and selling more than 200 million copies, the comic books penned by Belgian Georges Remi (penname Herge) have helped define the culture.

They’re also quite fun and entertaining, with the intrepid and idealistic boy reporter Tintin constantly going on wild adventures with his dog Snowy and a cast of roundly drawn background characters.

With Steven Spielberg at the helm, the graphic novels have transmorgified into an animated, swashbuckling adventure for kids. With echoes of the adventure of “Indiana Jones,” the entire family will enjoy this film.

When Tintin (Jamie bell) buys a model ship at a market, he little knows that he’s buying an adventure. Soon, thugs come a-knocking, looking for the secret the ship holds. It just might be the key to finding the lost treasure of the seafaring Haddock family. Tintin just can’t let the mystery go. With his trusty dog Snowy, Tintin finds the last Haddock, a sea captain who likes to hit the bottle. Soon, they’re off on a trip that takes them around the world.

Spielberg brings his eye for action to this animated film, capturing the story through motion capture technology, as in “Rise of the Planet of the Apes” or Gollum in “Lord of the Rings.” Indeed, Andy Serkis, the wizard who may win an Oscar for his “Apes” work as Caesar, plays Captain Haddock.

Cinematic wizardry is great, but it’s still about the story. Spielberg doesn’t stint on excitement, serving up flamboyant sword fights, high-flying airplane flights, a fast-paced chase through (and above) Moroccan streets. There’s just enough mystery and just enough action, but it never becomes overwhelming to frighten children. The movie is rated PG for this action. It has no adult-oriented humor or sexuality. Indeed, it has almost no female characters at all. The story does feature a lot of drinking on the part of Captain Haddock, whose breath at one point has a high enough alcohol content to power a failing airplane, which may be a problem for some parents.

The magic of the Tintin comics streams from the richly drawn characters and the background action, which Spielberg faithfully recreates. The foolish detectives Thompson and Thomson, nearly identical, bumble their way through an investigation. Captain Haddock alternates between nobility, blustering aggressiveness, and drunkeness, but is always funny.

The best character, however, is the wordless Snowy, who has little adventures of his own. As in the comics, Snowy discovers things Tintin misses, hears things Tintin doesn’t, and gets into messes that Tintin never notices. Whether it’s chasing a pickpocket or sniffing a camel, Snowy (and with him, the audience) knows things the human characters don’t. Snowy often finds the solution to a problem long before Tintin.

If only he could talk.

It all adds up to a fun and fantastic movie for families this holiday break. I guess this Spielberg guy knows how to make movies. 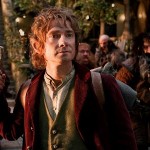 December 21, 2011
Back to Middle-Earth with 'The Hobbit' Trailer
Next Post 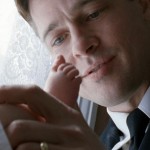 December 22, 2011 Best Movies of 2011
Browse Our Archives
get the latest from
Family
Sign up for our newsletter
POPULAR AT PATHEOS Family
1