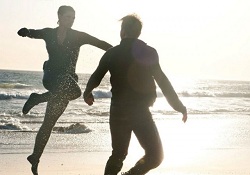 “Haywire,” the sparse, taut action thriller from director Steven Soderbergh, stars a new face: Gina Carano. Although, to perfectly honest, her face is not really the thing that matters in this flick. It’s a pretty face, to be sure, but her fists, thighs, feet, and abs should really get top billing.

Carano is an athlete, a star of Mixed Martial Arts who used to appear on the TV show Gladiators. When she throws a punch, you believe it. When she kicks, you have no doubt the unfortunate man on the other end feels it keenly.

This is pretty much the whole movie, but a true athlete as a female action star is so refreshing, it’s all the movie really needs. As I compared in previous post, the Jolies and Saldanas of the world are fine actors, but their twiggy limbs and frail frames make all that gun-totin’, butt-whompin’, and bad-guy chasing just a little hard to believe.

In “Haywire,” Carano plays Malory, a former Marine that now specializes in the kind of jobs gov 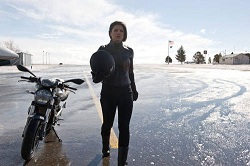 ernments and corporations like to hire out and keep secret. As the key player in her company, she runs a job in Barcelona, rescuing a journalist. After breaking up romantically with the leader of the company, she plans to strike out on her own, but her ex has just one more job for her. When things start to not make sense, Malory finds the Barcelona job was more than it seemed and she must now battle her former colleagues.

The plot, however, is just enough to keep the audience interested as Malory visits punishment on big, beefy male after big, beefy male. Channing Tatum, not a small boy, is the first to receive her wrath. Also in the cast are big names like Michael Douglas, Ewan McGregor, and Antonio Banderas.

Like the other kick-heinie woman in theaters now, Lisbeth Salander of “Dragon Tattoo”, Malory stays one step ahead of her enemies. Unlike Salander, however, she knows Mixed Martial Arts.

Carano’s skills and Soderbergh’s direction pair up nicely. Malory is always at a size disadvantage with her foes, and Soderbergh never asks us to believe a 125 pound female can kick a 175 pound male across the room, as some action flicks would do. Instead, she fights hard and with complete commitment. She uses their own weight and size against them, strangles them in headlocks, leverages herself against walls, and generally convinces us that a well-trained woman with determination can hold her own against men.

That’s hard to do.

Soderbergh zeroes in on action, filming some sequences in near real-time, stripping away stylization. He’s smart enough to know that Carano is the attraction and he doesn’t need fancy footwork in addition to her own. The result is gripping and gritty. The plot, however, never comes into full focus. I left the theater unsure exactly who had plotted what against whom.

The movie satisfies without a coherent plot. It has something to do with that Carano girl.

Rated R, the film has one sex scene, not particularly graphic, some language, and a whole lotta violence. 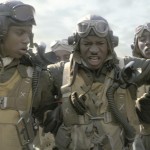 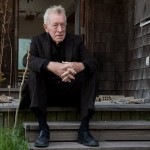 January 20, 2012 Interview: Max von Sydow on 'Extremely Loud & Incredibly Close'
Recent Comments
2 Comments | Leave a Comment
Browse Our Archives
get the latest from
Family
Sign up for our newsletter
POPULAR AT PATHEOS Family
1

The Importance of Positive Reinforcement in Your Relationship
During our couples counseling sessions, Kylie, 48, complains about Justin's, 50, lack...
view all Family blogs
What Are Your Thoughts?leave a comment

2 responses to “In ‘Haywire,’ Kicks and Punches Hit Home”