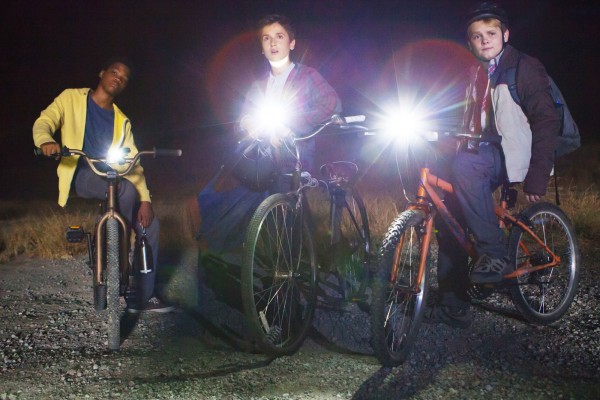 The storyline of Earth to Echo may seem familiar, but don’t let that stop your kids from enjoying this sweet, child-driven adventure.

We don’t see many films with child protagonists, films like Goonies, Stand By Me, Super 8, and yes, E.T.: The Extraterrestrial.

There’s something in common with all these films: First, children lead, not teens, (although teens sometimes play the children). They’re on the verge of adolescence, but they’re still concerned with childish things: Riding bikes, throwing rocks, figuring out mysteries. They’re about friendship and adventure, not coming of age or romance. And they feature kids being kids: hopping on a bike and getting out into the world.

Earth to Echo tells the adventure of three boys on the last night of being friends. Their families are forced to move to make way for a highway development, so the three buddies will be separated. One thing charming about this movie is each boy is a full personality, and none of those personalities are miniature adults, precious sassy-mouths, or quintessential troubled kids in need of fixing.

No. They’re boys, written by Henry Gayden, who must know boys well.

Munch (Reese Hartwig) likes computers and technology, doesn’t like taking risks, and is rule-oriented. He’s balanced by Tuck (played by a former X-Factor contestant who goes by Astro), a breezy and flashy extrovert given to bragging who is also a loyal friend, and Alex (Teo Halm) whose foster-kid background has given him a wait-and-see attitude blended with a street-smart edge. Munch worries, Tuck performs and Alex broods, but not to any degree that makes the children caricatures out of central casting.

Mostly they tool along on their bikes, film each other doing goofy things, and talk confusedly about girls – still foreign territory to them. They’re in the banging-sticks-on-trees phase of boyhood, still drifting from one seemingly senseless activity to another in a dreamy battle against boredom.

The trio resents having to move, but they haven’t yet figured out that there’s something sinister about the government construction crew forcing them to go.

When their cell phones start to act oddly, displaying strange images and fuzzing out at weird times, the boys try to figure out why, more because they have nothing else to do in this Southern California desert town than out of a desire to be heroic.

They decide to investigate and spend the night out in the desert wilderness. They hop on their bikes for the sort of epic all-night shenanigans no parent wants their kids to undertake, but which every adult wishes they’d had before succumbing to the monotony of grownupedness.

That’s where they find a little, lost robot they name Echo, a cross between E.T. and Wall-E. He needs their help but those so-called construction guys are on the trail. 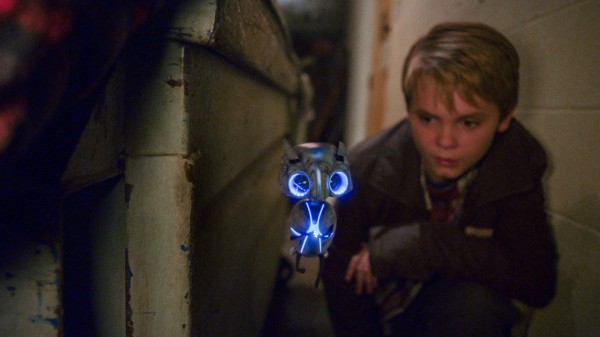 Part way through the proceedings, the boys meet up with another alien creature – a girl named Emma (Ella Wahlestedt). Unfortunately, Emma is drawn more cliche and less fully-rounded than the boys. She’s pretty, sassy, smart, and clever, pretty much without the faults that make the boys so charming and real. As in so many movies, it seems they were afraid to let the girl be a real person.

The other detriment of this film is the style of filming. It’s supposed to be the home footage that is all the rage. Tuck, an amateur filmmaker, records the boys’ adventure with a variety of devices: A camcorder attached to his bike, spy glasses, and the ever-ubiquitous iPhone and iPad. The concept is good, but the filmmakers are too committed to the concept. Many of the shots are shaky and blurry, some even nauseously so. For this concept to work, a filmmaker should set up the home filming trope, imply shots are filmed on devices, and then have pity on the poor viewers and film professionally.

Ain’t nobody got time for shaky shots.

That said, it’s still a good film, especially for boys.

Rated PG, it doesn’t have the edge sometimes found in kids’ flicks. Language is very light, sexuality very light (a cute storyline involves bragging about having kissed a girl), and there’s some mild peril. 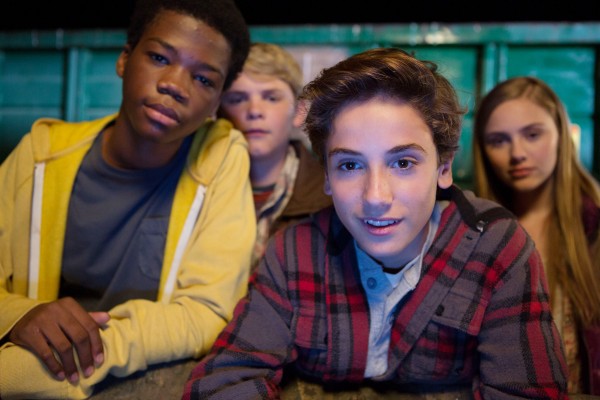 Yes, the film is derivative of E.T. and others like it, but, then again, your kids didn’t see E.T. on the big screen. That movie belongs to today’s adults. We may remember that fantastic movie, and maybe even show it to kids at home, but that doesn’t mean there’s not room for a well-made kid adventure that covers some of the same ground. This movie doesn’t stand up to classics like E.T. and Goonies, but it’s worlds better than a lot of the mindless junk produced for kids.

Most importantly, the film captures the feeling of adventure and friendship that we hope our boys experience before they trade the magic of childhood for the chaos of adolescence. Underneath their faults, the three are good kids. They have the framework to develop into good men.

That’s why I liked this movie a lot and I think your boys will as well. It might even inspire them to hop on a bike with a friend.

July 2, 2014
Deliver Us From Evil - A Refreshingly Thoughtful Crime-Horror Film that Explores the Implications of Evil
Next Post 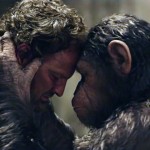 July 11, 2014 Review: 'Dawn of the Planet of the Apes' 2014
Browse Our Archives
get the latest from
Family
Sign up for our newsletter
POPULAR AT PATHEOS Family
1

How Do I Get My Husband to Stop...
Dear Terry, My husband Kyle and I are drifting apart. We’ve been...
view all Family blogs
Copyright 2008-2020, Patheos. All rights reserved.