Let the reader beware:  it’s impossible to discuss this film meaningfully without revealing its ending.  So, full spoilers ahead!

“I first tasted semen when I was seven years old.”  From its opening line, Calvary seizes the viewers’ full attention, and this grasp doesn’t relent until the denouement runs its full course through the closing credits.  Writer and director John Michael McDonagh most certainly knows how to tell a good (albeit flawed) story, though I vehemently disagree with the heart of his allegory.

Calvary commences with a masterful long take.  For the first few minutes, we only observe Father James (Brendan Gleeson, splendidly watchable as always) and his reactions to the man in the confession booth.  This unseen “confessor” recounts five years of relentless rape by a now-dead priest, and he caps his horrific narrative by proclaiming that seven days from now, he’ll murder Father James.

In the week that follows, we observe James conducting his priestly duties in a postcard-lovely shoreline village in County Sligo, Ireland.  His daughter Fiona (James was married and widowed prior to taking his vows) comes for a visit, fresh from a failed relationship and suicide attempt.  Aside from her arrival, James largely treats this like any other week on the job, until his climactic showdown with his aspiring killer.

Calvary, a joint UK-Ireland film venture, convincingly depicts a nation traumatized by the scandals that have rocked the Roman Catholic Church.  The village constable matter-of-factly tells Father James of his relocation to this backwater after attempting to prosecute a pedophile priest in Dublin.  In another scene, as Father James strolls down a lane with a girl tourist, their innocuous chat is startlingly interrupted when her dad brusquely and furiously yanks the girl far away from this supposed predator.

While the film succeeds on this nationally symbolic level, it struggles mightily on the smaller individual scale.  Writer/director McDonagh evidently couldn’t choose decisively among three characterization options, which results in jarring dissonance.  At Calvary’s outset, he playfully portrays the villagers in an “oh those quirky rural folk” mode.  This works at times, but fails elsewhere, as with the gratingly stereotypical gay hustler whom we first meet leaving the constable’s house after a quickie.

In the middle portion of the film, we’re treated to caricature.  In the style of a morality play, each villager solely represents his or her particular vice, whether a housewife’s adultery or a financier’s insatiable greed.  And of course, the two most overtly anti-religious folks are subpar specimens of humanity:  we have a callous physician (self-announced as “one part humanist, nine parts gallows humor,” in case we have any doubt about his shabby moral outlook) and a constable who can’t be bothered to leave the pub and carry out his investigatory duty when the church literally burns to the ground.

In the much more satisfying final act, McDonagh chooses to flesh out his supporting characters.  The businessman, for instance, is shown to have a heart, even if it is two sizes too small.  And Father James’ killer has some breadth to him in Calvary’s closing moments.

Despite these inconsistencies, the movie still manages to be above-average filmcraft.  McDonagh artfully frames his images, whether the torched church blazing in the night or the climactic killing of the priest as witnessed by an altar boy.  And despite a few clunky formulaic lines, many more bits of dialogue crackle with wit and invention.  I found decent food for thought in Calvary’s discussion of philanthropy as an attempt to expiate guilt and the notion that most people’s faith rests in the shallow soil of fear of death. 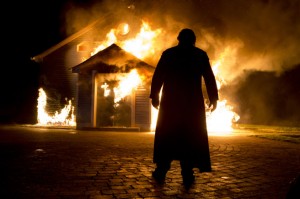 My biggest problem with the film comes (merely!) with its core premise.  As the title signifies, Calvary functions primarily as an allegory of Christ’s martyrdom.  The Roman Catholic Church has sinned mightily, and a spotless lamb is required to die and take away its sin (the script repeatedly reminds us that Father James has done no wrong).  In the aftermath of such a deed, the Church can undistractedly resume its service to Ireland.

The film makes plain that Ireland desperately needs its priests.  At its hamfisted worst, the cardboard cutout villainy of the villagers attempts to plead this case.  More subtly, we’re shown that every character has murder in his or her heart, whether the self-slaughter of James’ daughter, the assaultive rage of the wife-beater and the Buddhist bartender, the longed-for assisted suicide of the elderly American expatriate, or the bloodlust of the dull-witted chap enlisting in the military.  The village thus needs a spiritual counselor of integrity to guide it through treacherous ethical shoals.

In my 40-odd years on Earth, I’ve learned that we humans possess a more nuanced mix of light and darkness than Calvary and Christian theology allow.  And the way to banish the darkness has nothing to do with barbaric Bronze Age notions of scapegoating.  If the Church wants to aid those it has grievously harmed, I recommend instead the newfangled notions of speaking the unvarnished truth, beseeching forgiveness, and making amends. 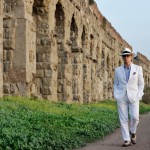 August 28, 2014 The Zero Theorem (dir. Terry Gilliam)
Browse Our Archives
get the latest from
Family
Sign up for our newsletter
POPULAR AT PATHEOS Family
1