When God Renames Us

To follow up on my post from two weeks ago in which I contended that the phrase “just a sinner saved by grace” proves futile and untrue, I thought I might elaborate a little more. A few commenters accused me of heresy–that’s always fun–but it is worth it to me to flesh this out since understanding who we are in Christ deeply influences how we relate to God. That’s no minor, peripheral issue.

Even as I said very plainly that God’s grace grants us no permission to do wrong but that it empowers us to live in freedom, some seemed to think that I was claiming to be without sin and were quick to direct me to 1 John 1:8. That verse reads: “If we claim to be without sin, we deceive ourselves and the truth is not in us.”

Why is it that we think that however much we may sin we still need to call ourselves “sinners”? I am not trying to play a semantics game here, but there is something very crucial that we must realize. I have never heard a Christian who battles overeating, for example, say that he is “just a glutton saved by grace”. If we do not call ourselves after sin in a specific sense, what is the point of doing so in a general sense? Maybe to make an excuse? We are not to identify ourselves with what died on the cross, but with the newness of life Jesus purchased for us at the cross. When we do that, the most carnal and pleasurable of sins lose their appeal. We bring Jesus glory for what he did at Calvary when we live in the power of the finished work at Calvary. 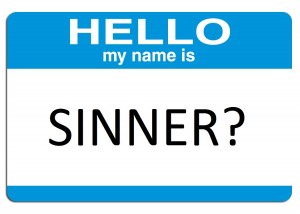 And what’s in a name? Well, everything.

In the Hebrew culture, the culture into which Jesus was born, a name bespoke identity (the name of Jesus means “God saves, God heals”). This is often lost on us in the modern West but a name still tells you who you are. I would also venture that a sizable percentage of parents in Western nations still look up the meaning of a name when trying to decide what to call their new son or daughter. No dad and mom who have a smidgen of affection for their child would dream of picking the name “Sinner”, though I have known a few to choose “Grace”.

Faithful Christians do indeed struggle against all kinds of sin and the author of 1 John is absolutely right. We are not without it, and the truth is not in us if we pretend otherwise. But the heart of God is for our good and that we overcome sin, not name ourselves after it, languish and despair in it, defeated by unhealthy vices for years on end until death. And while we were (check out that past tense) yet sinners, Christ died for us.

And even while we were sinners, and we most definitely were, Jesus does not call us as such. He did not label the Samaritan woman at the well a sinner/whore even as he did tell her that the sixth man she was sleeping with was not her husband. He was not endorsing her wanton sexual habits and he was not even supposed to speak with her at all. Instead, he defied all the social conventions of the day and pointed her to the source of life, to the living Water, to himself. He effectually renamed her. The town harlot became the town evangelist.

God calls us after who we are becoming, not after what we have done and it just does not jive with our heavenly father for destructive addictions and sinful habits to rule and eat away at our lives. He is a good dad who is not afraid of the painful emotional hurdles we may encounter en route to restoration for it does require real courage on our part to engage and push past those things. Seldom does anyone willingly indulge in sin simply for the sake of sin itself. If there were no pleasure in it no one would do it, and usually the pursuit of that pleasure is done to escape, however temporarily, gnarly afflictions, lousy circumstances, or violations of love that precipitated the sin in the first place. The Father knows us in our hurts and wounds. That’s usually the place where He first finds many of us.

And might I add that it would have been wholly inappropriate (and ridiculous) for Jacob to insist on his old name after God called him Israel. Similarly, Scripture does not tell us if Benjamin ever found out what his mother called him as she died in childbirth, but perchance he did know can you imagine the scandal if he told his father that he preferred to be called Ben-Oni? Why be named “son of my struggle” when his father called him “son of my right hand”? When Father renames us, it’s always better.

Furthermore, the book of Acts does not describe the exact circumstances when Saul the persecutor became Paul the apostle but when it first notes his name change (Acts 13:9) the text says “he was filled with the Holy Spirit”. When his name was officially changed, when he had a new identity, he was full of the power of GOD! His new name, which means “humble”–no coincidence there whatsoever–marked a profound shift in the course of his life. A former terrorist was transferred from an earthly kingdom where one kills to preserve religious purity to another Kingdom where the most profane, undeserving rebels receive mercy and healing, and he was one such unworthy recipient. Father has a knack for turning the worst of sinners into the most sanctified of saints.

He remains in the business of renaming us and it is injurious to Him when we continue identifying ourselves with the sin he bore for us. If indeed the power of sin has been destroyed, we have absolutely no right to adopt it as an identity. “I’m just a sinner saved by grace” may flow off our tongues a little easier than “I’m a new creation in Christ Jesus” (who, yes, is still in process) but the latter is what He has actually said.

I think I’ll stick with Dad. 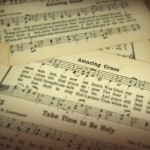 January 15, 2016
Our Hymnology Is Usually Better Than Our Theology
Next Post 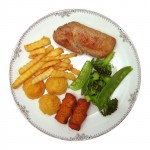 February 3, 2016 Bridging the Food, Knowledge, and Identity Gaps
Recent Comments
0 | Leave a Comment
"Brandon, All of this paradox and "divine mystery" vanishes when a naturalistic view is taken ..."
Chuck Johnson Engaging the Tension of the Kingdom
"Very encouraging and worth printing out and looking at frequently!I remember asking the Lord how ..."
Alicia Bradford 5 Beliefs That Produce Hope
"This is phenomenally helpful information."
Beth Raps 5 Beliefs That Produce Hope
"Having and speaking about sexual desire is not sin. I am not going to live ..."
Brandon Showalter I Am Not Entitled to Marriage, ..."
Browse Our Archives
get the latest from
Evangelical
Sign up for our newsletter
POPULAR AT PATHEOS Evangelical
1

What Is Christian Mission without Any...
Roger E. Olson
Related posts from Tip of the Spear