Starting on Sunday, I’m going to be doing a series of six linked posts on how my exploration of mathematics gave me a framework for understanding and discussing absolute morality.  Posts topics will include how to be moral when you don’t have perfect knowledge of morality and the ways God is like a cylinder, and why that’s a problem.

It all kicks off here on Sunday with a post on the superb Flatland: A Romance of Many Dimensions.

Atul Gawande’s piece in The New Yorker on end of life care has been getting well deserved attention across the blogosphere.  It’s worth reading the article in full, but, among the most salient points: many patients live longer if they enter hospice earlier, since agressive chemotherapy that has only a small chance of success is massively debilitating.  From the article:

In ordinary medicine, the goal is to extend life. We’ll sacrifice the quality of your existence now—by performing surgery, providing chemotherapy, putting you in intensive care—for the chance of gaining time later. Hospice deploys nurses, doctors, and social workers to help people with a fatal illness have the fullest possible lives right now… Hospice and palliative-care specialists aren’t much concerned about whether that makes people’s lives longer or shorter.

Like many people, I had believed that hospice care hastens death, because patients forgo hospital treatments and are allowed high-dose narcotics to combat pain. But studies suggest otherwise. In one, researchers followed 4,493 Medicare patients with either terminal cancer or congestive heart failure. They found no difference in survival time between hospice and non-hospice patients with breast cancer, prostate cancer, and colon cancer.

The American approach to death has shifted wildly in the mere 200 years of our existence.  One of my favorite books from my “Epidemics in American Culture” class was Drew Gilpin Faust’s This Republic of Suffering: Death and the American Civil War, which, as the title might imply, had an awful lot to say on this topic.  For the first time in American history, massive numbers of deaths occured outside of the home, in industrial settings.  To compensate for this, nurses sent letters home describing the deaths of soldiers that were often complete fabrications, matching and creating expections.

One final detail on the way our ideas about death have changed: a fascinating post at There I Fixed It chronicles the mid-19th century practice of photographing the dead posed with the living.

Keep in mind that photography in the 19th century was an elaborate process; both time consuming and certainly expensive. For many people this was the only photo that would be taken of them. Typically the deceased are depicted as sleeping following through on the notion of death as permanent state of sleep, but also because generally people died asleep in their beds. 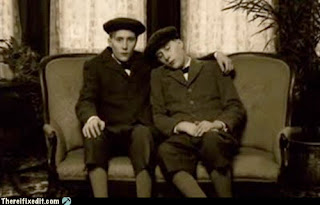 Don’t worry, this isn’t going to be a single issue 7 Things on death, the way last week’s turned out to be entirely on statistics.  Here’s a palate cleanser: things smashing into other things.  In slow motion. (h/t Andrew Sullivan).  I think I like the egg dropped into a mouse trap best.

Remaining on a lighter note, Taylor Marshall offers an informative meditation on the symbolism of the pageantry surrounding the Pope’s visit in a post titled “Popemobile Rides Victorious over Protestant Pedestrian?”

Finally, a hat tip to my friend Dylan who put together a list of his five favorite spiritual arrangements.  I’m delighted to see several Fenno Heath arrangements on his list (and prodigious thanks to Dylan for aquainting me with Heath to begin with).  I loved the recent Yale Glee Club arrangement of “God Has Gone Up with a Triumpant Shout” though I don’t remember who did the arrangements and can’t find a link to it.  If you follow the link above, though, you can hear the stellar recording of YGCs All the Pretty Little Horses, arranged by Jeffrey Douma.

July 28, 2010
"You can't go around building a better world for people"
Next Post

August 1, 2010 "From dreams I proceed to facts"
Recent Comments
1 Comment | Leave a Comment
Browse Our Archives
get the latest from
Catholic
Sign up for our newsletter
POPULAR AT PATHEOS Catholic
1