Credit Where It’s Due 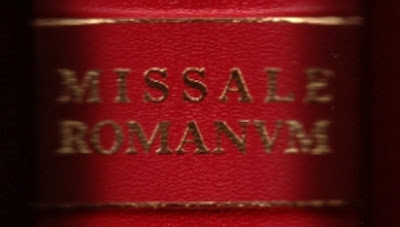 I had a really fun time this week when I attended a lecture/discussion on the new translation of the Roman Missal that’s going into effect next Advent.  (The Vatican approved changes to the Latin form of the Mass about ten years ago, and the English translation has been working its way through the pipeline).  The campus church gave an explanation of the thinking behind the new translation and talked a couple of the most notable changes through in detail.  It was fascinating, and that’s not just the translation-nerd in me talking.

The priest spoke frankly about the difficulties of using precise language while avoiding jargon.  The switch in the Nicene Creed from “one in Being with the Father” to “consubstantial with the Father” drew the most objections from students.  Consubstantial (which is obscure enough to not be recognized by Blogger spellcheck) is very specific, but you need to know a lot of metaphysics and theology to grasp it at all.  “One in Being” might lead laypeople to miss nuances,  but they’d get the general idea.  The students (a mix of undergrads, grad students, and some Div school people) disagreed about how much theological clarity was feasible and how much rigor should be sacrificed for the sake of not alienating parishioners.

In high school and for part of college, my idea of Catholicism (and I suspect that of many others) just transposed the biblical inerrancy and literalist zeal of evangelical hardliners to an unquestioning cult-like devotion to ritual, particularly in the form of the Mass.  At the discussion I attended, I could see I had been wrong.

January 15, 2011 Other Thoughts on Prayer
Recent Comments
1,272 Comments | Leave a Comment
"On that note... I recommend every Catholic and Christian have that post a read. Click ..."
Oktavian Zamoyski Effective Altruism and Caritas [Radio Readings]
"I think too many people have grandiose and unnatural ideas about charity. It becomes a ..."
Oktavian Zamoyski Effective Altruism and Caritas [Radio Readings]
"Jesus wasn’t resurrected as a great miracle simply in order to convince people to believe ..."
John The Two-Lazarus Problem
"The cartoon is amusing, but flawed. One of the four virtues of Stoicism is Justice; ..."
Vulpes Inculta 7QT: Stoicism Man, Semi-Imaginary Money, and ..."
Browse Our Archives
Related posts from Unequally Yoked