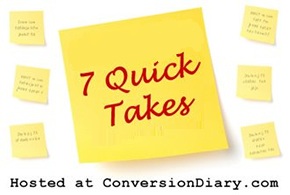 It’s not Friday, but I wanted to share a round-up of my love songs for Valentine’s Day.  The trouble is that all my favorites are by Stephen Sondheim, so they tend to be too snarky, self-aware, or sad to actually sing to someone in a romantic context, so I’m sharing them with you instead.

To give you an idea of the problem, let’s start with a song from Passion, the only musical Stephen Sondheim says he wrote entirely without irony.

Here’s the moment when Giorgio returns Fosca’s love at the end of the show. Sondheim frames love as a desperate, totalizing, all-consuming force.  Most people left the production I saw feeling frightened and sick.

The “Now/Later/Soon” sequence from A Little Night Music is more typically clever and quick.  It also includes what I think of as one of the most recognizably Sondheim lines I know (delivered at a quick, frantic clip):

And you / have to / admit
I’m endearing,
I help / keep things humming,
I’m not / domineering–
What’s one / small shortcoming?
And think of / how I adore you,
Think of / how much you love me.
If I were / perfect for you,
Wouldn’t you / tire of me?

Sondheim is a brilliant satirist of conventional, self-abasing love songs.  In Assassins, he writes a duet for John Hinckley and Squeaky Fromme that matches the style of 1970s ballads.  The two assassins show the same total obsession with the love object still common in songs today, but they take that total selflessness and need to its conclusions when they try to kill the President.  Their intensity is unnerving.

The next song is sweeter sounding, but no less desperate.  “Losing my Mind” from Follies is sung by one of the women in the two unpleasantly enmeshed couples in this musical focused on decay.

I’m a big fan of Anyone Can Whistle, Sondheim’s very flawed, very early still (and I like it a lot better than A Funny Thing Happened on the Way to the Forum).   It’s almost never staged, so “With So Little to Be Sure of” is embedded below for just the audio.

I can’t let a list of love songs go by without including something from Company, Sondheim’s concept musical about marriage.  There are a LOT of classics, but, especially since I just spent an entire post on paradox, I have to single out “Sorry/Grateful.”

Sondheim’s most beautiful love songs do tend to be the ones about being passed by, of being unable to properly connect with other people.  The song below is my favorite of this type, and one of my favorite Sondheim songs ever.  “Finishing the Hat” is from Sunday in the Park with George, a show about pointillist painter George Seurat.  The video below is not as high quality as I’d like (a little buzzy and jumpy) so let me know if you have a better one.

February 15, 2011 Prep for a Case Study in Christian Thought
Recent Comments
1 Comment | Leave a Comment
"Jesus wasn’t resurrected as a great miracle simply in order to convince people to believe ..."
John The Two-Lazarus Problem
"The cartoon is amusing, but flawed. One of the four virtues of Stoicism is Justice; ..."
Vulpes Inculta 7QT: Stoicism Man, Semi-Imaginary Money, and ..."
"Do You Know what isn't Fair? Calling Atheism a Religion. Or saying Dawkins is a ..."
skwills Who Gets to Give the Courtier’s ..."
"Oh! And you can get there via Naval Gazing.(probably not by Navel Gazing...)"
TheSparksFlyUpward Too Sucky To Be True
Browse Our Archives
get the latest from
Catholic
Sign up for our newsletter
POPULAR AT PATHEOS Catholic
1