I’ve almost made it to Spring Break (also known as lock-myself-in-a-room-and-write-my-senior-thesis-for-two-weeks-so-why-the-heck-is-it-called-break?), so I’ll be able to catch up on neglected posts and comments soon.  Today I’ll have a roundup of your comments and my responses to my plea for suggestions for Lenten sacrifices.  If you’ve been waiting to add your two cents, jump in this morning!  After that, I’ll finally be able to jump back into the discussion Alex Knapp, Eli of Rust Belt, and I are having about necessary evil.

Oh, and in case you’ve been wondering what I’ve been up to instead of blogging, my midterms have included discussing why researchers should have used a statistical test instead of eyeballing trend lines, furiously debugging SAS code only to realize I’d just misspelled a variable name, and answering the following question:

Why is the logic of a speech its most moving element?

While I’ve been neglecting my posts, Christian of The Thinking Grounds is making good on his promises.  This week he posted the introduction to his series on the boundaries of the self, which was sparked by a discussion about transhumanism here.  Here’s his goal:

“I do not intend to map out the markers between me and not-me. This is not only because I don’t claim to be an expert but also because I don’t think there are definitive boundaries. My intention is not to offer a comprehensive theory of self. It is instead my goal to destabilize existing theories. If, by the end of this series, you (my reader) think of the self as having fuzzier edges than you’d previously imagined, I will consider myself successful. I will not be doing theology here. What I will be doing is offering a number of examples, mostly real-world, which challenge our preconceived notions of the boundaries of self. Over the course of the posts you will, if all goes well, be able to see the everyday and systemic applications of this question, but in the meantime I hope you will be able to enjoy it as an intellectual exercise. If you are interested in doing some prior reading, I would suggest Alice Domurat Dreger’s One of Us: Conjoined Twins and the Future of Normal and Judith Butler’s Precarious Life, in particular the chapter entitled, “Violence, Mourning, Politics.” My ideas will also be indebted to Donna Haraway’s Cyborg Manifesto, which I have lots of big problems with.”

I recommend you bookmark his index, which will be updated with live links every time he adds an installment.  Though, to be honest, since self/non-self and transhumanism are tremendously compelling linkbait for me, I’ll probably be posting about his series over here and I promise to keep you in the loop.

Oh, and speaking of transhumanist linkbait… Brian Christian’s story in The Atlantic about being a human control in a yearly Turing Test competition is one of my favorite bits of reporting this year.  Brian’s goal is to win the ‘Most Human Human’ award by successfully convincing as many judges as possible that he is human.  To do that, he has to research the ways the computers are best at impersonating humans and where they are weakest.

For me, the most interesting question is how humans should react when computers match us at a particular trait or skill.  Should we think of the computer as becoming more human or should we regard that aspect of ourselves as less essentially human, since it can be imitated?

A really fabulous read.  (h/t to my roommate).

This is only related to what has gone before in that it is also fabulous. 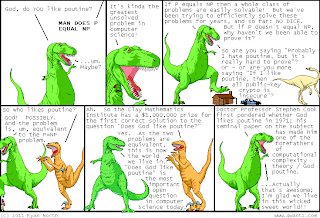 There’s too much text for this resolution, plus you’re missing out on alt-text, so click to Dinosaur Comics to read it in situ.  (And if you read it and are confused, check out this wikipedia article.  Or possibly this one.) 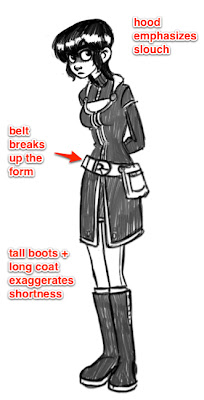 And while I’m on a webcomics kick, I want to recommend Indistinguishable from Magic, the behind the scenes blog of Aaron Diaz – creator of Dresden Codak.  I love reading his posts, which make me pay a lot more attention to graphic design and art.  Try his “Costumes: the Wearable Dialog” for starters.

And for one last piece of brilliant graphic design, check out this ad for a German career search site.  The text reads “Life’s too short for the wrong job.”  You can see all the ads in this series here. 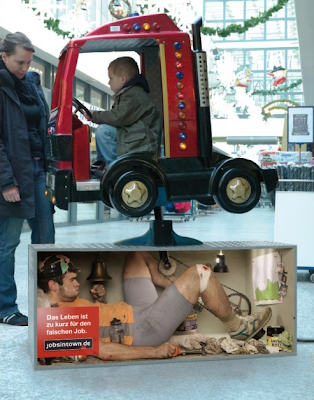 Finally, in other writing/blogging news, I have new articles for the Huffington Post and The Yale Daily News up this week.

[HuffPo]: “To Save the Times, Abandon Timeliness”
Advice for my favorite old media dinosaur

[YDN]: “The Offence of Disengagement”
Translating the philosophy of the martial art Krav Maga into foreign policy.  Sorry for the wretched title, I didn’t pick it!

If you want to follow my non-religious writing, I’ve started a bare-bones tumblr to keep it all in one place.

March 4, 2011 Picking a Lenten Discipline
Recent Comments
1 Comment | Leave a Comment
Browse Our Archives
get the latest from
Catholic
Sign up for our newsletter
POPULAR AT PATHEOS Catholic
1