Last week, I mentioned in my quick takes that I was going to see an ex-gay speaker who came to visit campus.  There’s been a big backlash on campus, so I’ve been posting about my reaction with a news roundup, a brief defense of the speaker, and an example of (perhaps inadvertently) hurtful rhetoric.  Today, the first real defense of the talk came out in The Yale Daily News, so I’m linking it here and I’m adding it to the first news roundup page.

And speaking of the YDN, I don’t always feel a need to link my Friday columns here, but this week is different.  Yale is currently being sued by a group of former and current students under the provisions of Title IX for creating a hostile to women environment by continually mismanaging complaints of sexual assault.  My article gives a little background on the complaint and is focused on the way that many teens and adults don’t understand how to properly obtain consent when trying to begin a sexual relationship.  Several students I know have been taken advantage of even though their partners did not realize they were being abusive.  I hope you’ll read it and if you agree with my concerns, that you’ll share it with any friends who are or are becoming sexually active.

Those first two are more serious/depressing than my quick takes often are, so, to make it up to you, the rest of them will be more lighthearted and funny.  Any if I’m looking for funny, I can’t do better than this Old Spice ad hawking a Christian catalogue (h/t Tristyn)

My boyfriend and I disagree about how funny the next video is — he swears by it and I swear at it.  Brace yourself:

I cannot tell a lie, I would very much like to attend a service at the SciFi and Fantasy Friendly Church that Pharyngula linked to.  Lo! 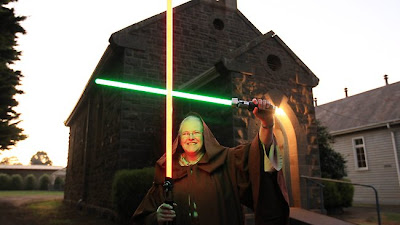 Don’t be so quick to write off that kind of service.  The best conversion story I’ve ever read was posted this week at Why I’m Catholic by a former Wiccan practitioner turned Catholic.  Check it out:

I also enjoyed comic books. (Bear with me; this will all tie together in a moment.) My favorite character was from The Uncanny X-Men, a blue, fuzzy mutant with a spaded tail and a penchant for swashbuckling with a sword. His name was Nightcrawler, and he was a devout Catholic–possibly the only devout Catholic to ever star in comic books. He was something new in my (admittedly limited) experience at the time–a Catholic clearly in love with God, and clearly happy about it.

My affection for the character soon translated to my creative free time. I started writing stories for my friends, and eventually role-playing the character in a comic book RPG. I played in other RPGs as well, and wrote on a semi-pro level in the fantasy and horror genres. Far more often than I intended, my original characters would end up Catholic, too. As a result, I was often challenged by other players and readers about my characters’ motivations, which forced me to turn to Catholic apologetics so I could accurately defend the reasoning behind my characters’ actions.

I confess, I am charmed.

My blog mainly focuses on the clash between Christianity and atheism, but there’s no reason I need to be that limited on a humor post.  I was quite amused by this relyricization of Lonely Island’s “I Just Had Sex” to become “Just Had Chametz” in honor of Passover.

April 8, 2011 Where Yuan Went Wrong (Part 2)
Recent Comments
3 Comments | Leave a Comment
Browse Our Archives
get the latest from
Catholic
Sign up for our newsletter
POPULAR AT PATHEOS Catholic
1