Before I start the Quick Takes, I have to announce the next stage of my Ideological Turing Test — a challenge for individual Christians and Atheists to see how well they understand each other.  This past week, Christians and atheists both answered questions about Christianity and the atheists tried to are trying to imitate Christian respondents well enough to blend in with them.  Now, you can be the judge.  Read through the responses and vote on whether you think each entry was written by a sincere Christian or a shamming atheist.

Last week we ran the same experiment in reverse, with Christians and atheists both answering questions intended for atheists.   The winners of that round (with accompanying charts and statistics) will be announced once this round of voting closes.  (All inspired by Bryan Caplan’s Ideological Turing Test).

Some weeks I struggle coming up with 7 Quick Takes themes.  This is not one of those weeks.  I’ve just returned from the midnight showing of Harry Potter.

I have some opinions about the movie (some of which are relevant to this blog, insofar as they’re about Harry’s role as a Christ-like redeemer), but, for now, let’s just revel in the series to date.

Were you aware there is an entire genre of music about Harry Potter known as wrock (wizarding rock)?  Were you aware that the band Alas, Earwax has a Raffi-like singalong about Professor Quirrell’s symbiotic relationship with Voldermort titled “There’s a Face in the Back of my Head?”  Enjoy:

I would gladly dress up for more movies and attend more midnight release parties for books, if only those options more frequently available.  Harry Potter isn’t my all-time favorite series, but I’ve loved getting to be unrepentant nerdy in public (and seeing everyone else swept up in the fandom).

Pre-college, kids my age tended not to like me and I was leery of reaching out to them.  But the Potter books gave me a sure-fire way to open up conversations with almost anyone.  It was a tremendous gift to finally have something in common with everyone. 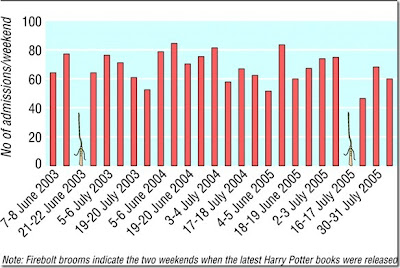 The Harry Potter series had a salutary effect on more than my social life.  According to a study in the British Medical Journal, hospital ER visits for children who suffer accidents take a nose dive whenever a new book in the series came out.  The kids were all busy reading instead of roughhousing.

Oh, and speaking of science and Harry Potter perhaps now’s the appropriate time to mention that the only academic paper I’d ever given at a conference was a lecture on the genetic theory of wizardry at Azkatraz 2009. 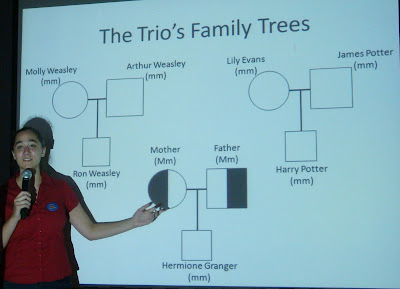 I still have the powerpoint and the audio recording of the talk, so let me know if people would like me to put them up somewhere.

Oh, and at some point during the series’s run, it provided me with fodder for two essays that went up on The Huffington Post.

Judging by the search terms that bring people to this blog. some people out there are still trying to find the Harry Potter fanfiction I wrote in high school.  Well, tough luck.   I will, however share two good authors if you’re looking for fiction to read.  As I’ve mentioned here before, I love Eliezer Yudkowsky and his series Harry Potter and the Methods of Rationality.  I also really enjoyed Cassandra Clare’s Draco Trilogy (a little hard to track down, now that Clare’s a bestselling YA author, but it’s better than her original works).

And, finally, I’d like to end with another song about the bond between Quirrell and Voldemort.  This one’s from A Very Potter Musical and, as you’ll see if you watch it, it makes the objectively correct costuming decision.

July 15, 2011 Vote on the 'Christian' Turing Test!
Recent Comments
9 Comments | Leave a Comment
"On that note... I recommend every Catholic and Christian have that post a read. Click ..."
Oktavian Zamoyski Effective Altruism and Caritas [Radio Readings]
"I think too many people have grandiose and unnatural ideas about charity. It becomes a ..."
Oktavian Zamoyski Effective Altruism and Caritas [Radio Readings]
"Jesus wasn’t resurrected as a great miracle simply in order to convince people to believe ..."
John The Two-Lazarus Problem
"The cartoon is amusing, but flawed. One of the four virtues of Stoicism is Justice; ..."
Vulpes Inculta 7QT: Stoicism Man, Semi-Imaginary Money, and ..."
Browse Our Archives
Related posts from Unequally Yoked