Recursing on the Trinity 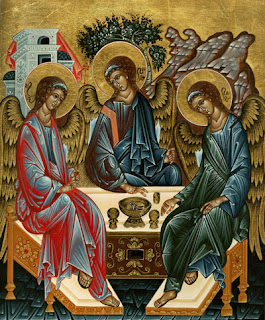 In a recent RCIA class, the lecturer was going over the concept of the Trinity and mentioned this doctrine was often the target of attempted atheist debunking. According to him, atheists latch onto 3 != 1 as proof that Christianity is riddled with irrationality. He then offered a riposte to this objection and moved on with the explanation.

I feel obligated to point out that the 3 != 1 is not the true rejection of any atheist I know. There are a lot of other beliefs that the Trinity is predicated on, and, if you’d managed to convince me to accept the existence of a God, and then the existence of a Christian God, I’d be inclined to give you the benefit of the doubt when you make the case for a more abstract, less relevant to daily life part of your theology.

Whether or not I find the concept of the Trinity coherent is mostly irrelevant to my appraisal of Christianity. It’s a textbook case of privileging the hypothesis. The amount of evidence you’d have to show me to persuade me that the Trinity is plausible is pretty close to the amount you’d need to convince me it was true. It’s internal to the question of Christianity’s validity; someone outside the religion doesn’t have opinions on that level of granularity that are independent of their opinion of the religion as a whole.

So that should be enough of a caveat/explanation to make it clear that my question below is posed out of a spirit of curiosity, not because it makes much of a difference to my atheism. But I’d still be interested in hearing explanations from Christian commenters. Here goes:

The way it was explained to me, God-the-Father and God-the-Christ exist as two Persons in one Being. God knows the Christ fully and perfectly, and, because the Christ is perfectly good, God’s love for Him is also full and perfect and the same process runs in reverse. This infinitely perfect love flowing between the Father and the Christ causes the Holy Spirit to proceed from the Father and Son. I’m pretty sure I’ve got it right up to there.

What I want to know is why the process terminates there. Presumably the Father and the Christ both know and love the Paraclete fully and perfectly and It returns their love. Why doesn’t another Person manifest as the result of that love which itself is loved, causing the issuance of a new Person to be loved and so on and so forth?

Not a particularly pressing problem for me, but algorithmic minds want to know.

October 4, 2011 Looking Askance at Angels
Recent Comments
3,505 Comments | Leave a Comment
"Jesus wasn’t resurrected as a great miracle simply in order to convince people to believe ..."
John The Two-Lazarus Problem
"The cartoon is amusing, but flawed. One of the four virtues of Stoicism is Justice; ..."
Vulpes Inculta 7QT: Stoicism Man, Semi-Imaginary Money, and ..."
"Do You Know what isn't Fair? Calling Atheism a Religion. Or saying Dawkins is a ..."
skwills Who Gets to Give the Courtier’s ..."
"Oh! And you can get there via Naval Gazing.(probably not by Navel Gazing...)"
TheSparksFlyUpward Too Sucky To Be True
Browse Our Archives
get the latest from
Catholic
Sign up for our newsletter
POPULAR AT PATHEOS Catholic
1

On the Patriot Front's Appearance at...
Steel Magnificat
Related posts from Unequally Yoked