Church and State: Two Disputedly-Valued Things that Go Terribly Together

Ok, here comes part two of my reply to Mark Shea’s post about New Atheism’s Kinetic Military Action on Christmas.  Part one focused on the reasons you might want to think twice before you complain a group hasn’t been victimized enough by a crime to be entitled to be upset.  Now, on to the specific tactic of resolving those disputes in court.

If you hate the lawsuits, change the law

It’s one thing to contend that declaring a statewide Day of Prayer (with or without reference to a specific deity) doesn’t violate the Establishment clause, but I have no patience for Christians who acknowledge that this kind of behavior is illegal, but atheist lawsuits are worse because they’re in such poor taste.

I don’t agree with every suit the Freedom from Religion Foundation or the American Atheists file, but the merits are decided in front of a judge, not by my personal sense of propriety.  As I wrote when discussing the World Trade Center cross suit, if we only litigate the Establishment violations that are universally acknowledged as over the line, we’re doing a shoddy job of protecting the law.  If the system is working, we’ll bring some ‘obvious’ cases, some ambiguous ones, and some that provoke a lot of outcry, we’ll win and lose on the merits, and the cases can give guidance and precedent to guide government agents in future situations.

We don’t live in a common-law system.  Everyone is poorly served when we ignore bad law instead of repealing it.  If you oppose these lawsuits, join the folks who want to change the law or amend the Constitution to let the State openly endorse certain religions or religious practices.  And that way you’ll need to make an affirmative case for your change in the public square instead of sighing about how whiny and petulant the atheists are.  (We’re the reason you can’t have nice things). 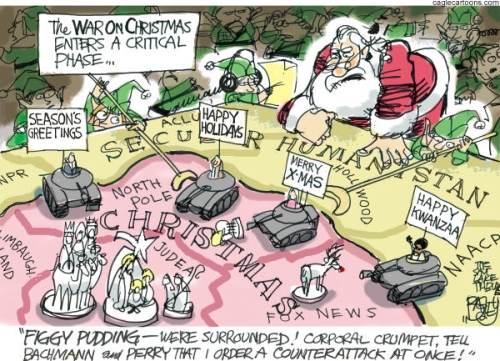 Seriously, Church/State crossover is bad for you guys too

If I had a nickel for every time this month I saw a Catholic blogger complain the penitential spirit of Advent had been eclipsed by the commercialist spirit  of American-style Christmas, I’d have enough money to buy my own Official Red Ryder Carbine-Action Two-Hundred-Shot Range Model Air Rifle.

When government appropriates religion, its ecumenical vision tends to look a lot like Moral Therapeutic Deism.  It’s all pablum and satisfaction with the status quo and none of the demands that (right or wrong) makes the truth of a religion a consequential question.  Bland state-sponsored worship will almost always eschew the intense blood-and-humor attitude Shea champions in favor of boring old warm fuzzies.

And your religion’s not likely to do much better if it gets enough power to impose the nuances of its faith by fiat.  Conversions under duress tend not to ‘count’ in most soteriologies and are arguably blasphemous.  Yoking spiritual and moral guidance to all the unpleasant compromises required to administer a government tends to engender cynicism.

So, by all means have your church evangelize and organize public shows of faith, but recognize that if your parishoners  or targets are depending on the governor of Arizona to feel spiritually fed, you’ve already lost them (and deservedly so).

December 13, 2011
Tis the Season for Church-State Lawsuits!
Next Post

December 20, 2011 Tuesday is Science Section Day
Recent Comments
37 Comments | Leave a Comment
Browse Our Archives
get the latest from
Catholic
Sign up for our newsletter
POPULAR AT PATHEOS Catholic
1